In the late 1880s, George Vanderbilt purchased unbelievably expansive tracts of land in western North Carolina.  Some of the land was denuded by excessive clearing of the trees and poor maintenance of farm land.  When Vanderbilt began construction of his mansion (here), he hired Frederick Law Olmsted  to design the landscaping and Gifford Pinchot as forest manager.  Pinchot and later Carl Schenck developed plans for restoring and maintaining the surrounding forests.  They founded the first school of forestry in what is now part of Pisgah National Forest.  Today the Cradle of Forestry (here) provides a closer look at the forestry school begun by Schenck.  Easy trails wind around the various buildings where volunteers perform duties in the same manner as the people did in the late 1800s and early 1900s.  Women make corn husk dolls, spin, weave, cook, wash clothes, etc., while the  men whittle, make wood carvings, black-smithing, and work in the garden.

There are many activities held at the Cradle of Forestry and one of our personal favorites is the Forest Festival Day during which students at several universities compete in old lumberjack activities.  The competition this year was held Saturday, October 1 with five schools competing. 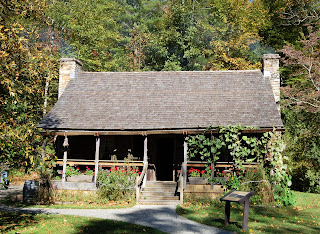 It was a beautiful day with bright sunshine and a nice breeze.  My husband and I laughed as we drove through the entrance and saw so many people with caps, gloves, and heavy coats.  "Must be tourists," my husband quipped.  We stopped laughing shortly after we got out of the car.  We surely should have known better.  After all, the Cradle of Forestry is at a higher elevation than our house and is always cooler.  Large trees keep the trails shaded.  And we really under-estimated﻿ the strength of the constant wind.  My husband was wearing a long-sleeved tee shirt.  I was wearing a tee shirt and a very light-weight denim jacket.  I think each of us was hoping that the other would suggest that we venture to the gift shop and buy a couple of  heavy sweatshirts.  But I wasn't about to be the one labeled "wuss" for the rest of the day.  And apparently my husband wasn't going to do that either.  I gave a thought to suggesting we get a souvenir at the gift shop (and mine would be something in fleece) but that really would have been a bit obvious.  So we traipsed along the trail our noses and fingers turning blue.  We went through a tunnel under the highway and now we know exactly what a wind tunnel feels like!
Some of the spectators, dressed more appropriately for the weather than we were. 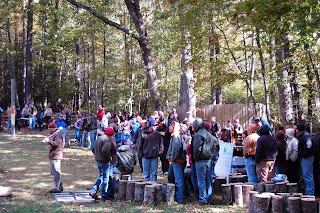 In the log-rolling event, the students must move a large log from one end of the field to the other, turning the log around at the center and rolling it through two markers. 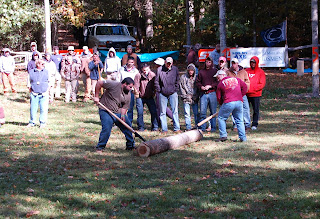 I took a lot of pictures of the blacksmith.  Why?  Because the heat from his fire felt wonderful.  I had to move away, though.  The only way I could get a photograph was to ask someone to move for a minute.  And the guy clearly wanted his place back so I had to move on. 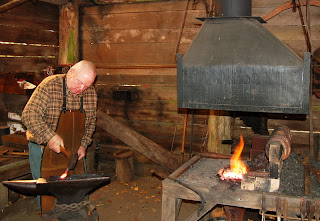 I bought a cup of coffee despite having already consumed my quota for the day.  I didn't drink any of it, but held on to the warm cup until it got cold.  My hands said "thank you very much."
For once, the mascot for Haywood Community College welcomed the warmth of his costume.  He is waving to a little girl about three.  She smiled, but when the mascot took a step towards her she jumped into her mother's arms. 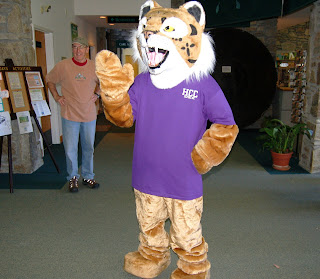 It was a grand day despite the fact that we were not prepared for the chilly weather.  You would have thought that the frost at our house that morning might have given us a clue.  Oh well, live and learn.
Posted by NCmountainwoman at 1:11 PM

I do believe that our day trips on the Blue Ridge Parkway back when we lived in the Asheville/Waynesville area were the genesis of Mike always packing a long sleeved shirt for me. I was ALWAYS cold. I can remember going up to craggy gardens for a picnic in May & sitting all huddled under a blanket :)

It was chilly here too but we heard some of the mountain areas had something I think they called brem frost...I beleive the said the fog froze??!!
We had to turn on our heat this morning.
Hugs Madi and Mom

What an interesting day you had - love the way you tell it! Had to chuckle at the way you said you laughed at all the tourists! So often I've felled a judgment only to have to eat my words, lol! You probably could have handled the cold if it weren't for the wind making it worse. Sounds like you had a great time and made a fun memory!

Thanks always for your kind comments on my blog!

Darn, I wish I was there!

I laughed at how you both resisted purchasing clothing....so you would not be labeled a wuss.
I think I love your relationship. :)
Looks like a really fun day too...so, no log rolling for the two of you???

What a delightful day you almost had. I would have bitten the bullet and bought a ton of fleece. I love the cold if dressed for it.
Good thing the log rolling wasn't in the water.

As you're thinking about this post, run and put some warm articles of clothing in the trunk. You may never need them, but you won't be caught empty handed ever again. I keep a wool sweater in my car just in case. I used it just the other night.

Obviously this fellow (Vanderbilt was it) must have had a few bucks to hire such famous people to help him fix the place up a little. :)

You had me laughing about your "stubborn contest" with your husband (that's what we call those situations in our marriage:).

It sounds like a fun day of celebrating the early days of the forestry school. Lots of fun, even if cold.

All winter long (starting about a week ago), I keep winter clothes, chemeical hand and foot warmers, and a sleeping bag in my vehicle in case I get stuck in a storm. Maybe you should try the winter clothes part? :)

I was familiar with Biltmore Estate, but didn't know about the Cradle of Forestry. Vanderbilt certainly hired the A Team. Gifford Pinchot is viewed as the father of modern forestry. And thanks for the reminder about warm clothing. We're about to head up into the Blue Ridge. Jim

This looks like a fascinating day. We visited the Cradle of Forestry last year. I wish we had known about Forest Festival Day. We'll have to be on the lookout for it next year.

What rich history you brought us with your wonderful day trip!!!

I'm so thrilled ya'll had a great day to enjoy all the festivities and that you invited us to tag along!

God bless ya and have an incedible day sweeite!!! :o)

This is exactly why Grenville always suggests that I leave a sweatshirt in the car during chillier months, as he already does. Bravo to you both for not giving into the urge to buy an overpriced fleece or sweatshirt. bet you too will carry a spare. Looks like it was a good day to be out and about.

Beautiful place. I love your post and blog. I'm from North Carolina too. The far Western Part of the State.. I'm your latest follower..Susie

Bug - We have gotten surprised as well. When our kids were little we took them tent camping on Mt. Pisgah. Imagine our surprise when we awakened to two inches of snow!

Madi's Mom - Yes, when the fog freezes it makes for dangerous ice.

Karin - In spite of the cold, we really did have fun.

Ms A - I wish you were here in the mountains as well.

Suz - Those logs were huge. I was amazed at the ease with which the students moved them.

Patti - We enjoy the cold brisk fall days as well. Especially when we are dressed for it.

Rudee - I actually do have a sweater in my own car, but we took my husband's 4x4.

Troutbirder - The amount of money George Vanderbilt had is unbelievable. The house in Asheville was only one of the three mansions he owned, not to mention the land.

KB - We can make almost anything into a challenge around here.

Jim - Hope you have a great trip.

George - Be sure to take a jacket and some gloves!

Nezzy - Thanks for dropping by.

Beatrice - We were in my husband's 4x4 and I will definitely put a sweater in it like I have in my own car. Unfortunately it will soon be covered in dog hair.

Susie - Glad you dropped by.

An interesting day despite the cold. Had to laugh - how pride sneaks in and holds us captive. Been recognizing how quick pride tries to slip into my own life these days - definitely needs vigilance LOL.