And So Lucy is Back

Life has been good up here on the mountains.  We have had lots of much needed rain although we are still far below normal.  Everything is green and the dogwoods and mountain magnolias are blooming throughout the forests, adding their lovely white to the various shades of green on the hillsides.  Our injured player is very nearly back to normal and life is rich and good.

Why, then, am I so disconcerted?  Why this feeling of unease that permeates my soul?  It has to do with government, both Federal and State.  I watch the "news" only to get the weather reports for the real climate.  Yet I'm drawn Online to newspapers and publications that give me the current political climate.  Difficult as it is, it's a bit easier to digest in print.

I think my biggest concern is that for the first time in my life, I have little or no respect for people who still support certain leaders.  In the past I've had many friends whose politics differed from mine.  I still respected people who have supported leaders whom I did not care for.  But this time it is quite different.  For the first time in my life I consider certain people no longer important to me because of their political support for certain leaders and the direction our country is heading.

I need to be more like our Lucy.  She does not worry about anything.  She doesn't even fear we might forget her breakfast or dinner, because at the appropriate time she will lie down in front of the person in charge of feeding her.  When that person gets up, she runs to her room and stands next to the dog food bin.  Just in case we might have forgotten where the food is kept.  If the day is rainy and cool, she doesn't care that it's mid-April.  She is happy enough to lie amongst her pillows and watch the rain.  She doesn't care about anyone's politics.  She is interested only in whether or not they are willing to pet her.

Perhaps she does worry about things.  Because every now and then she hides her head under a chair. Or other times she will root one of her pillows until it covers most of her head. I really don't think she is worried, but I'm not sure what it means.  I'm sure she is not feeling the same things I am when I want to go lie in bed and cover up my head to get away from worry.

I have no idea why this is comforting for her.  But it seems to be. 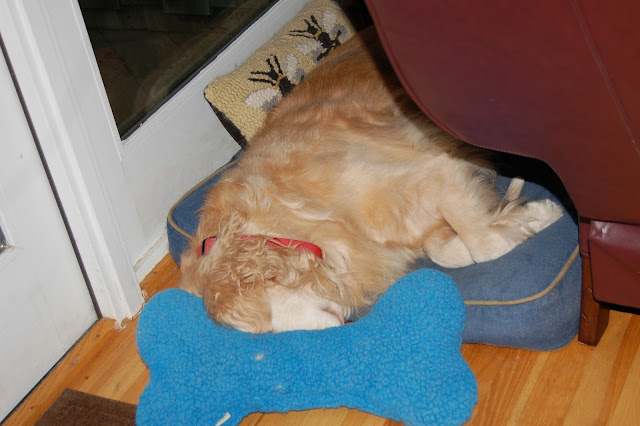 OK.  Stop it.  No more ranting.  I truly am trying to be more charitable to people on the other side of this humongous divide in which we live.  But it is so very difficult for me.  And believe it or not---I accept that they are having just as much difficulty in respecting my views as well.  So we all have a lot of work to do. And I admit it has to start with each of us.  And I will try. For a while I was content to simply write off these people and I know that is not fair.  Every single person with whom I come in contact has something to teach me.  And I'll never learn that with my mind as closed as it has been since November, 2016.

So I will heed the words of those much wiser than I.  Beginning with this quote from Mahatma Ghandi:

“You must not lose faith in humanity.
Humanity is like an ocean;
If a few drops of the ocean are dirty, the ocean does not become dirty.”

Posted by NCmountainwoman at 1:20 PM 9 comments:


Seems as if I've been absent for quite a while.  I did have a good  reason for putting the blog on hold.  I was caring for an injured player and taking on the many household duties he normally performs.  But truth be told, I have actually been apathetic about my blog.  Some call it a lost muse.  Whatever it has been, I have not missed writing and I have managed to keep up with most of you even if I might not have commented.  Now it's time to decide whether to continue so I will give it a try.

The injured player is nearly normal now and we are delighted.

Like much of the country, we have had very strange weather indeed.  Temperatures all over the place. We are turning on the air conditioner one day and turning on the heat the next.  But some things remain constant.  Our woodpeckers are nesting and we are almost certain one pair of Pileated Woodpeckers has a nestling.  The adults come to the suet to eat and then grab a mouthful for carry-out.  Our Ruby-throated Hummingbirds are back and the spring migration is in full swing.  The trees are filled with American Goldfinches as the migrants join our resident birds for a while.  The Purple Finches are leaving us for parts to the north.  And we've had several little Red-breasted Nuthatches join our large White-breasted Nuthatches for a brief while.

One of our favorite visitors is passing by now and we are always delighted to see them.  These lovely migrants are the Rose-breasted Grosbeaks.  The males always come first and in a week or so are joined by the lesser brilliant but still beautiful females.  Not long after the females arrive, the males will move on to the north followed a week or so later by the females.  How lucky you are if you live where the gorgeous birds nest and raise their broods.  Still we are happy to have them for the few weeks that we do.

The male Rose-breasted Grosbeak takes a break while getting a drink of water. 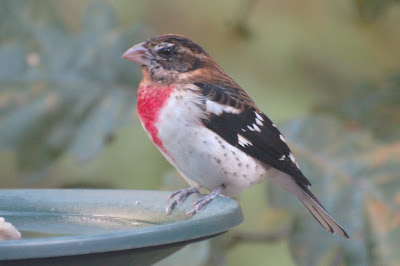 In coming days we will welcome more migrants.  And throughout the summer we will take delight in seeing adult birds bring their fledglings to our feeders.  It's a great time of year.

Seeing these lovely birds gives me great solace in times of such concern over our Mother Earth and what is happening all around us.  But sitting on our deck and watching all the wonderful birds fills me with peace.  Would that it could last.

Posted by NCmountainwoman at 5:05 PM 12 comments: