With a broken heart I need to tell you that our dear Ellie died quite suddenly yesterday.  She seemed so healthy and happy and had a great day.

My husband took Ellie and Lucy out for a short walk around 2:00.  Both were frisky and playful.  As they approached the house, Ellie collapsed and could not get up.  She did not even try to get up, simply lay quietly looking at us.  She was not in pain, not struggling to breathe and was not unconscious but very lethargic.  We rushed her over to the animal hospital.  Tests showed that she was bleeding internally and had fluid in the sac surrounding her heart. 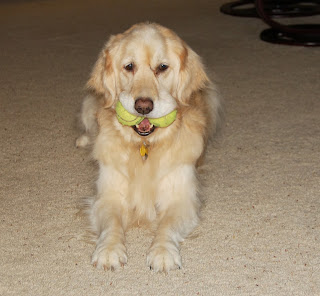 They prepared her for aspiration of the fluid but she had a cardiac arrest before they could attempt it.  She died on the operating table.﻿ 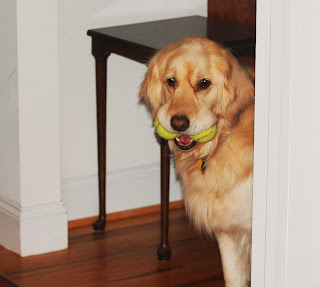 Ellie died of hemangiosarcoma in her heart.  She had collapsed when it started to bleed.  She had no previous symptoms and we had no reason to believe she was anything other than the picture of health she appeared to be.

Our house is unbelievably sad and quiet today.  So many little things trigger the tears again.  I won't be posting for a while.  We need to grieve...my heart dog.  Ellie had a wonderful life and gave us more joy than you can possibly imagine.  We will always hold her in our hearts.


Posted by NCmountainwoman at 8:37 AM 43 comments:

The leaf peepers have gone and we have the mountains to ourselves for a while.  The dogs love Autumn, the brisk mornings and sunny days.  They especially love running through the fallen leaves.  There are several picnic areas that are deserted now and great places for the Golden Girls to run off lead. 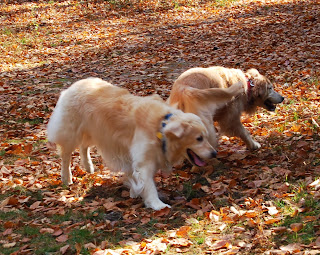 No destination.  Just milling about. 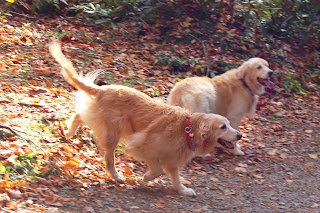 We make them sit and rest after having a drink.
Look at those smiles! 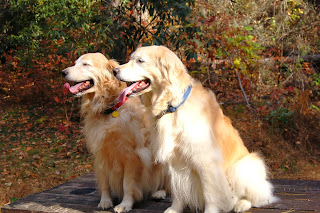 Life is definitely better in the mountains. 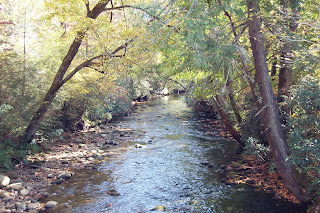 And here we are in November already.  The colors are mostly gone with some red remaining.  High winds are clearing the trees of the remaining leaves and the streets are covered with them.

HAVE A WONDERFUL AND SAFE WEEKEND, EVERYONE!!!
﻿
Posted by NCmountainwoman at 10:41 AM 10 comments:

Another Year and We Still Remember

Each year I re-post this story in memory of two marvelous people whose lives tragically ended on the mountain trails.

They first met on a blind date and took to each other instantly.  Much of their courtship consisted of hiking in the mountains of western North Carolina.  She was three years his senior, a fact that brought many laughs in years to come.  They were married in 1949.

He became a lawyer.  A lover of animals, she became a veterinarian, rather unusual for her time.  Her continued quest for knowledge led her to take courses in forestry, ichthyology, and she loved and studied all things living.  She would later give up her veterinary practice to take college-level courses full time.

They lived in Montana and in New York, but their passion was for western North Carolina where they always intended to retire.  The couple were true lovers of the outdoors.  When their children grew up they traveled extensively, hiking some of the most rugged mountains in the world.  They always stayed at hostels or inexpensive lodging because, as he said, "You meet so many more interesting people that way."

When they were in their 50s he hiked the entire Appalachian Trail from Maine to Georgia.  She joined him for parts of the hike and they celebrated with champagne at the end of the Trail.  Other hikers were delighted with her ability to identify every tree, every bush, and every flower along the trail.

All photographs taken from local newspapers. 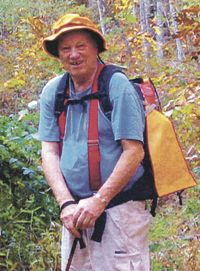 In 1990 they moved to the North Carolina mountains they loved so much.

She was an avid gardener and an award-winning quilter.  Their passion was hiking, especially the lesser known trails in Pisgah National Forest.  They were stewards of the environment, purchasing land in their community and donating it to be a nature preserve.

This photograph was taken in the last year of their lives. 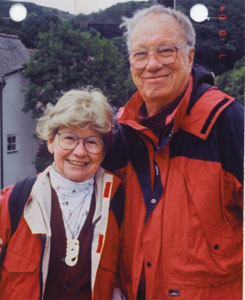 After 58 years of marriage they were deeply committed to one another.  They continued to hike together every week when she was in her 80s and he almost 80.  In all seasons they hiked together.

This photograph was on their last Christmas card. 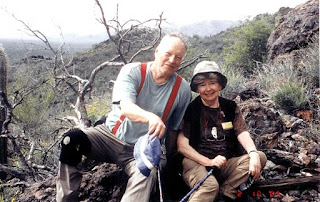 On October 21, 2007 they went for a hike in Pisgah National Forest.  Their son who lived out of State became worried when he didn't hear from them as usual.  He contacted their neighbors who also were concerned that they had not returned.  The son called the local police and a search was begun.

Their car was found near a trail head here in Transylvania County.  On November 9, 2007 her body was found near the trail.  Telephone records showed that she had made a "911" call from her cell phone on October 21 but the signal was insufficient to relay beyond the tower.  Their bank card was used in nearby Tennessee.

Irene Bryant had died of blunt force trauma to the head.  Her husband John was still missing.

In February 2008 the remains of John Bryant were discovered near a forest service road in upstate Georgia. He had been shot in the head.

Evidence linked the senseless killings of this wonderful and devoted couple to Gary Michael Hilton.  He appears to have been a serial killer preying upon hikers in the mountains of Georgia, NC, and FL.

On Februray 1, 2008 Hilton pleaded guilty to an equally senseless murder of 24-year-old Meredith Emerson in Georgia.  (Interestingly enough, he was captured primarily because he kept Meredith's dog who was hiking with her.  He says he "just couldn't bear" to kill the dog so he kept it.)  Under the terms of the plea he was sentenced to life in prison with the possibility of parole in 30 years.

He was tried in Florida for the murder of Cheryl Dunlap, a 46-year-old nurse.  He was convicted of first-degree murder and sentenced to death on February 21, 2011.

Hilton was extradited to Federal Court in Asheville and charged with murder, robbery, and kidnapping in the cases of John and Irene Bryant.  He initially entered "not guilty" pleas to all counts.  After lengthy delays, hearings, and new attorneys, Gary Michael Hilton pleaded "guilty" in March 2012 and was given a life sentence.  He was returned to Florida's death row where he awaits execution.

This post is not about Gary Michael Hilton.  It's not even about justice.  There is no justice here.  There can be no justice for such heinous actions upon such wonderful people.  This post is about two of my heroes...John and Irene Bryant.

They left behind a legacy of love.  Love for one another, their children, their fellow man, and the future.  Love of nature, love of the outdoors, and love for these wonderful North Carolina mountains.  They are together once again in spirit.  And still we grieve.  They left the world better than they found it.  We can all take a lesson from John and Irene Bryant.  Live your life to the fullest and give back to nature and to humankind.

It comes as no surprise that Halloween is celebrated big time around here.  After all, we live in Transylvania County.

Our newspaper features this heading on October 31.﻿

Halloweenfest is the second most popular festival in Brevard.  Food and craft vendors line the streets and music fills the air.  There are costume contests, cooking contests, fiddling contests, bouncing houses, festival food, and fun for all ages.  The weather was perfect this year.
One big event is the pumpkin roll down jailhouse hill.  (Never mind that the jail is no longer located there...it will always be jailhouse hill.)  The children line up in waves according to age and roll the pumpkins, hoping to miss the barriers and make it to the end.﻿
I love the looks on their faces as they let the pumpkins go. 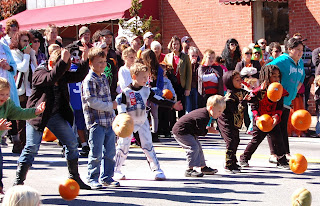 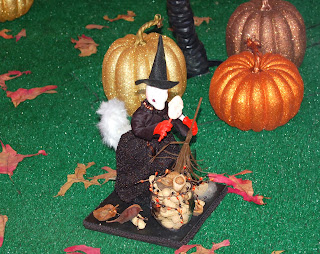 Putting greens provided some challenges for the little ones.  With adult-sized clubs, they tried to hit the holes.  One little princess decided the challenge was too great.  She picked up her golf ball and placed it next to the hole.﻿
No doubt a golfer in the making. 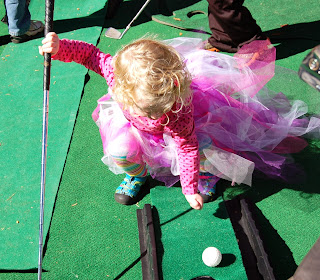 I loved this little toddler cow.  Even in public places, I always ask permission to photograph a child.  The mother said, "fine."
﻿
Isn't she adorable? 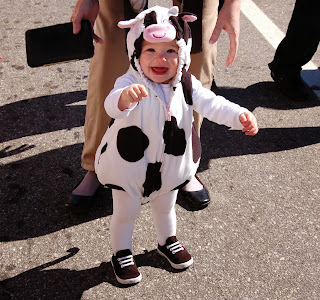 She started running toward me giggling all the while.  As soon as I snapped the second picture, she was grabbing my knees and hugging me, yelling "Up! Up!"  Her mother ran after her laughing, "She knows a friendly face when she sees one."﻿ 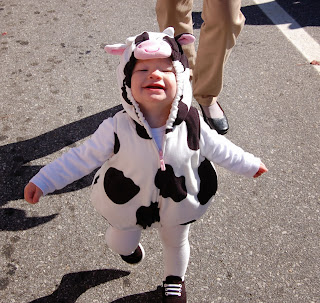 Many of you will have the opportunity to perform your most important civic duty tomorrow.  Get informed.  And VOTE.  Even if it's a choice between the lesser of two evils.

Posted by NCmountainwoman at 11:00 AM 10 comments: