Another topsy-turvy  week for us.  Thunderstorms brought heavy rain almost every afternoon.  As I've mentioned before, Lucy doesn't mind thunder and loves to sit on the screen porch and watch the rain.  She does not, however like to be outdoors in the rain.  I think it's the drying off part that she dislikes most.

Another thing she loves is the fireplace.  She loves it on winter mornings when we light it to take off the morning chill.  She also loves it in the summer because there is a spot of hardwood and the stone hearth for coolness. 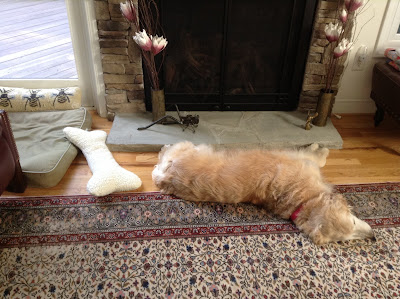 I'm going to be taking another two-week break.  Our daughter is coming for a visit and we will ride the mountain roads come rain or shine.

It is wise to heed the words of those more articulate then I when you become so frustrated with the goings on in our world.  These fine words come from Ada Louise Huxtable, Pulitzer winner in 1970.

Summer is the time when one sheds one's tensions with one's clothes, and the right kind of day is jeweled balm for the battered spirit.

A few of those days and you can become drunk with the belief that all's right with the world.

Here's hoping that we all can have some of those jeweled balm days.  Heaven knows we have a sufficiently battered spirit.

HAVE A MOST WONDERFUL WEEKEND!

HAPPY FATHERS DAY TO ALL FATHERS

Posted by NCmountainwoman at 3:08 PM 13 comments:

Rethink this one, NBC.

The man is a far-right radio talk show host.  In its profile of him, the Southern Poverty Law Center described him as "the most prolific conspiracy theorist in contemporary America."

All images from the Internet 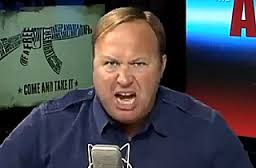 The man claimed the attacks on September 11, 2001 were perpetrated by the US government.  As were the Oklahoma bombing and Columbine shootings.

The man called the shootings of the Pulse Nightclub in Orlando a "false flag terror attack" (one of his favorite terms) orchestrated by the Obama administration to enhance the acceptance of the LGBT communities.

The man claimed the Clintons are murderers.  Beginning with the suicide death of Vince Foster and continuing through the slaying of five police officers in Dallas. 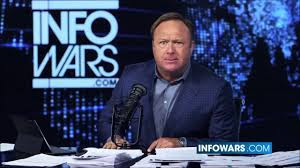 The man said his gut told him the death of Antonin Scalia was murder by the Obama administration and warned that Clarence Thomas would likely be next.

The man said the Boston Marathon bombing was nothing more than another "false flag terror attack," this one designed to take away the rights of citizens to bear arms.

The man said that the US government has a "weather weapon" that can generate and steer tornadoes to certain areas causing floods and thus contributing to the fallacy of global warning.

The man has said far too many outrageous statements to list.  To me, the most egregious of his comments came when he called the 2012 attack at Sandy Hook Elementary School "synthetic, totally fake with actors" portraying the murdered twenty small children and six adults.

In case you did not recognize him in the photographs above, the man is Alex Jones.  And the man was recently interviewed by Megyn Kelly for her new show, "Sunday Night with Megyn Kelly." Outrage followed the announcement of the plan to broadcast the interview, none more poignant than the ones from the parents of the slain children from Sandy Hook Elementary.

NBC has declined to comment about the upcoming broadcast which gives this outrageous man a platform. Megyn Kelly, on the other hand, defends herself by saying that President Trump had praised Jones and had been a call-in to his broadcast.  In fact, Jones was issued White House press credentials.   She further went on to say that many people don't know him and it is "our job" to shine a light.

To make this interview more onerous, NBC plans to air it on Father's Day.  A day when so many fathers will grieve for their children killed at Sandy Hook.  If you are so inclined, you can contact NBC here. 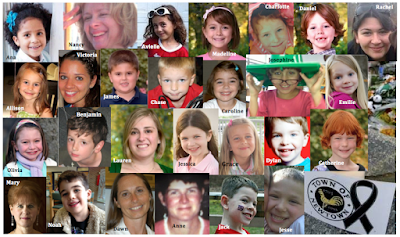 I hope the powers that be will take a look at photographs such as this one and rethink whether it is appropriate to give any credence to Alex Jones.  On Father's Day or any other day.

[Purely Personal Note:  I cannot recall a time when I have objected to an interview without having seen it.  My view is generally "watch it, don't watch it; listen, don't listen; read, don't read."  My objection is not so much on my own behalf.  It's for the parents, victims and relatives still grieving from the horrible acts so demeaned by Alex Jones.  They should not have this dredged up again in such a malicious manner.]

Posted by NCmountainwoman at 2:28 PM 8 comments:

It's June already.  We have immensely enjoyed the number of birds who are bringing their young to our feeders.  It's such fun watching the parents feeding the greedy little ones.  And even more fun when the parents stop the feeding and the young ones must find their own way to the feeders.  Often they make several awkward attempts before they are finally successful.  Soon enough most of the birds will have another brood and we can watch the whole process again.

Lucy is enjoying our weather.  It's cooler than normal with sunny mornings and rain most afternoons. We are fortunate to have several areas where she can run safely off leash. Like the rest of our household, Lucy refuses to acknowledge that she is getting old.  She runs like a puppy but then relaxes the rest of the day.

We have a wide swath of grass between the road and the woods.  Wide enough for a short jog.

Her face shows that she is not pleased with a recall.
We interrupt her fun periodically for no reason. 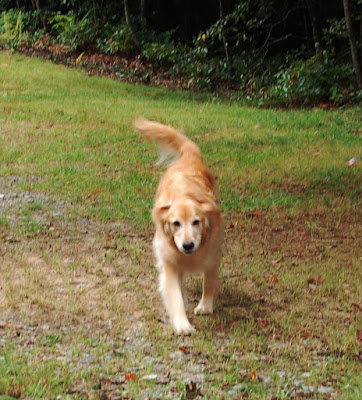 We frequently hop in the car and take a short drive to a park or other grassy areas.  One of our favorites is the top of an earthen dam on one of our lakes.  Although she gets good exercise on trails, she really loves open areas where she can run full speed ahead.


Heading back to the car. 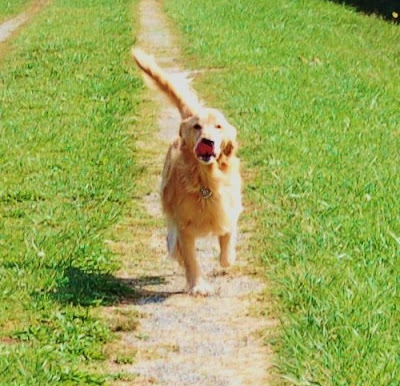 It has been quite an interesting week, hasn't it?  It seems that we are supposed to overlook all the failings of our President.  According to the Speaker of the House  we should take into account that the President "is new at this" and does not understand the protocols of the relationship between the Department of Justice, the FBI, and the White House.  Well, excuse me Mr. Ryan, most of us learned this relationship in grade school.  It's part of that "separation of powers" thing.

"To know what is right and not to do it is the worst cowardice."
Confucius

"I think I am almost too honest to be a politician."
Donald J. Trump

Posted by NCmountainwoman at 4:36 PM 10 comments:


A while back, we gave both our children some of their things we had kept from their childhood days.  Our son took his Christening gown and baptism items, his religious education certificates and achievements among other things.   His favorite lovey was included in the items.

Interestingly enough, the item to which our baby son became attached was a blanket that had been his sister's.  An ordinary pink baby blanket with a satin border.  As he began to add words to his baby sounds, he called the blanket "Pinket."  (Obviously a combination of "pink" and "blanket.")  This blanket and another lovey were with him constantly until he was three or so.  The other item was a small stuffed Winnie-the-Pooh.  Ironically, it also had belonged to his sister who never cared much for it.  (Her constant companion was Eeyore.)  If our toddler son wasn't carrying the two loveys, they were surely somewhere close at hand.  He called them "PinketandPooh" as if it were a single word.

Fast forward if you will to 2017 and the arrival of our lovely little Violet.  Violet's parents are fortunate to have some good friends who are excellent photographers.  One of them came to do a newborn photo-shoot when Violet was two weeks old.  Our son sent me a picture of the photographer taking one of the photographs.  The message was captioned, "You might recognize the blanket."  And there was tiny Violet covered by Pinket.  The same blanket that covered our son forty years ago.  (And his sister three years before that.) 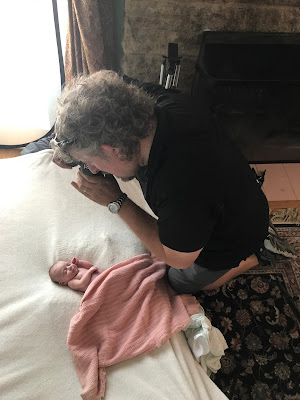 If you click to enlarge the photograph, you will note that the edges of the blanket are frayed.  Over time, the satin border became detached.  I bought the pink satin to sew on a new binding but my husband objected.  He felt replacing the binding might attach too much importance to the blanket.  I suspect that he also thought that the blanket would unravel without the binding and shrink thread by thread.  But somehow the blanket remained relatively intact despite the constant use.

You can't imagine how thrilled I was to see the photograph of our dear granddaughter covered by Pinket.  Who knew when we gave the items to our son that he would have his own daughter so soon? Oh, we are blessed.

Posted by NCmountainwoman at 11:41 AM 10 comments:


Even our trouble-free Lucy looks a bit down.
"No, Mom.  I'm just adjusting my pillows
Ready to relax and snooze again" 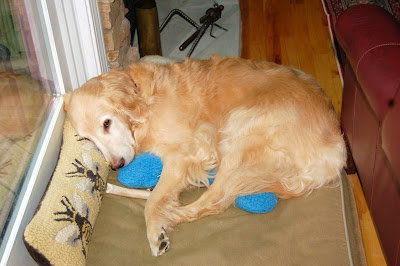 Our little Violet is thriving.  Eating well and gaining weight. Her parents and grandparents are over the moon with delight.  I got a text from a good friend after some particularly onerous happening this week.  She said, "My sincere apologies to Violet since she will inherit a total cluster-f--k."  I must admit that having an infant grandchild makes me even more fearful of our planet's future.

Once again, there are several quotes for today:


And an anonymous one:
"Everything happens for a reason but sometimes that reason is that you are stupid and make bad decisions."

HAVE A MOST WONDERFUL WEEKEND,  EVERYONE!


Posted by NCmountainwoman at 1:34 PM 10 comments: