Lucy selects one or the other of her beds in the great room based on the sun during the day or near the fire at night.  She loves lying in sun, especially during the winter days.  Unlike our Ellie, she does not like it when I bring out the camera. 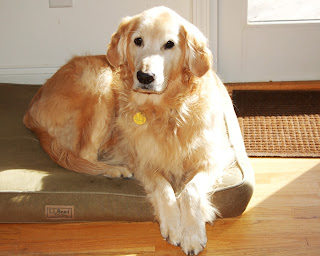 You can make me sit next to the Christmas Tree, but you can't make me smile. 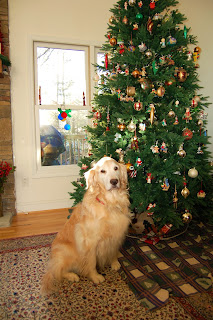 We have company for the holidays, so I will most likely take a blogging break until after the New Year.

Today's quote is from Dave Barry:

In the old days, it was not called the Holiday Season;
The Christians called it "Christmas" and went to church;
The Jews called it "Hanukkah" and went to synagogue;
The atheists went to parties and drank.
People passing each other on the street would say
"Merry Christmas!" or
"Happy Hanukkah!" or
(to the atheists) "Look out for the wall!"

Whatever you celebrate or choose not to celebrate, may the year end well for you.  And realize that the daylight minutes will begin to lengthen in our hemisphere.  And that's a good thing.  Even if it's seconds per day, we'll  be heading in the right direction.


HAVE A WONDERFUL WEEKEND, EVERYONE!

Posted by NCmountainwoman at 4:21 PM 11 comments:

Seriously? You got a television in there?


Sitting back from the road on US 276 near our community is an outhouse.  Looks like a two-seater.  And surprisingly there is a satellite dish on top.  It is on the property of a heating and air conditioning service and installation office.  One has to wonder;  if you have a satellite dish for a television in your outhouse, couldn't you install indoor plumbing? 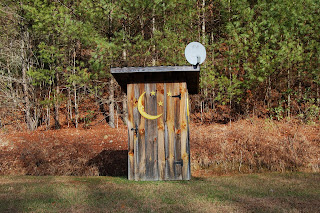 All right.  Truth be told, the outhouse is really a storage shed.  And when you live in the mountains, you place the satellite dish anywhere you can to get reception.  But I do love the sloped roof, the hinged door, and the moon and stars that make it look just like an outhouse.  Makes me smile every time I pass by.  And a smile is always a good thing.
Posted by NCmountainwoman at 11:14 AM 7 comments:


This week here in the NC mountains the weather belies the calendar.  We have had above normal temperatures and sunny weather.  Warm enough to be outside with only a light jacket or sweatshirt.  While we have definitely enjoyed the respite, we are ready for normal winter weather.  And that does appear to be what we will expect over the weekend.

Lucy has enjoyed the sunny weather but I think she would prefer that it be a bit colder.  She is always comfortable in the house, usually on the dog bed near my husband's chair.  Sometimes she slides her head underneath the chair.  I have no idea why.

Wonder if she thinks she is hiding 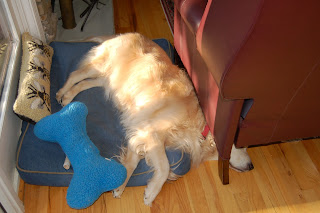 She pays little attention to me as if she really wants to be left alone. 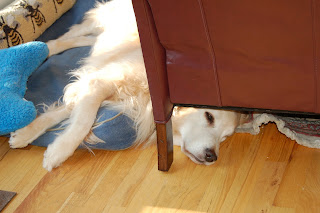 “A human being is a part of the whole called by us universe, a part limited in time and space.
He experiences himself, his thoughts and feeling as something separated from the rest, a kind of optical delusion of his consciousness.
This delusion is a kind of prison for us, restricting us to our personal desires and to affection for a few persons nearest to us.
Our task must be to free ourselves from this prison by widening our circle of compassion to embrace all living creatures and the whole of nature in its beauty.”

Wouldn't it be wonderful indeed if we could embrace all living creatures and the whole of nature?  At least we can try.

Posted by NCmountainwoman at 1:53 PM 10 comments:


There's an old saying about the sky and weather predictions for the coming day.

It is, in fact almost a scientific truth.  When the sky is red at night, it does mean the weather is clear to the west.  And in the US, most weather patterns move from west to east.  So if it's clear to the west, that weather will move to us tomorrow, giving us a nice day.  (Some folks say we here in the east get the west's leftovers.)  The red color indicates more pure color, thanks to the clear western weather.

We cannot see the large expanses of the skies one can see from the western desert or the eastern coast.  When meteor showers are expected, we must drive a fair distance away in order to see enough sky to count the shooting stars.

We cannot see even the sunset from our house.  It sets behind distant mountains not in our view.  But every now and again, we see the reflections of the setting sun coloring our clouds.  And it is indeed a beautiful sight. The bright pink/reddish glow of the clouds in the beautiful blue sky amaze us.  The color is very brief, lasting only a few minutes at most before the moment is lost.


It begins with very bright pink 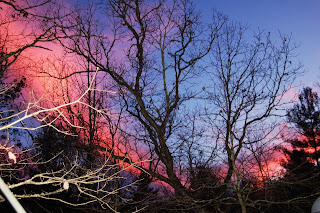 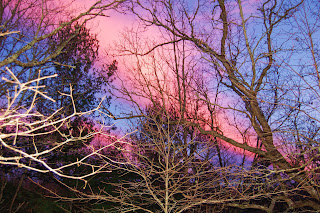 More and more pale in just minutes before it disappears 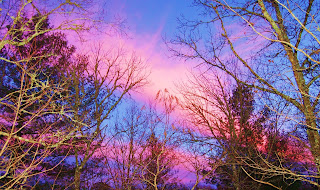 The photographs above were taken from our deck within a few minutes.  By the time I moved to the front of the house, the colors were gone.  That quickly.

But it was amazing while it lasted.  And, yes.  The next day dawned bright and clear.  A welcome respite after several days of rain.


Finally the rains have stopped and we have clear and crisp weather.  We are slowly decorating for Christmas.  It's so much easier since we are retired.  I remember times when we felt obliged to get it all done over a weekend.  Now we decorate over a period of several days.

Lucy is not at all interested in participating in the decorations.  She doesn't even bother to watch what we are doing.  You might think from recent posts that she does nothing more than lie on her bed.  Truth is, she goes for an extensive run off leash in the park almost every morning.  And at age ten, she is no longer a puppy.  So after her runs she does spend a lot of time on her bed with her two favorite pillows.  Lest you think she is really asleep, I can assure you that if the treat jar is opened either upstairs or downstairs, she is alert and ready to find the treats.

She rearranges the pillows to suit her 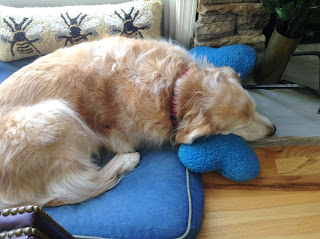 Sometimes she sleeps on her side. 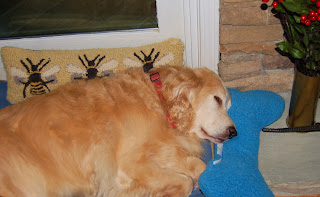 I don't think we have ever had a dog who managed to look more comfortable then Lucy does.  She knows when we go downstairs to the den even when she appears to be sleeping and will get up and come downstairs where there are two comfortable beds there in the den and one in my husband's study.  (Yes, we still have Ellie's bed there.  Can't bring ourselves to give it away.  And sometimes Lucy does lie in it.)

This week brought another tragic shooting, this time in our country.  Again.  And once more it was followed by rhetoric and a refusal by Congress to pass legislation to prohibit even the people on terrorist watch lists from legally purchasing firearms.  Or to strengthen the background check requirements to include Online sales and sales at gun shows.  The Senate Majority Whip (a Republican from Texas) said such legislation violated constitutional rights because someone might be on a terrorist watch list in error.  I obviously have no answers, but I do know that obtaining very dangerous multi-round firearms is far too easy in this country.

So once again, we hold the victims and their families in our thoughts.  And wring our hands helplessly.

Today's quote is from Mother Teresa.

If we have no peace, it is because we have forgotten that we belong to each other.


HAVE A WONDERFUL WEEKEND, EVERYONE
DO ANYTHING YOU CAN TO PROMOTE PEACE


Posted by NCmountainwoman at 4:07 PM 6 comments: