Well, it's been a while, hasn't it?  Actually, I had planned to take another week of blogging break since we were going on vacation next week.  Note that I used the past tense.

The problem started with a routine visit to the veterinarian.  Ellie and Lucy get physicals, including blood work and immunizations in September every year.  So we took them in and they were pronounced to be in excellent health.

A few days later Lucy started coughing and she didn't seem to feel well.  We didn't think too much of it since she is often a bit tired after her yearly immunizations.  The cough wasn't all THAT bad, but it was definitely very different.  We did a bit of research and found that every reference popped up "kennel cough."  We immediately dismissed that.  She gets an immunization yearly, and she has just gotten a new one.  Besides, kennel cough is so highly contagious Ellie would certainly get infected.  And Ellie was perfectly fine.  So we went with the notion that she had picked up a virus or something.

The cough decreased dramatically but she still coughed when she got excited.  So we decided to take her to the doctor just to make certain she was fine.  After all, we didn't want to leave her if she was getting sick.  She coughed only once at the doctor's office.  And that was enough.  Lucy was recovering from kennel cough.  The doctor said they had a patient who had infected several dogs, including his own.  (To his credit, he did not charge us for the visit.)  So a few lessons learned: 1) vaccinations are not 100%; 2) the efficacy of this vaccine wanes over nine months or so even if it is called a "yearly" vaccination; and 3) dogs and kids will get sick at the most inconvenient times.

Lucy was not in much danger of transmitting the cough but that could not be guaranteed until at least two weeks.  So to be 100% sure, she should not be around other dogs. 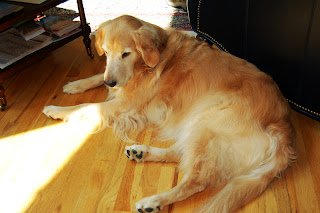 But I don't feel too good. 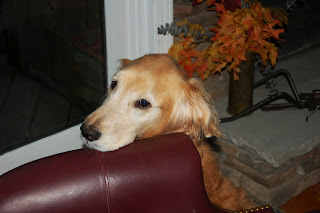 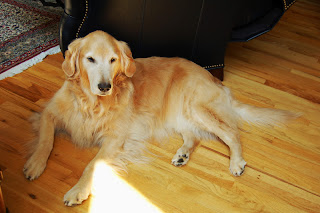 Or rest on the chair rung. 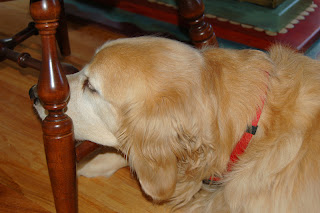 So we called our doggie camp to tell them and canceled our hotel reservations.  We could have delayed our trip for two weeks, but who wants to leave the mountains in the middle of October?  Certainly not us.  So we will take the vacation next spring.

We are among the five "battleground" states in this Presidential election.  We have a race for governor and a heated congressional race.  The television stations in our area have no air time available to sell.  None.  It's all been sold.  So one would think I would have had enough politics.  Nope.  Not me.  I get invigorated by it all because it is more important this year than ever for every single one of us to vote.  So my quotes for Friday will wax political though I will try not to insult anyone.

Today's quote is from the late Edward R. Murrow:

A nation of sheep will beget a government of wolves.

I hope all of you are well on this last weekend in September.  And I hope that you are looking at all the candidates for all elected offices.  If you are voting for judges, PLEASE take the time to find out more about each of them.  It amazes me that so few people actually research the candidates for courts of appeals and justices for the State Supreme Court.  These people make a huge difference in our lives.


HAVE A WONDERFUL WEEKEND EVERYONE!!!

Posted by NCmountainwoman at 9:18 AM 21 comments: