We Still Love Lucy and Update


One day last week my husband was eating his lunch.  Sitting in a recliner and watching the local weather.  I was in the kitchen when he suddenly said, "Oh, my God!  Look in the tree.  QUICK!'

I grabbed the camera and hurried to the door, expecting to see a special bird.  Lucy was at my heels of course and looked out, her body stiff with excitement. 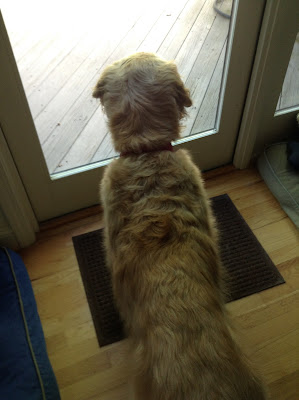 There was no squirrel to see.  Lucy was scanning the deck and did not see what was in the tree.  A big black blob that my brain finally identified as a black bear.  Climbing the tree nearest the deck.  In the middle of the day.

I took two quick photographs only because I had camera in hand.  The bear is hidden behind the leaves but I did not want it to climb any higher.  (Although I did give a fleeting thought to let it climb to a clearing so I could get a good picture.  Fleeting thought, folks.)  My primary fear was that the bear might jump onto the deck when I (hopefully) would scare him away.  The deck is on our second story living space, directly above the screened porch.  (And the screen porch is about twelve feet above the ground,)  So had the bear jumped to the deck it would likely have climbed over the deck railing and then shimmied down the screen  porch below.  Imagine the damage those bear claws would have done on the way down.

Putting down the camera, I grabbed two sheet pans and ran back to the door.  Lucy was aware something serious was going on but still had not seen the bear.  She was still scanning the deck.  I prayed that she would not try to bolt out the door when I cracked it open to bang the pans together.

Bear in the tree.  Likely a second year cub whose mother had "kicked" him out on his own. 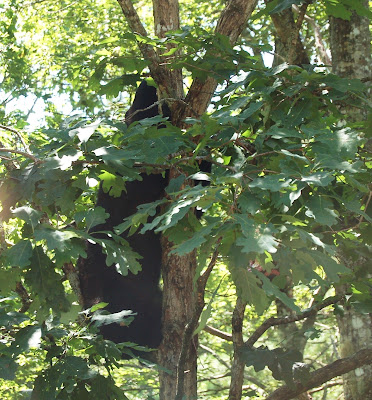 The bear continued his slow climb up the tree. 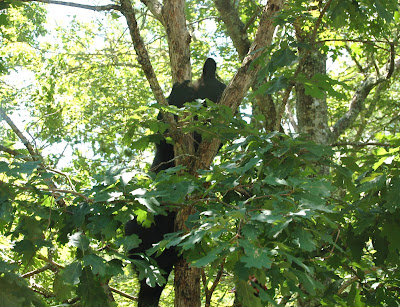 I told Lucy to "stay" and opened the deck door slightly.  I started banging the pans together, unsure of what the bear might do.  "PLEASE do not jump onto the deck," I thought.  To my great delight, the bear did not even glance my way.  Clearly terrified by the noise, it scampered quickly down the tree and ran as fast as he could down toward the creek.

Why would we have a bear wandering around in the middle of the day?  I suspect he was roaming since his mother had evicted him.  He likely followed our creek from the nearby lake it feeds into.  At some point he might have smelled our bird feeders.  Bears have an unbelievably keen sense of smell and perhaps the wind was just right to send the scent of the hummingbird nectar or suet to the bear down in the creek.  So perhaps he ambled up the hill and climbed the tree to get closer to the marvelous scents and perhaps even some food.

How fortunate for all of us that we were not only at home, but my husband was watching out the windows.  We are not terribly concerned about this particular bear returning.  In the first place he did not actually get anything to eat.  In the second place he was totally frightened by the noise so it seems this was his first encounter with humans and not a pleasant one at that.  He did not return at all and we have not seen him since.  He ran down the tree and out through the woods as fast as he could, never even glancing back.  And I watched until he was out of sight, and he was still running.  We have lived in this house for ten years and this is the first time we have had a bear climb a tree near the house.  We never leave any food out and we bring the birdfeeders inside at dusk.  So we are assuming this was an isolated incident, not to be repeated.  Interestingly enough, I had been sitting on the deck reading not ten minutes before the bear arrived.  I'm not at all sure what I might have done, but I now have a large metal spoon and pot on the table where I sit to read.

As for the update...all is well and there is absolutely no reason for my failure to blog.  Truth is, every time I think of doing a post, it feels like a chore.  So I decided to remain dark.  And will likely continue to do so for a couple more weeks.

Our lovely granddaughter is two months old now and growing like, well, like newborn babies do.  I'm heading up next week for several days of quality baby time.

Our county is bursting with excitement about the August solar eclipse.  Our house is within the center swath of the maximum darkness.  There are eclipse shirts, stickers, glasses, mugs, shot glasses and almost anything you can imagine.

We are having unseasonably hot weather.  It was 70 degrees last night when I took Lucy outside around nine.  And it was 70 when we got up this morning.  The air is still and it rains intermittently, just enough to increase the humidity even more.  YUCK!

I hope life is treating all of you well.  I am reading and following your blogs and will return at some point.  When it's fun again.

Be like Elizabeth Warren of whom McConnell said,
"Nevertheless, she persisted!"


Posted by NCmountainwoman at 1:54 PM 27 comments: