Mix Up the Nectar

Seems I took a longer break than I expected.  After our guests left both my husband and I got a dreadful GI virus.  The Norovirus that sometimes runs rampant through cruise ships.  Fortunately it is short-lived but such a nightmare.  When we recovered, I scrubbed everything thoroughly with bleach.

This is the last day of March and here in North Carolina we are getting ready to greet our smallest migrating birds, many of whom will spend the summer here with us.


This little one is sitting on a hummingbird that tops the feeder. 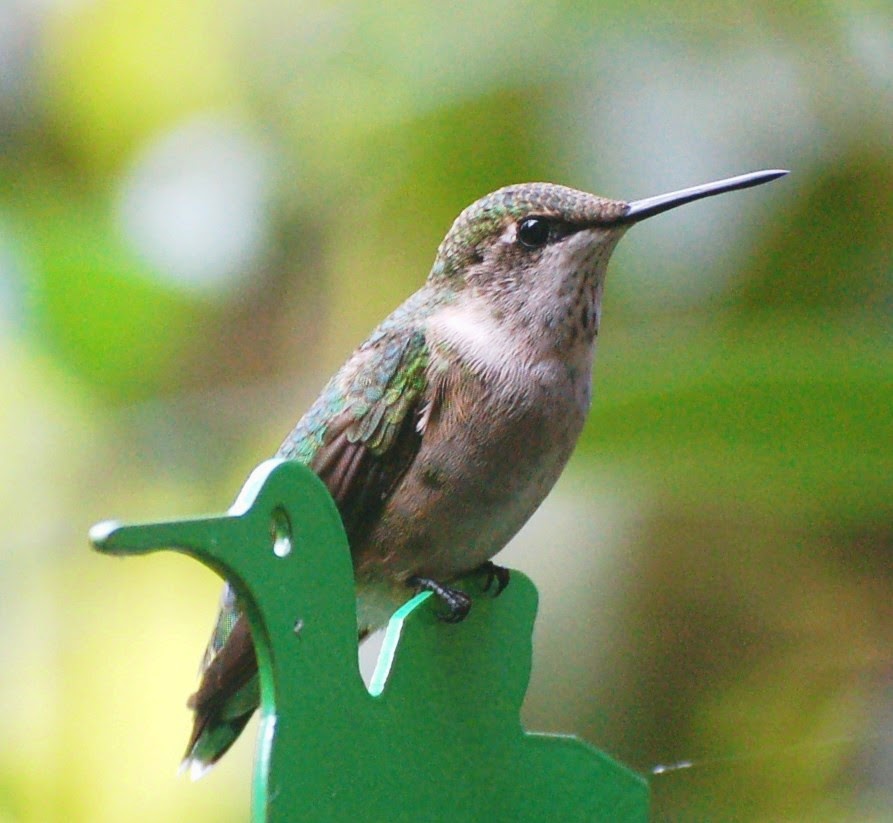 She looks at me as if declaring, "This is MY space, lady." 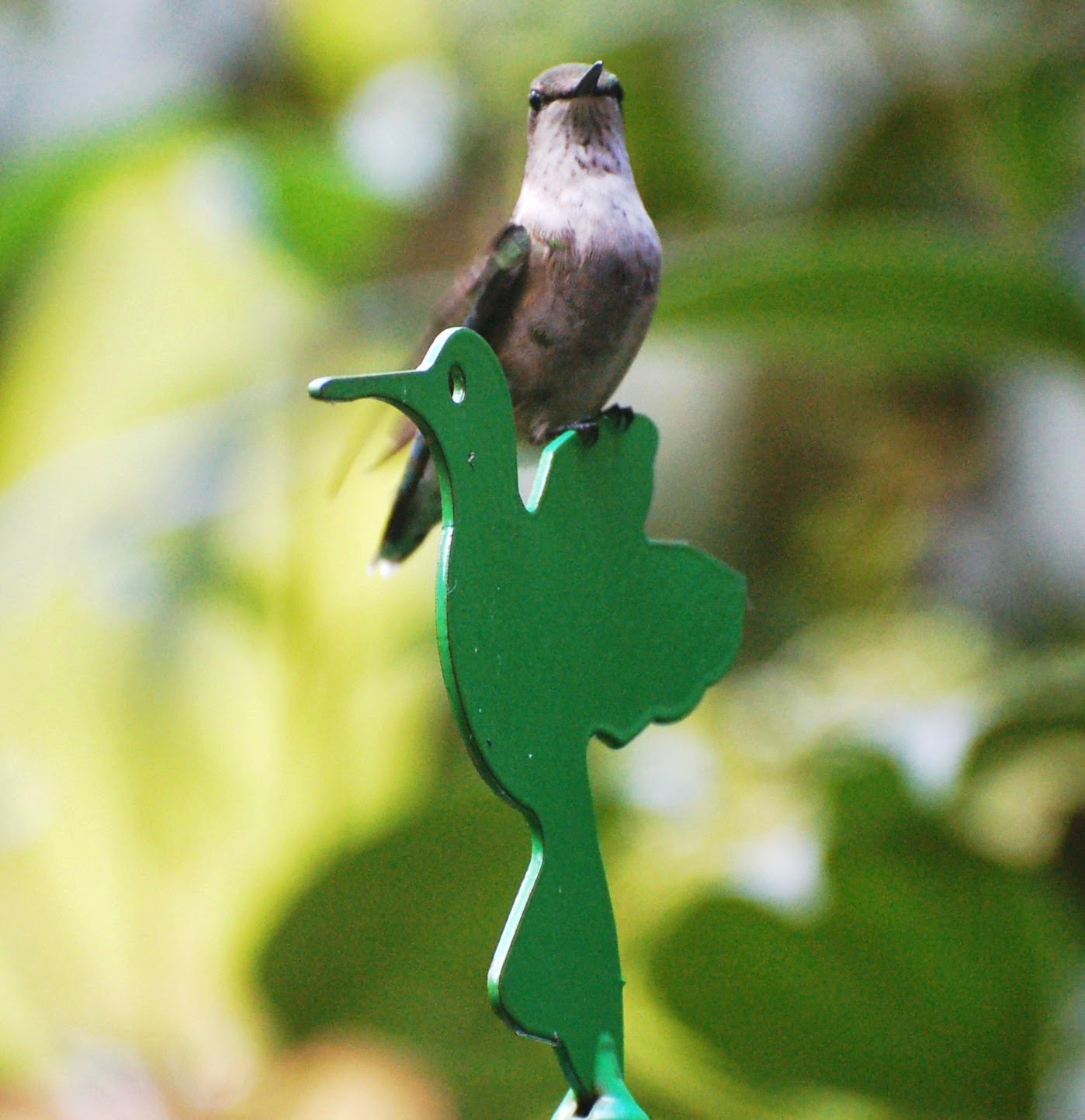 This is the migration map for today
(click to enlarge)

Each year the migration of the Ruby-throated Hummingbird is posted on the Web.  It is a device for self-reporting sightings of the birds and is typically very reliable.  You can find the map HERE

The map always bothers us a bit.  We prepare and hang the nectar and then wait and wait.  Hummingbirds are reported to our east and to our west.  To our south and to our north and yet we do not see them.  Perhaps it's because we live so near the Southern Blue Ridge Escarpment that dramatically rises above the piedmont areas.  Whatever the reason, the hummingbirds will come and we will welcome them for the summer.

I'm not certain why there are no migration maps for other hummingbirds.  Perhaps the Ruby-throated Hummingbird pathways are more predictable.


Posted by NCmountainwoman at 9:45 AM 13 comments:


Every year the White-breasted Nuthatches check out this nesting box.  So far they have never chosen to nest here but they often go inside.  The usual residents are either chickadees or titmice.  One year flying squirrels used it.  And to think...we bought it because we liked the way it looked. 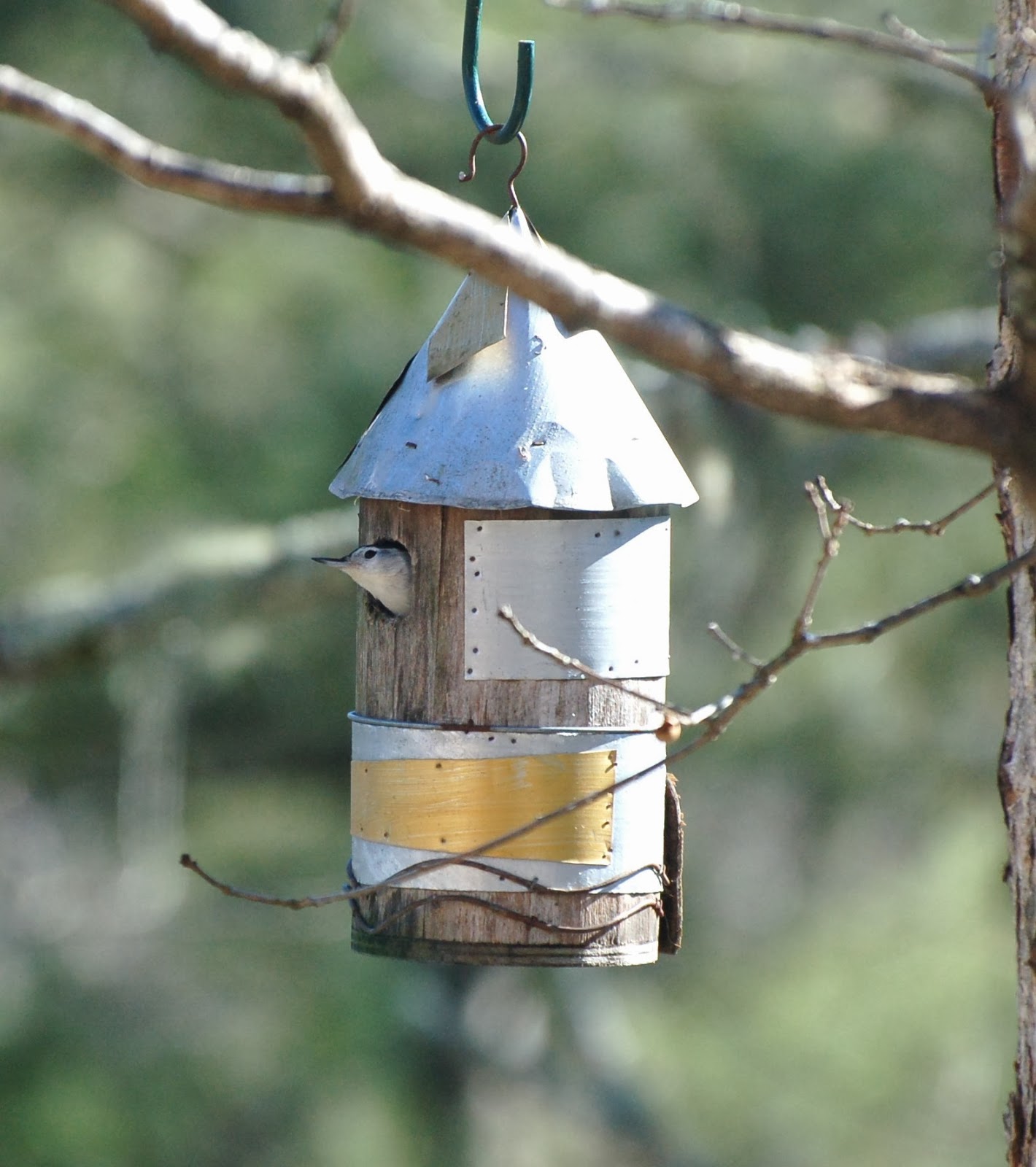 The hole is a bit too large for my liking 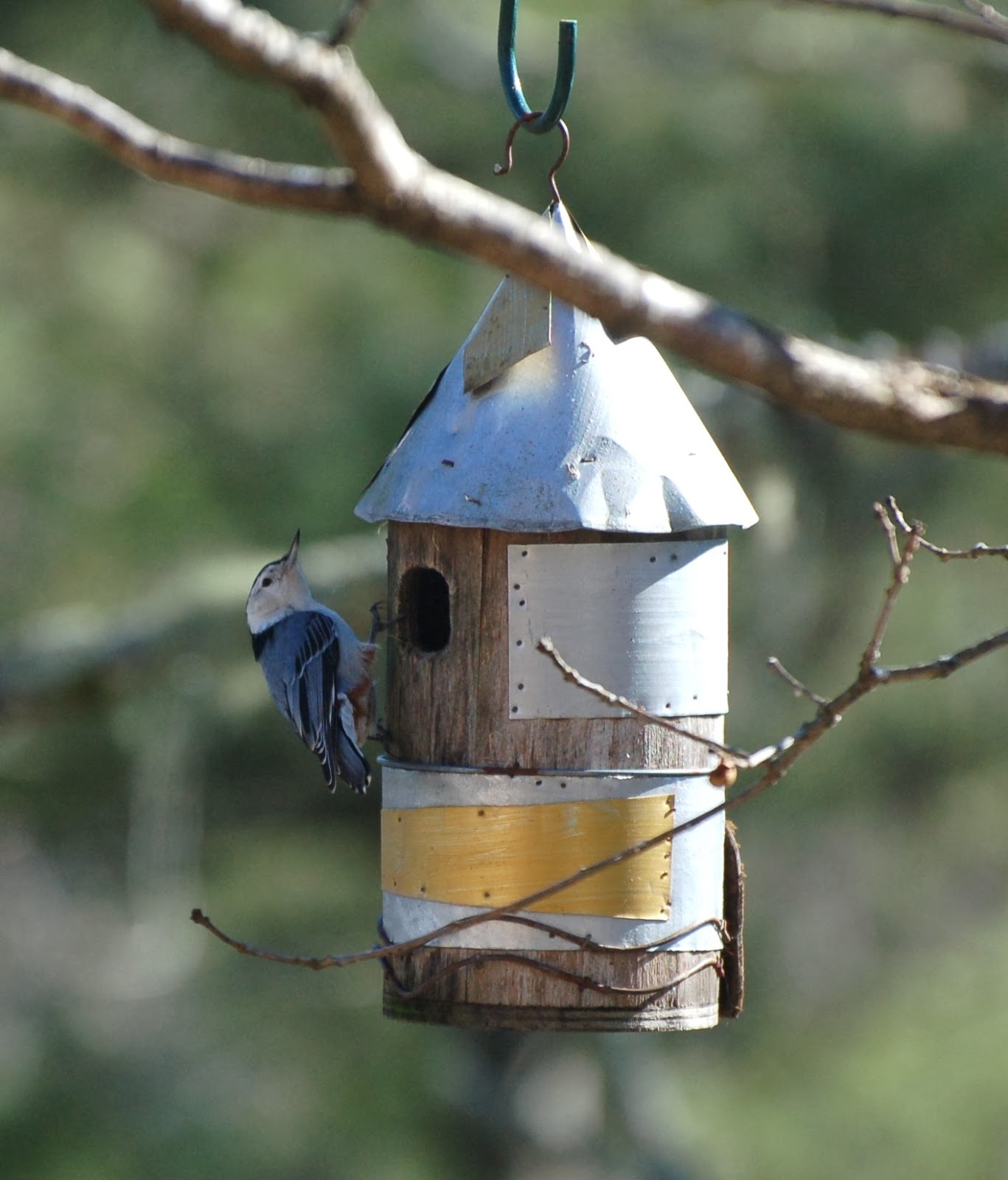 The birds may decide not to use this box because the flying squirrels enlarged the hole.  The smaller birds may feel vulnerable there.

I'm taking a blogging break for a week or so.  Company coming.  And the ACC Tournament.
Take care


Posted by NCmountainwoman at 4:29 PM 18 comments:

We have had several warm days and the very early spring plants are blossoming.  None are as lovely as last year due to the difficult winter they survived.  But we look forward to them all the same and enjoy them all the more.

Pieris japonica with its lovely flowers just outside the front door 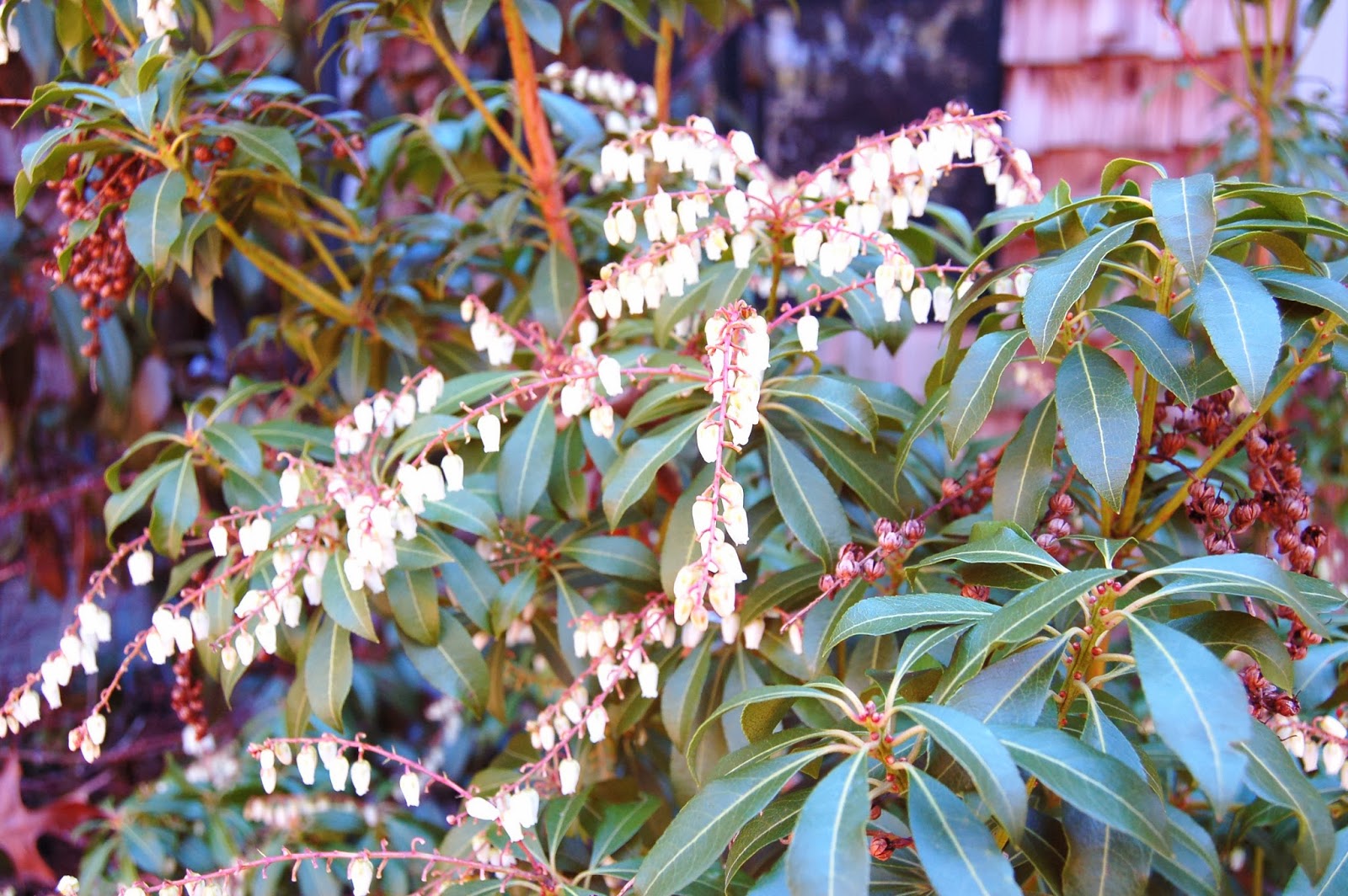 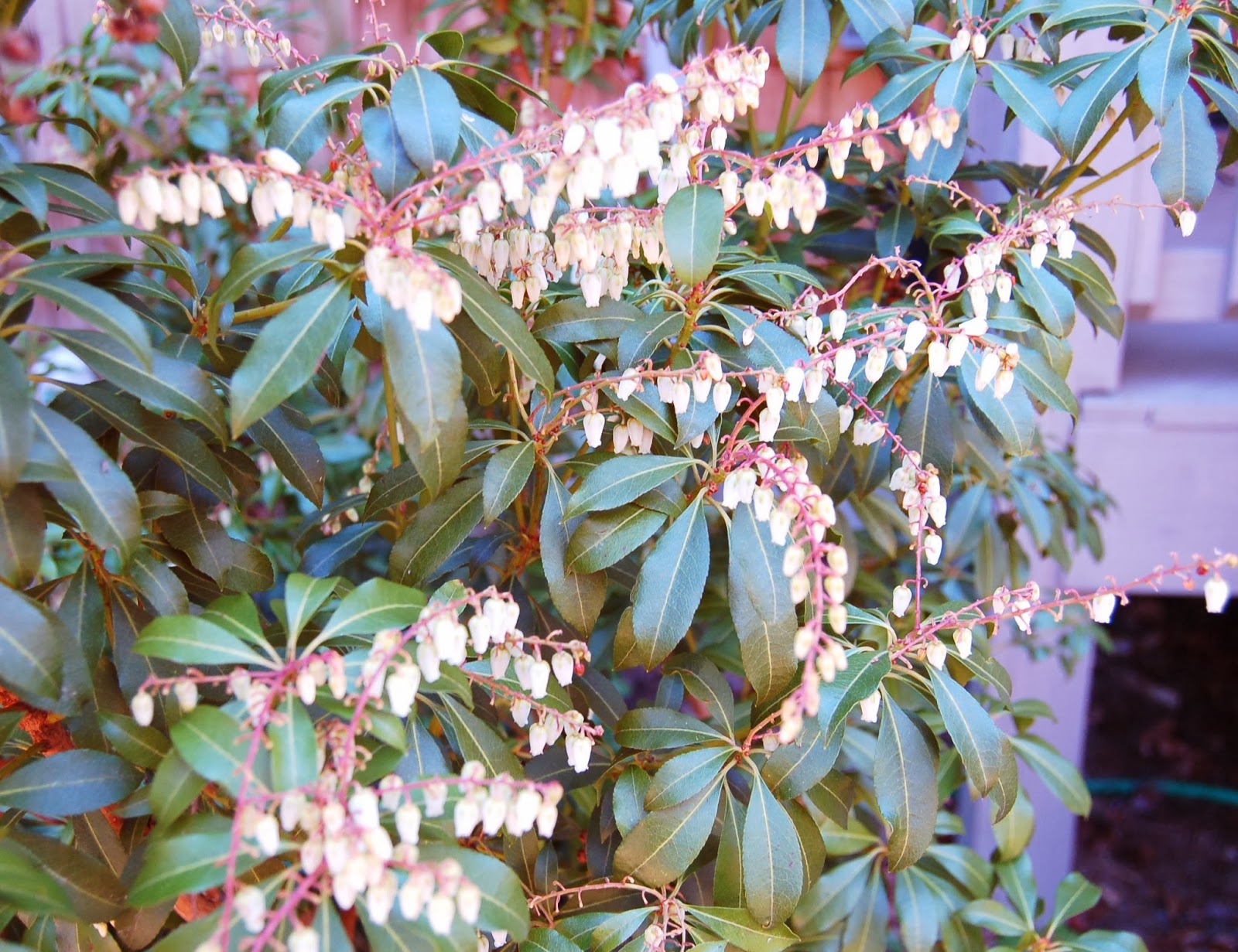 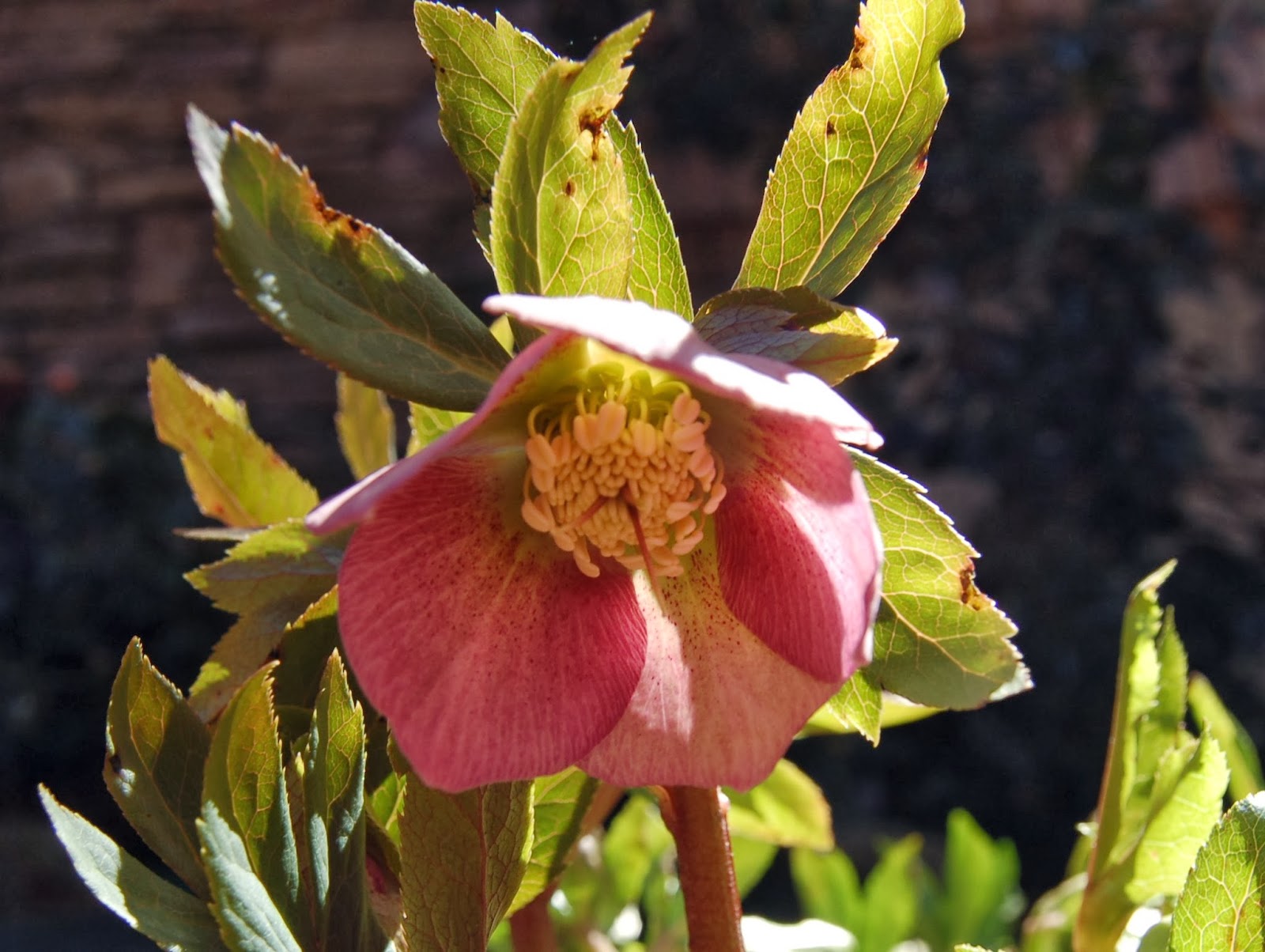 Arnold Promise flowers are dwindling but the sweet aroma continues.This sweet plant has been blooming since early January.
They held on despite the snows.  You really need one of these plants.
The plant itself will be lovely with leaves and gives a nice fall color.
But yellow fragrant blossoms in the dead of winter?  Priceless 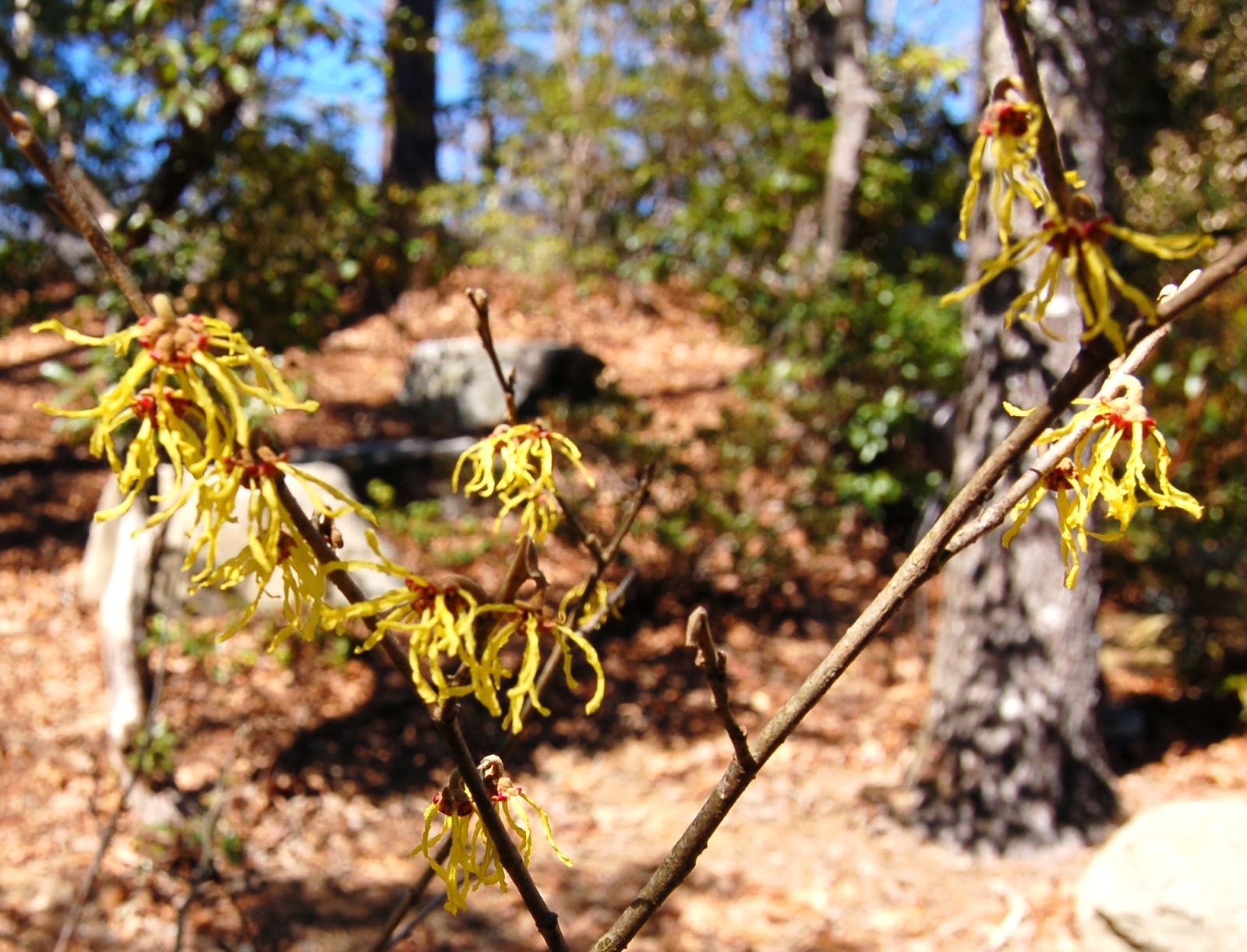 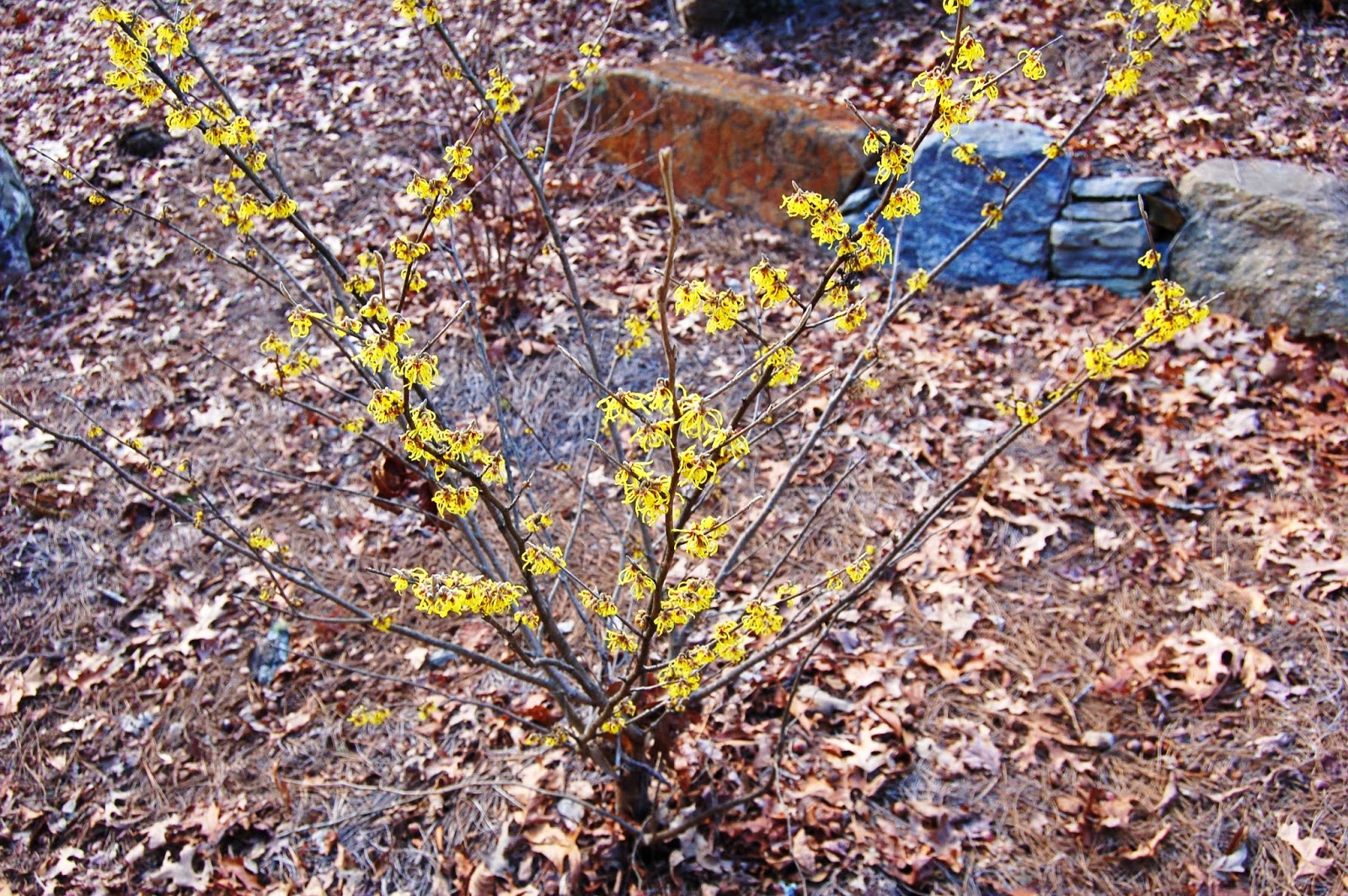 Another rather sad and weary bloom.
A camellia already browning upon opening.
Born a'dying as they say. 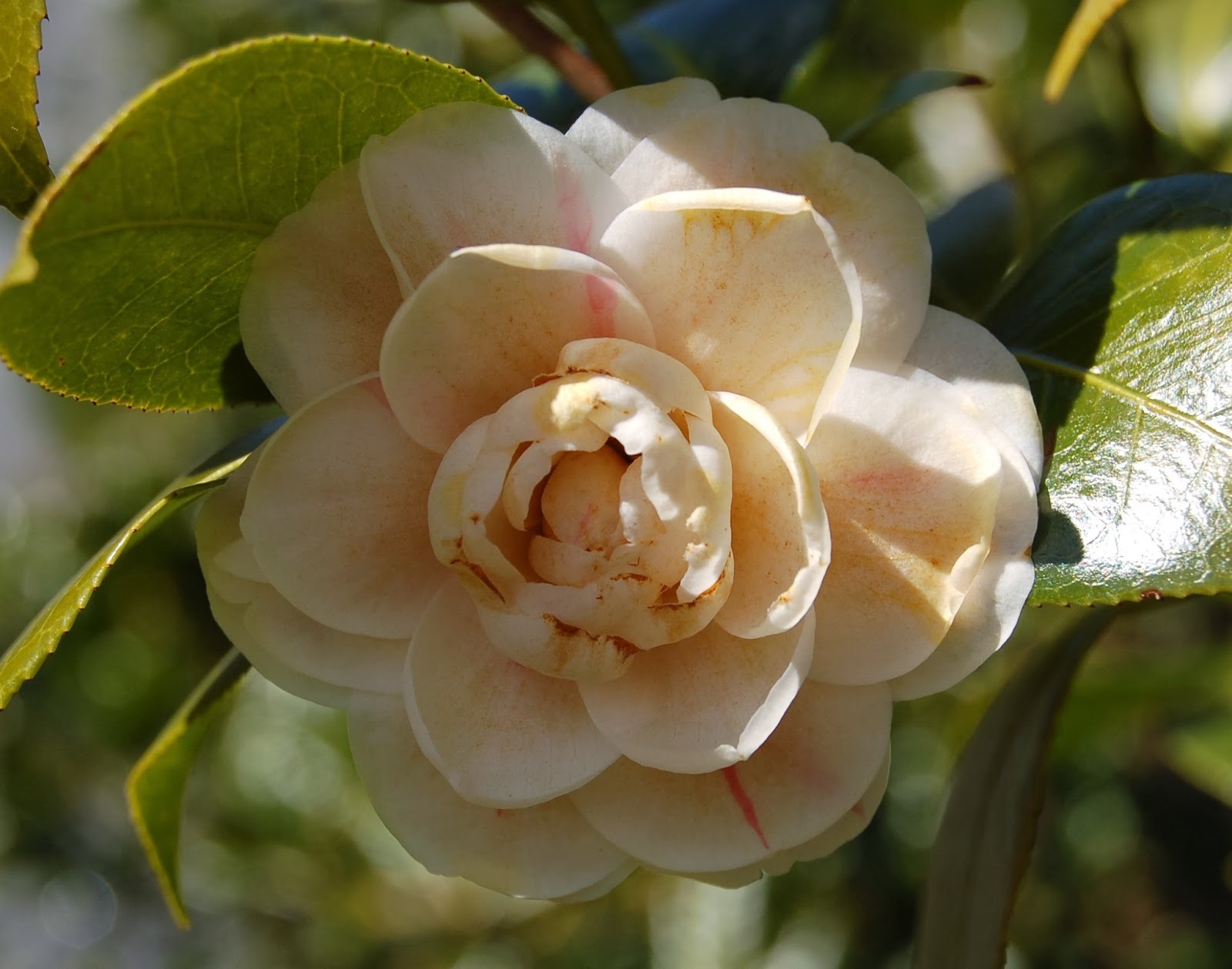 Every year I tell myself that I need to plant some spring bulbs and every year the time passes by.  I'm sure I would lose most of them to the deer, but I would love to have some crocus and daffodils.  Perhaps I'll remember come fall.

Posted by NCmountainwoman at 2:13 PM 9 comments:


Some of our neighbors seem surprised that Ellie and Lucy actually smiled.  Last week I posted a solemn Lucy but Lucy smiles as much as any dog I know.

Here are some of her lovely smiles.

On the deck in summer 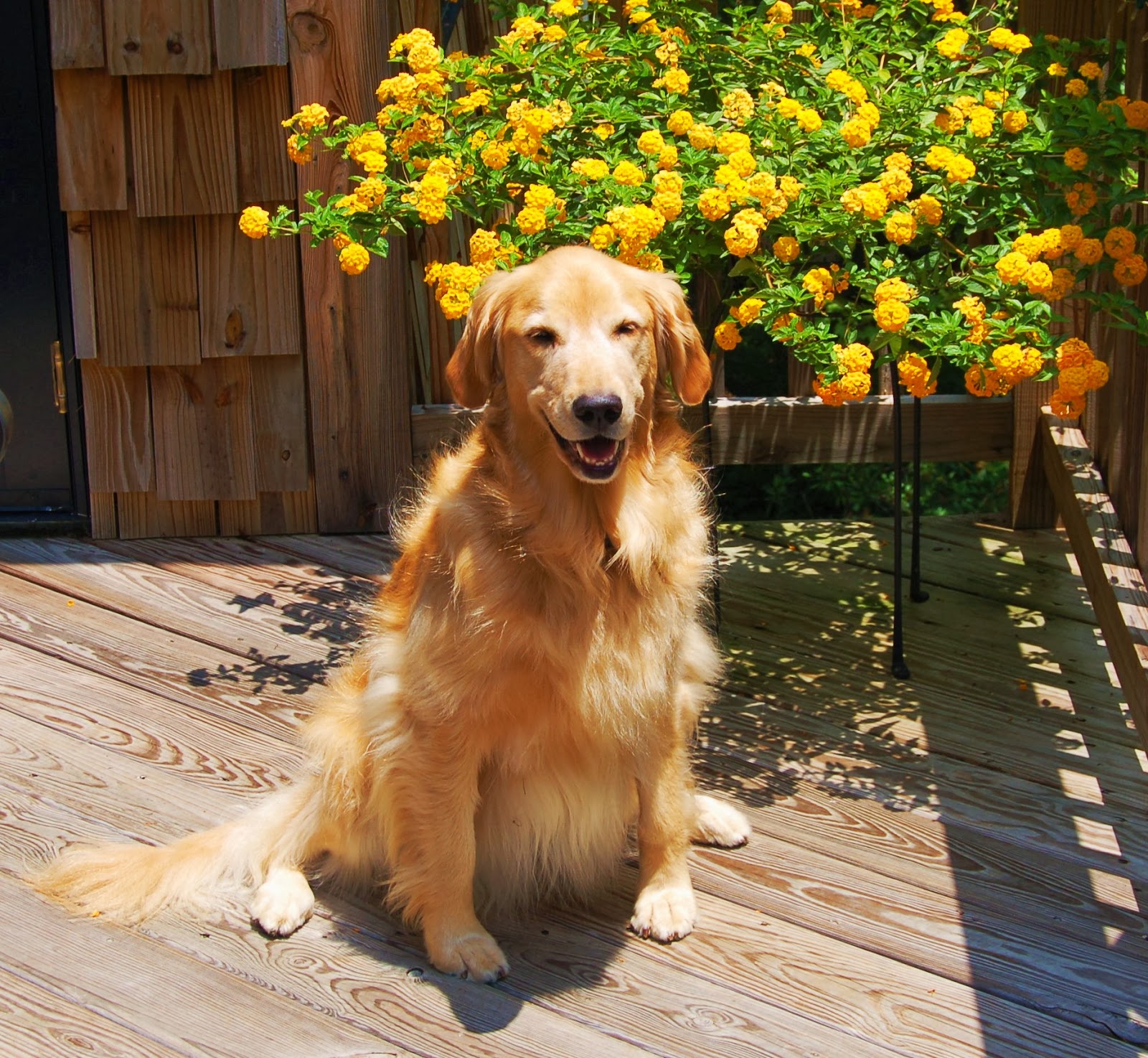 July in the yard 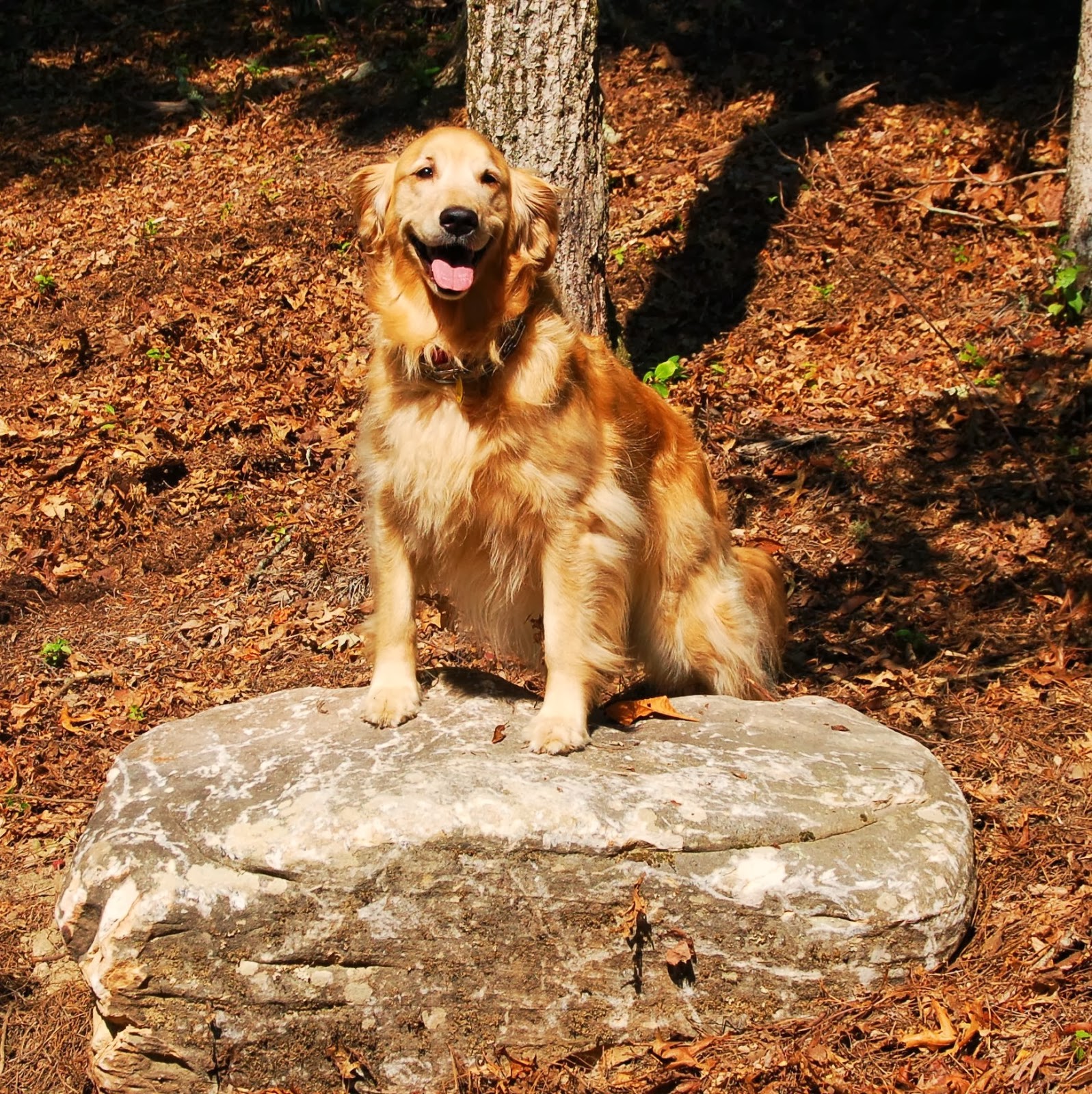 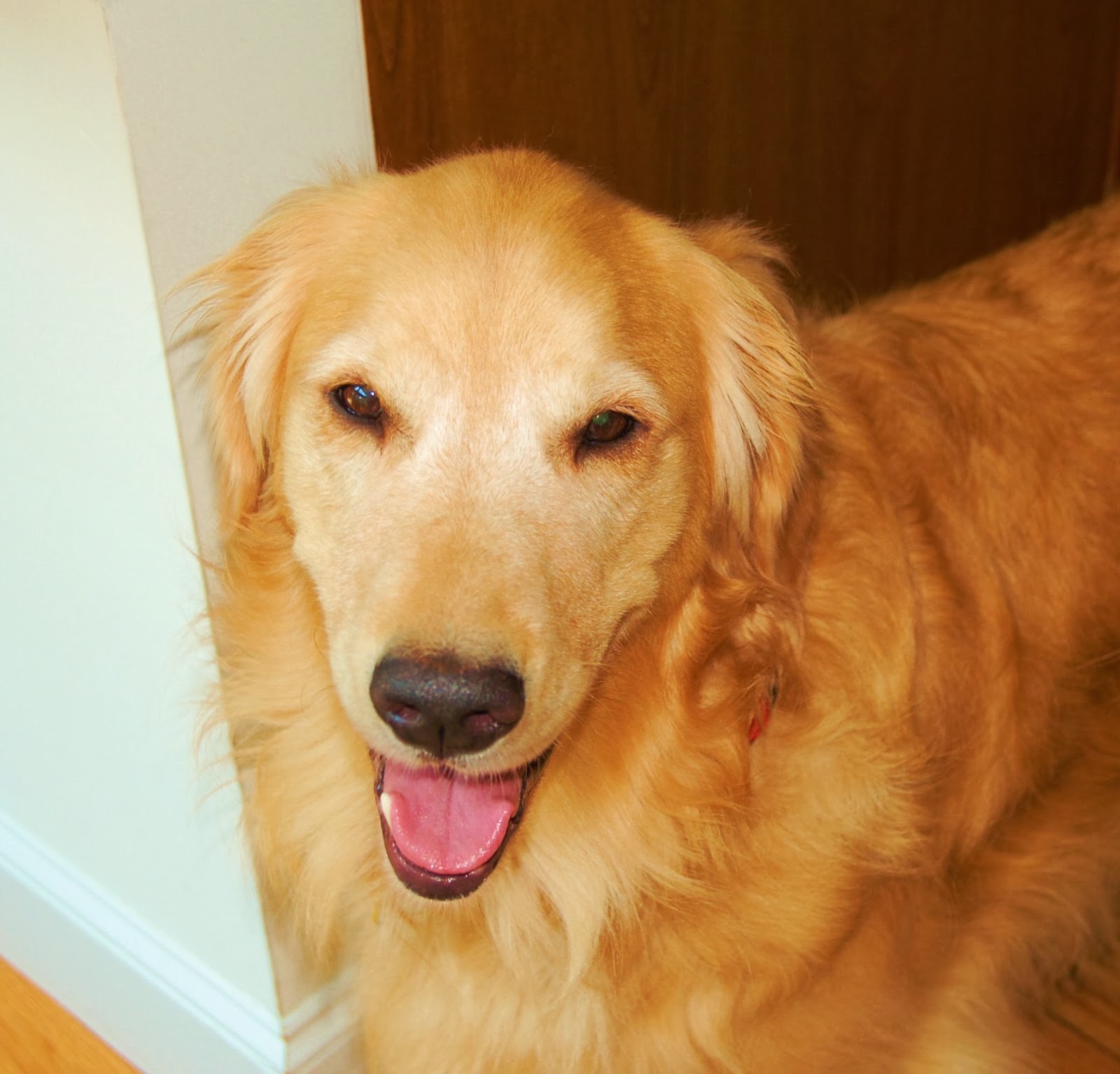 April in the yard 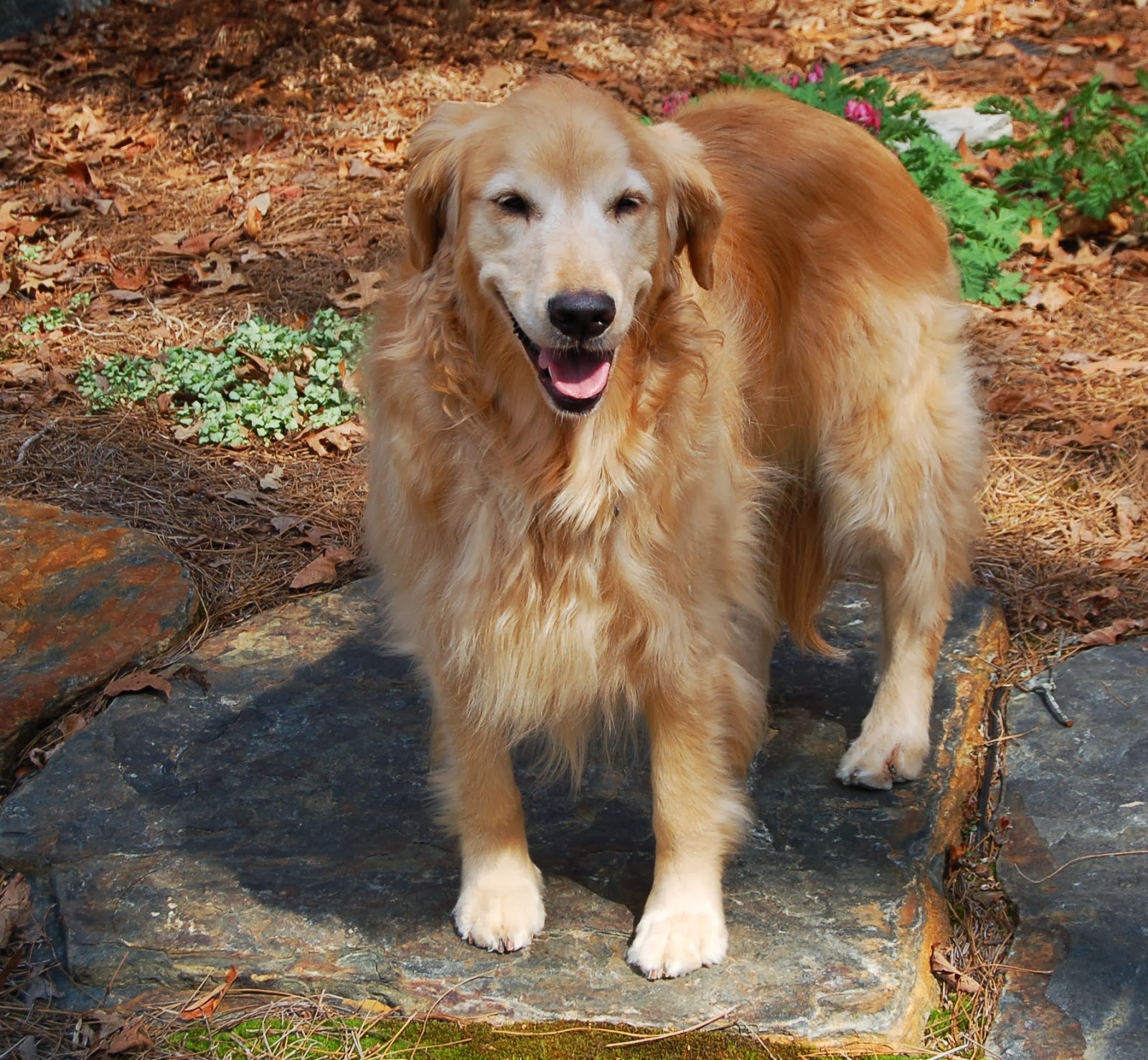 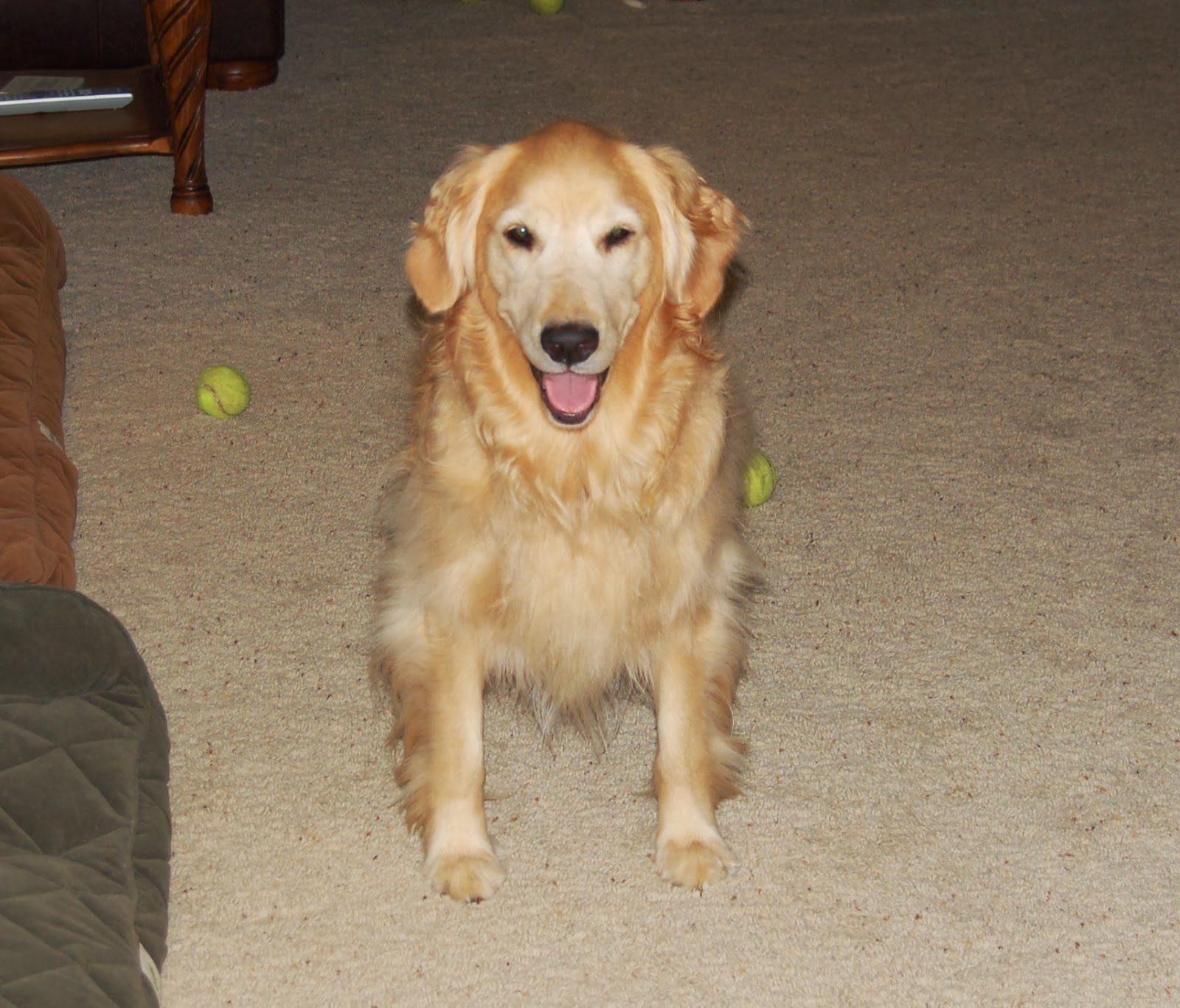 On one of our favorite trails 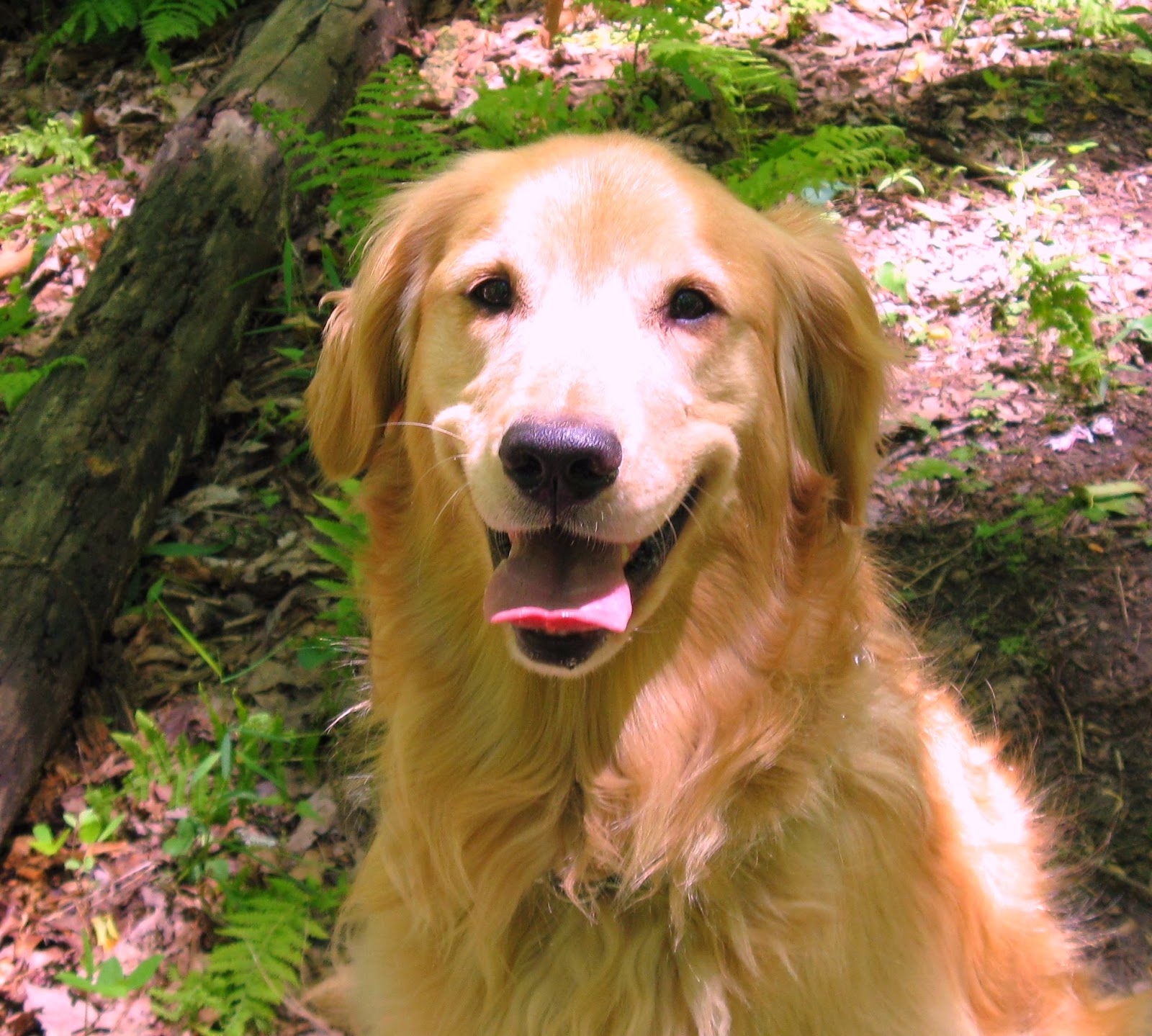 A smile is the light in the window of your face that tells people you're at home with yourself."


HAVE A SAFE AND WONDERFUL WEEKEND, EVERYONE!  IT'S AN HOUR LONGER THAN MOST.

Posted by NCmountainwoman at 11:44 AM 14 comments:

Our yard is planned so that there is something blooming almost all year round.  One of our favorite winter bloomers is mahonia japonica, also known as grape holly.  These shrubs start blooming in December and continue until March.  The yellow blossoms are a delight for the eyes and the sweet odor fills the yard.


Here is the mahonia last year 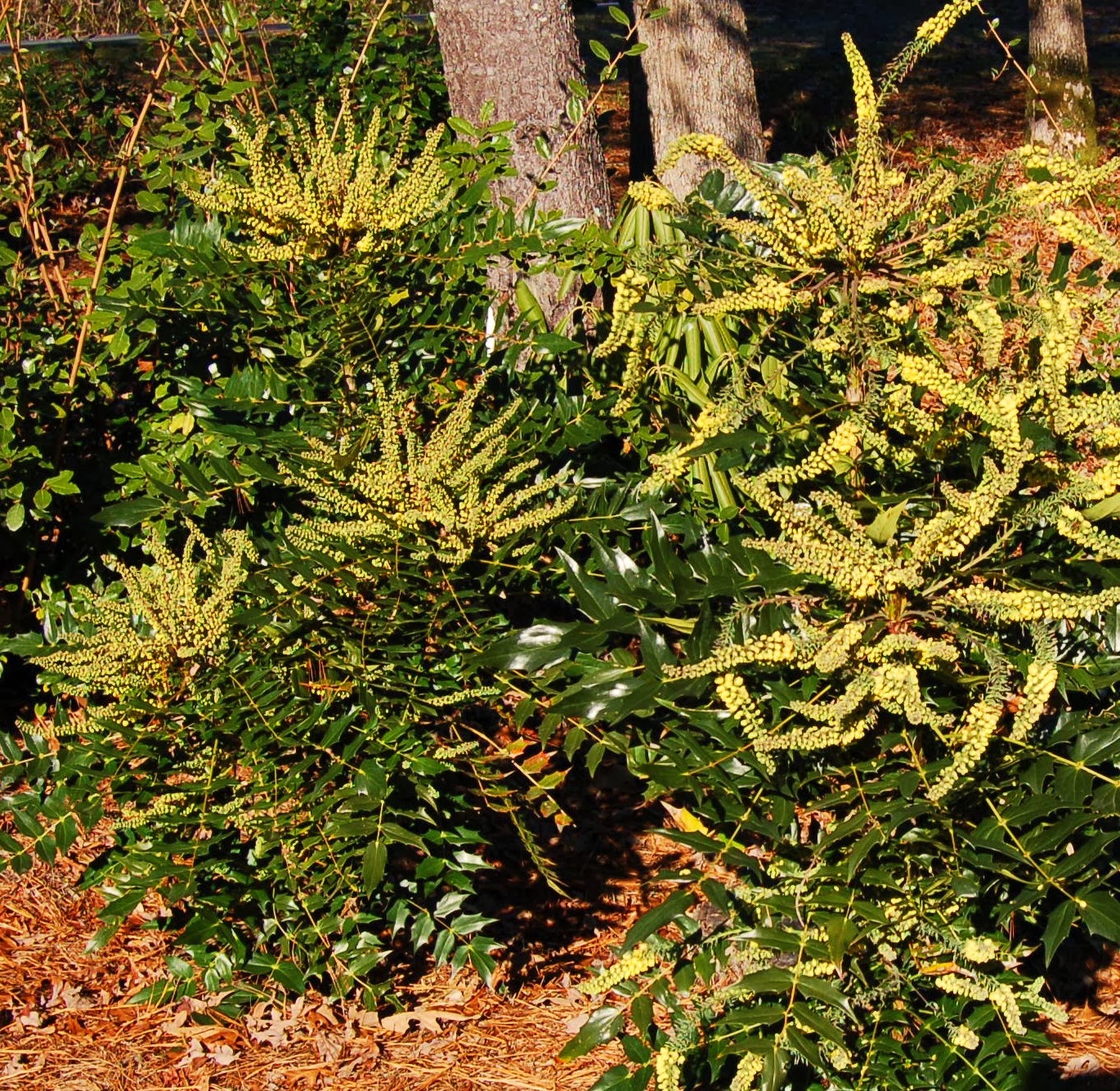 Fragrant blossoms that turn into clusters of berries 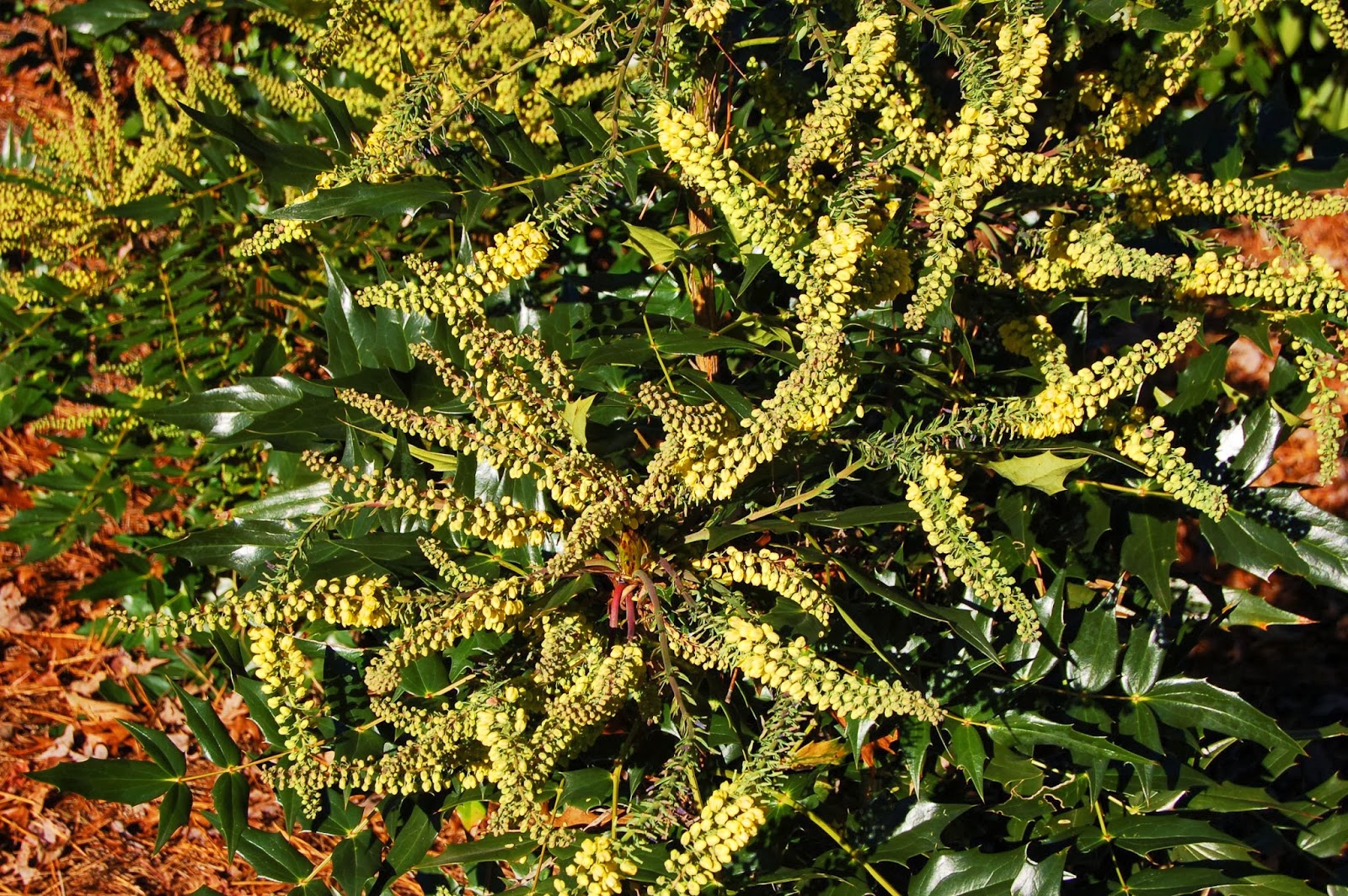 Unfortunately, this year's freezing weather did a lot of damage to these lovely plants.  They are very brown and we are uncertain whether or not they will survive. 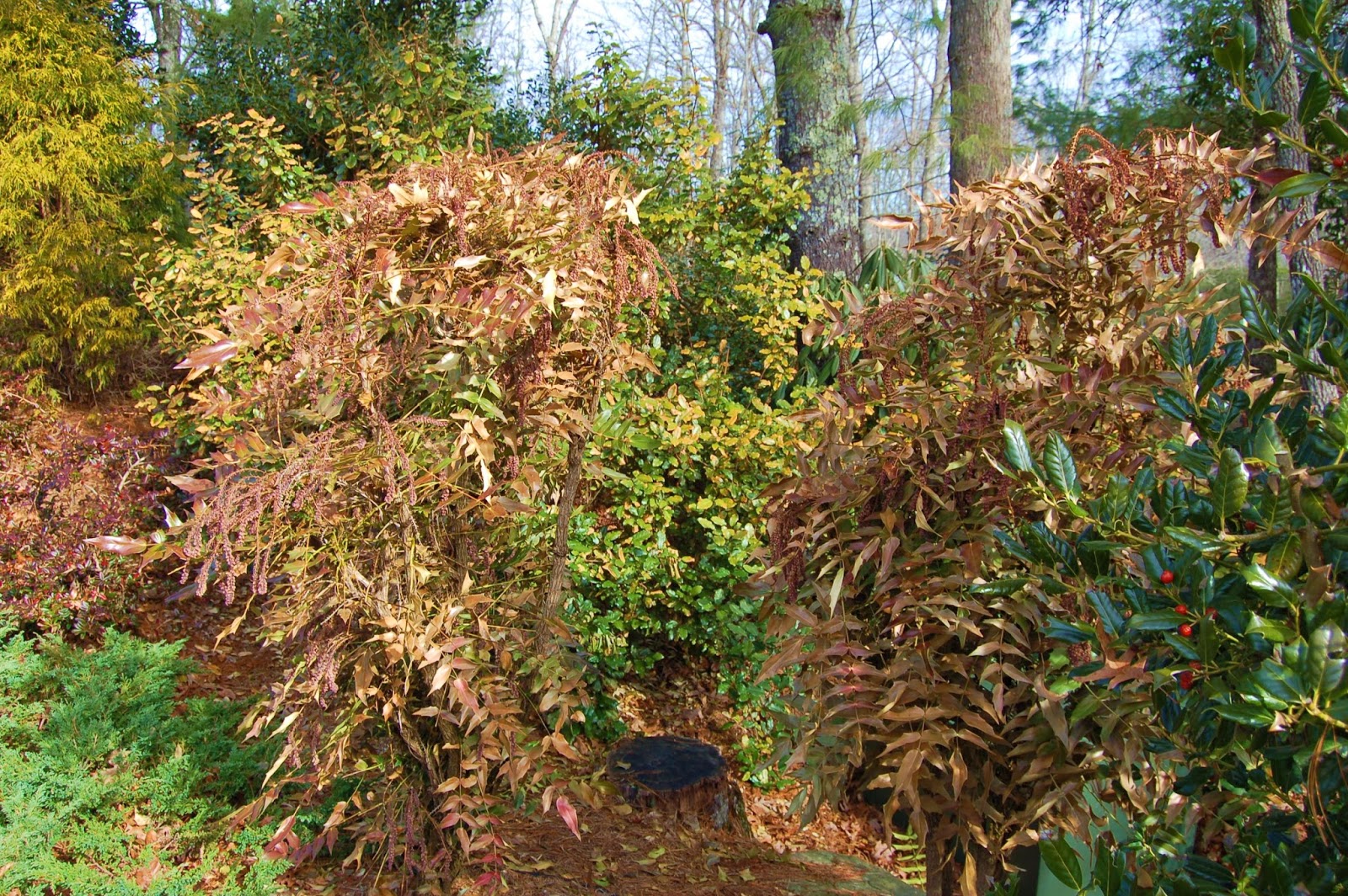 Dried up and sad 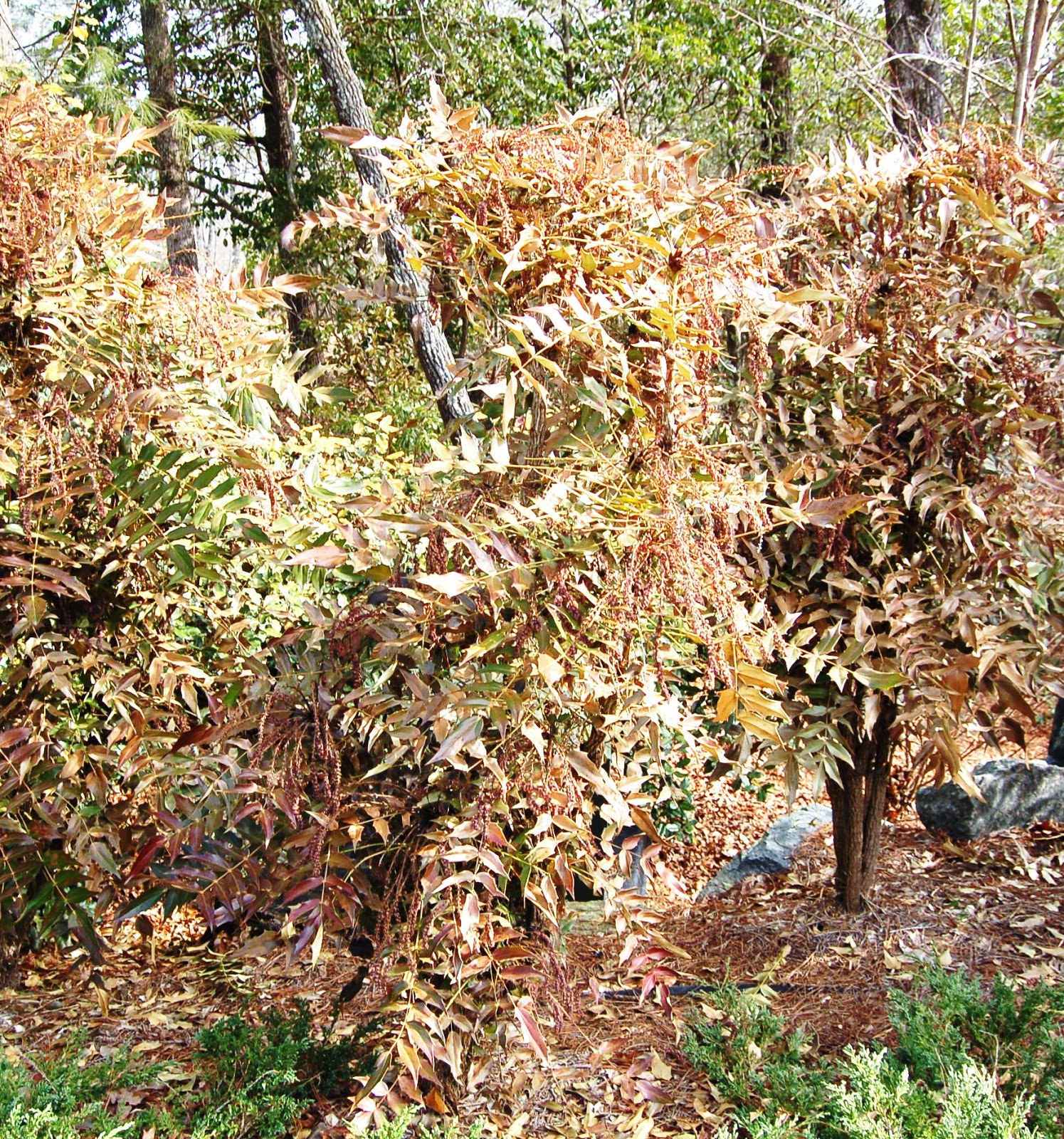 Time will tell how much of the plants are salvageable.  One thing for certain.  If we lose them we will definitely replace them.  The winter fragrance alone is worth the effort.  But I do so hate to lose one plant, much less three.

Posted by NCmountainwoman at 10:31 AM 9 comments:

I tend to be a seasonal reader.  Correct that...I read all the time, but the books I read vary with the seasons.  In summer I tend to read lighter books and I reserve the more serious or darker books for the colder winter days.  Somehow it seems strange to read a tragic story when during warm sunny summer days.  But serious books are perfect for reading by the fire cradling a hot drink or glass of wine.

In the Shadow of the Banyan is a wonderful historical fiction by Vaddey Ratner.  It is a first person account of the tragic takeover of Cambodia by the communist Khmer Rouge and the subsequent horrors that broke families apart and led to the deaths of two million people.  The people were driven from the cities.  Families were separated.  Anyone thought to be intellectual was killed.  Anyone who looked or walked or laughed like Viet Namese was killed.  The people were taken from the cities to rural areas where the Khmer Rouge hoped to establish a communist rural society.  People were moved around often to prohibit them from establishing relationships with one another.

In the words of the author, the Khmer Rouge told the people, "To keep you is no gain, to destroy you is no loss."  And destroy them they did.  Families, including young children were put to work in the fields from sunrise to set.  They were starved, tortured, and executed.  When they died their families were not permitted to properly bury them.  They were placed in the fields as fertilizer.  During the four years of the "killing fields" more than a third of the Cambodia population were killed. 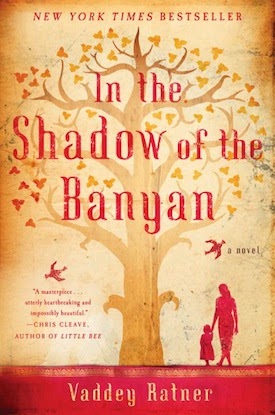 This story is all the more moving and powerful because the author actually lived through the turmoil.  She was only five years old when her family was uprooted from their home and forced to become laborers.  The author decided to write the book as historical fiction rather than a memoir because she was so young and her memories incomplete.  The narrator of the fictional version is seven.   Her father was taken away and throughout the book, memories of him with his stories and poems give some solace to the little girl.

In the Shadow of the Banyan is an intriguing read.  Cambodian legends and fables are woven into the story as is the poetry of the author's father.  This book will definitely encourage you to refresh your own memories of that time.  Or if you don't remember the time, you will want to do a bit of research on the horrific war.  Unfortunately actions by the US Government prior to and during the conflict contributed to the Khmer Rouge's ability to take over the country for four years.  What a tragic waste.

Posted by NCmountainwoman at 2:43 PM 11 comments: