Our Ellie frequently walks around with two tennis balls in her mouth.  Lucy tries and tries to grab two of them at once.  She is never able to manage it.  Her head and mouth just aren't suited for carrying two tennis balls at once.  But that doesn't stop her from trying.

Ellie came upstairs with two balls and Lucy took them.  I could tell from the expression on her face that she was going to try once again so I grabbed the camera. 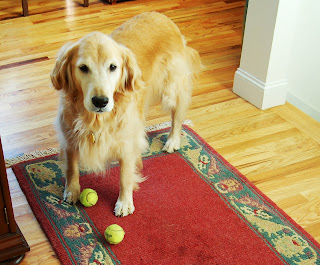 Lucy gets one of the balls in her mouth without much difficulty.﻿
OK  I got one of them.  Now for the other one. 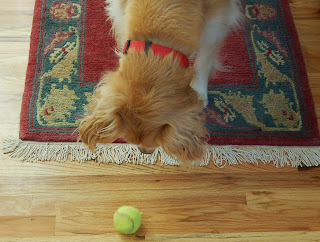 This is the tricky one but I think I can do it. 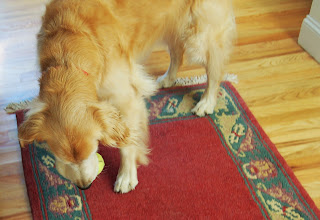 Take the picture quickly, Mom.  I'm already about to drop one of them!  Hurry! 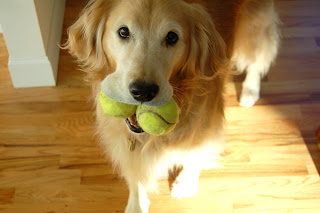 As soon as I took the photograph, Lucy dropped one of the balls.  She held the two of them for no longer than 10 seconds.  But by golly, she did indeed hold two at one time.﻿
That wasn't too bad, Lucy.  But you really need to work on your form.  The balls should be held so that both of them are centered.  Like this!
﻿ 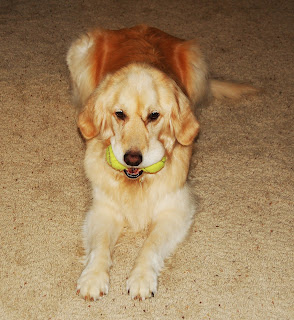 Here we are near the end of October.  Sixty-four days remain in 2011 and then it will be gone.  But there is a lot of fun to be had before then.
We love Halloween around our house and we have plenty of tacky decorations.  One of my favorites is a fiber-optic scarecrow.  We've had it for years and each October we wonder if the filaments will light up for another year.  So far so good.
﻿ 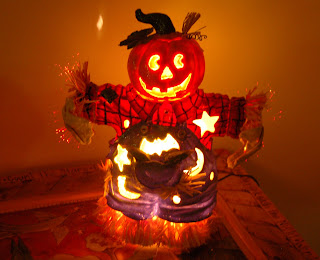 From ghoulies and ghosties and long leggety beasties and things that go bump in the night,
GOOD LORD DELIVER US!!!
HAVE A WONDERFUL WEEKEND, EVERYONE!!!﻿
Posted by NCmountainwoman at 10:14 AM

My Fridays are golden too when I visit your post! THANKS!!

My hubbies golden retriever Bernie must hold the record.

I remember s day one of the fellas who picked up the trash called to his co worker..he said look this.

He proceeded to throw tennis balls to Bernie the dog...one at a time..until ~ Bernie held all five

We of course, knew of Bernie's talents..it was fun to see someone else enjoy them.

Fun, fun, fun.....smiling from ear to ear. Love you Ellie and Lucy.
You charm me every Friday.

I have the Grand-children visiting for Halloween. There is something scary lurking in the Tree House :0)

We're proud of you, Lucy! You are so cute! Ellie, you are so, so beautiful and talented :-) We love Halloween, too. I think The Bug has pics of some of our decorations for this week's Project 365. Happy Halloween!

Dear friend...thank you! I do play the Appalachian dulcimer. Not a lute, but...

MOL that is abolutely amazing!! How in the world doe s she get the 2nd one in? Next she needs to work on whistling Dixie while holding two tennis balls in her mouth. Your Golden girls must give you hours of golden smiles.
Must be cool up your way as it is coooool here. 30 degrees cooler than yesterday.
Hugs Madi and Mom

PS
Your Halloween decor is purrfect.

That gave me a big grin! Thank you, I need all the help I can get.

LOL - what an accomplishment! I love that she keeps trying.

woo wooof! Way to go Lucy! It took me most of my life to hold 2 balls and one bone. Keep at it girl soon you'll be runnin' with them in your mouth.
Blessings,
Goose

Poor Lucy...I give her an A+ for effort. :)
I love your tacky scarecrow too.
Have a great weekend!

What a sweet dog,I love your Halloween decorations. I haven't put any out .. Hope you have a lot of treak or treaters and a Happy Halloween.

Lucy Lucy Lucy...YOu have my greatest respect. I honor you for this feat as I am unable to even play with tennis balls, let alone hold two in my mouth. YOu are not only beautiful, but you are talented too.
will you thank your human for me for the sugggestions of Pure touch. We are gonna order some tonight and try it.

Our Golden can only hold 2, but he can do it with ease :-) Way cute pictures!

Ellie is the Olympian of tennis balls! (Lucy is trying hard, though...) I cannot believe the year is winding down so quickly. We get NO Halloweeners at our mountain house. (They have the festivities in town.) (That means no leftover candy for ME!

That was a very funny sequence about Lucy and Ellie, and two balls in their mouths!!!!

I enjoyed your previous post as well... amazing colors - such a mixture from red to yellow. And, I loved your husband's funny reply to the neighbor :)

Practice makes perfect, Lucy. I give you an A for heart and effort.

It's amazing that you actually were able to get Lucy's big double tennis ball feat on film. Very sweet.

Happy Halloween to you! Lucy and Ellie are a treat each week.

Dawn - Wow! I have seen Ellie carry three but I don't think she would ever manage five.

Cheryl - What fun to have a haunted tree house! And grandchildren to play with.

Goose - After all these years, I suspect a few seconds is the best Lucy will be able to do.

Bert - You are going to enjoy Pure Pearl and Pure Touch. You are already so handsome!

Good or Lucy. Ten seconds is better than none! Mingus would LOVE to get both his and Kaylee's ball in his mouth at the same time but he just can't. The balls are just too big and his mouth too small.

Oh dear, the fireworks are starting up and so is Mingus!