I was cleaning up some of my photographs, deleting some and transferring others to a back-up hard drive.  I realized that we have been treated to some rather unusual animals and birds right here at the house.  You may have seen some of these before.

A white version of the gray squirrel (not albino) is seen fairly often in downtown Brevard.  They breed with the gray squirrels and now make up about a third of the squirrels in the downtown area.  It is very rare to see them more than nine miles away from town, but we had a visit from one.  (I still maintain they are beadie-eyed little monsters.) 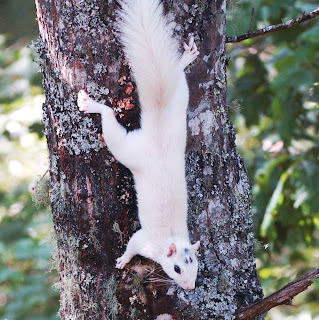 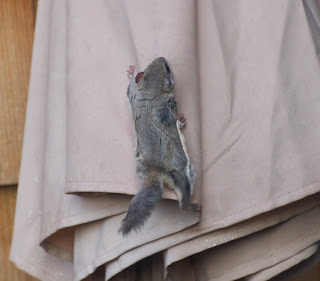 The Black-throated Blue Warbler is occasionally found at higher elevations in the NC mountains.  They are a rare sight in our county.

Black-throated Blue Warbler  Note the "pocket hankerchief" on his wing.﻿ 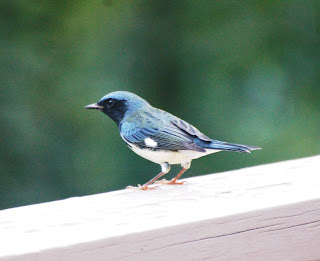 The Worm-eating Warbler is not a common sight around here and certainly not often observed on a deck. 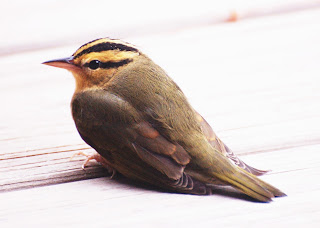 The Black-and-white Warbler is a summer guest in our mountains.  But they usually stay out of sight in damp woodlands.  This one was creeping up and down the screen outside the kitchen window.  At first I thought the bird was caught in the screen, so I grabbed a glove intending to help him get loose.  When I opened the door, the bird flew away with ease. 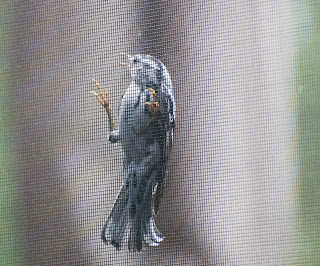 Purple Finches are common around our house in spring.  This bird is a leucistic female.  She is much lighter in color than a typical Purple Finch.  We were pleased to see her being fed by a lovely male Purple Finch so it appears she may be attractive despite her strange coloring. 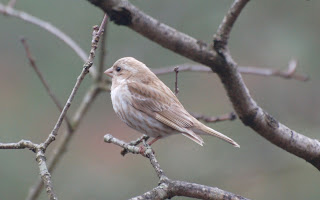 Very early one morning my husband called me from the garage.  A bobcat was walking down our driveway!  I grabbed the camera as he moved from our driveway to the woods beside the house.  What a thrilling sight.  We had seen evidence of bobcats in the area, but we had never seen the lovely feline until this one morning.  We have not seen one since although they are still around.﻿ 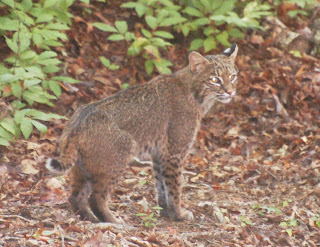 We see evidence of visitors in our woods all the time.  Many mornings we can still smell the skunks who drifted by.  We have seen the place where a black bear had dug out a yellow jacket nest at the foot of a tree stump.  We have a three-legged coyote that we see fairly often.  We've had a 'possum in our garage.  We see raccoons almost daily.  And the deer have a trail in our backyard giving them easy access to our plants.
Living here is such a treat!﻿
Posted by NCmountainwoman at 2:44 PM

great photos of your creatures! Reminds me of the woods around Robin and Roger's house, filled with critters that are just going about their business and we get to watch.

How are the fall colors in your area?

We live in a very squirrel free environment (although for some odd reason I saw a raccoon on the freeway the other day...) so I think I would like to see more of them!

Love all the photos! I've never seen a white squirrel before. And we used to have flying squirrels in our attic-it took forever-and almost removing the roof to get the little devils to leave : )

Isn't it neat to live in the 'woods'??? Our area is similar --but we don't have some of those gorgeous birds you have, or the white squirrels. What a treat!!!!!

Hope you two are doing well. We've been traveling again (so what else is new!!!) ha
Hugs,
Betsy

Wish I'd jumped on the purchase of a home in your area back in '07 when we were making the rounds with a realtor.

Here in the coastal Low Country, we have the Southern Fox Squirrel, which are big, bold, and clownish. I'm very fond of them. Next time I'm up your way for a cabin weekend, I'm going to keep my eyes peeled for your white ones. How cool!

Myt Vickie just loved the pictures of all your critters. She is a bird and animal enthusiast. (I guess that is what you would call her, I kinda call her NUTS)

Wonderful pictures!!!!!!!
We see wild life here everyday too when Bambi was here b/c she never barked or chased them. But when Tinker was here she was hell bent on catching one so didn't see any. Today I saw some coons but headed seen any for weeks.

Great photos! We have plenty of squirrels, but not white ones. Other than abundant squirrels, the majority of the wildlife I see, is in the form of skunks and possums. (unless you count stray cats)

Wow, I live in the woods, but I must spend too much time looking at the computer screen. Wow.

I'm happy to say that we haven't seen any signs of flying squirrels around here -- we have enough trouble with the regular variety. I had hoped that white squirrels were a little less into thievery, but I gather they are not. You certainly have many interesting visitors at your place.

Wow--you do have quite an array of fauna. I love the white squirrel--though, I suspect, its behavior is exactly like any other color squirrel.
How do your dogs react to all the wildlife?

I know I am crazy, but the white beadie-eyed little monsters are kinda cute. I am sure they are a pain too.
THe bobcat is gorgeous.....oh, love seeing them.
A three legged coyote?? I bet that little guy has a story or two to tell!
You do live in a wonderful part of our country. Enjoy.

I would be a nervous wreck with all those critters when I take my dogs outside.

What a wonderful habitat for wildlife.
The Bobcat is beautiful. I love wild cats. The only wild cats we get here are in Scotland......
Although there is a Panther living in our area, escappee. It has done so for several years. I thought it was just a story that had got out of hand. It isn't, I saw it around three years ago. I was walking Nella at the time. Believe me I got home quickly that day!!

So cool! We get quite a bit of wildlife in our canyon just above the city. More than you would expect.

Saw an article in our local paper that we have coyotes in the city here. If you want to come take a photo, I'll go with you... as long as I can wait in the car.

Wow! Such beautiful sightings you have there. You know how I feel about bobcats. If I had a totem animal, that would be it. Love them!

Wow! You really do have fascinating animals right at home.

I was struck by how different the coat on your bobcat is than on the bobcats around here.

And, a three-legged coyote. It's really impressive that he survived losing a leg - and now continues to survive. Wow!

Taradharma - The leaves are at or near peak in elevations above 4,000 feet. There is some color at almost any elevation. Unfortunately, we are having rain and wind and that will surely knock off a lot of the leaves.

Sam - There is no hunting in our large community and the squirrels seem to know it's a good place for them. We have tons of them.

Tipper - Those flying squirrels can really make a mess if they take up residence. We have heard some real horror stories about them. They nested in one of our roof vents but thank goodness they couldn't get inside.

Betsy - Yes, we do love living in the woods. But we have to be very cautious if one of the dogs needs to go out after dark.

Nance - The housing market is still very depressed here and there are lots of bargains to be found. If you are in Brevard, the college campus is a good bet to see white squirrels.

Bert - We are all nuts around here so your Vickie would fit in just fine.

Fern - Our dogs pretty much ignore everything except for squirrels on the deck. If they see one, they want to run out on the deck to chase them away. Funny though, they don't want to give chase if we encounter them on our walks.

Ms. A - We have a very active security detail and they remove feral cats so we don't see any around here.

PS - I spend a lot of time sitting on the porch or deck and watching.

George - The white squirrels are a variant of the common gray squirrels and are just as pesky.

Donna - The dogs do notice the wildlife but they see them so often when they are on lead they don't really chase after them. Lucy once chased a turkey and we were so afraid the canopy of trees would prevent it from taking flight. Fortunately, we called her back and the turkey flew away. I have no idea what might have happened had she actually caught it. Lucy is also very distracted by crows on the ground and I'm sure she would go after them if we let her.

Suz - It is unusual for a three-legged animal to manage to survive. This one looks quite healthy other than the loss of the leg.

Peruby - We have not had any daytime encounters, but we would not venture far from the house after dark. I am always on the lookout for animals with strange behavior since rabies is quite prevalent around here.

Cheryl - We also love the bobcats. There are panthers around here, but I have not heard any reports of anyone seeing them.

Canyon - I am always surprised at wildlife encounters so near the urban areas. Every now and then a black bear will wander into the streets of our town.

Merrily - When we lived in suburban Milwaukee lots of little dogs were snatched by coyotes. And the bunny population really went down after the coyotes moved in.

Robin - I also love the wild cats of all kind. Such beautiful animals and skilled hunters.

KB - We first saw the three-legged coyote in 2006 and we have seen him this year so he must be doing well. He looks well-nourished.

Was scrolling through your posts, trying to catch up. I saw a Black-throated Blue Warbler too!!! It was flitting around in my Beautyberry bush while I was next to it. The white bar on the wing really stands out!
Word is we have Bobcats around here, though I have had no sightings.

What a grat variety of birds! Beauties!

That is one beautiful bobcat!! We had a mother and two babies her a few years ago and loved watching them. Great shot.

What wonderful sightings, especially the bobcat. I've only seen one once in 36 years in the mountains.

What an impressive collection of visitors! I am envious but glad you shared your fine pictures.