Trout fishing is very popular in Western North Carolina and the sport brings many anglers to our area. Last week, a local resident caught a 14-pound Brown Trout in Davidson River. While not a record, this is one nice catch. (NOTE: I originally listed the weight in error, stating the fish was 19 pounds. Guess even I wanted to exaggerate the catch.) 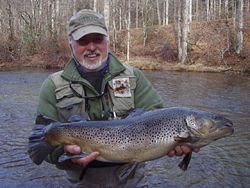 (Photograph from The Transylvania Times)

It is quite possible that this trout started life here: 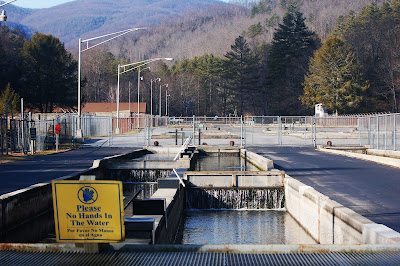 The Bobby N. Setzer Fish Hatchery is located in Pisgah National Forest and raises three types of trout to stock the rivers in Western North Carolina. 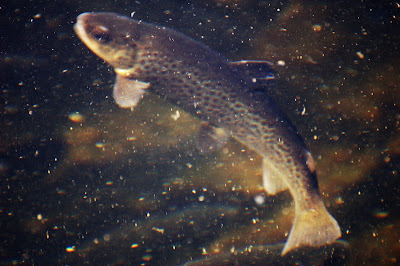 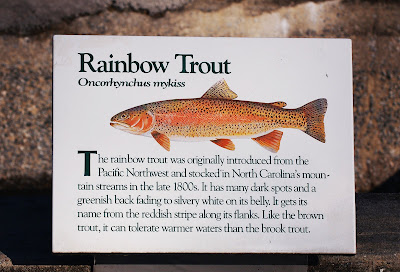 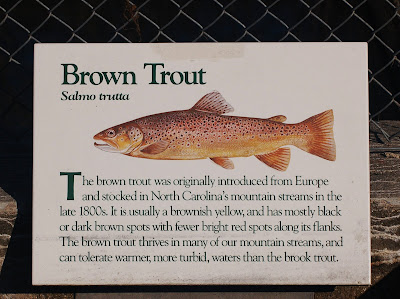 I was surprised to learn that only the Brook Trout is a true North Carolina native. 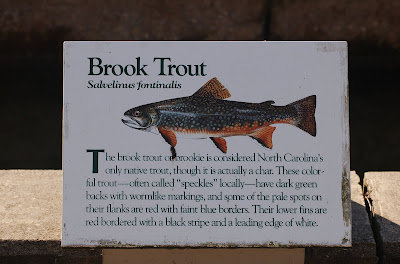 It takes a long time to raise a trout from egg to release. The fish eggs begin to hatch 30-50 days after fertilization. The young fish are maintained in indoor tanks for 4-5 months, until they are about 3 inches long. The small trout (called fingerlings) are moved to outside tanks where they are kept for another 18 months. When they are large enough, they are released into the rivers. 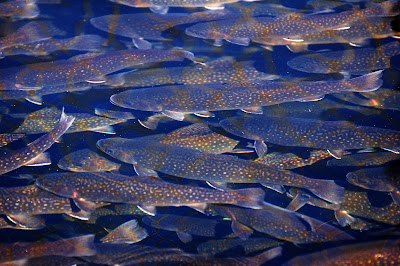 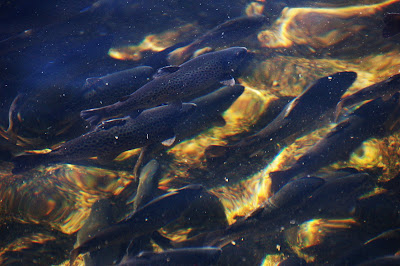 On a given day, one will find many fishermen and women along the Davidson River. Don't be fooled by the fact that these trout began life in a hatchery. They still are a challenge and not an easy catch by any means. 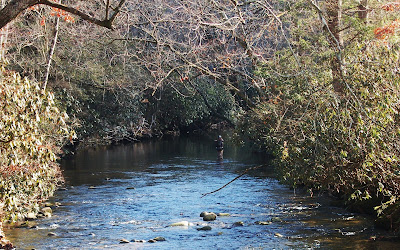 While we have suitable rivers and streams in Western North Carolina, many of them cannot support a sizable wild trout population. Stocking the streams provides more fishing opportunities than we would have without them.
The Setzer Hatchery has a large green space and gives fly fishing lessons to the public. What a treat to see so many people bring their children to learn about the fish and learn to cast.

Posted by NCmountainwoman at 8:23 AM

We have fish hatcheries here in the Adirondacks too. It certainly does a lot to increase the pleasure of those that enjoy that sport. I am surprised that that fish isn't one for the record book. It looks huge!

I have a problem with those people who do not eat what they kill. Seems a bit torturous if they don't actually do anything. John Muir agrees.

Ha - for a second there I thought I had accidently clicked on troutbirder's blog! I haven't fished since I was a little kid - it was fun until I caught something, and then I found it upsetting. Mr. Geek enjoys fly fishing, though. (PS - my word verification is "magnicat" - a particularly magnificent cat, or a magetic one?)

Mmmmm my favorite fish to consume is brook trout! I use to fish with my father and I loved when we would bring home dinner!! That was a huge fish the gentleman caught..and I'm sure he was a tough catch! Interesting post!

Stuffed Grilled Brook Trout is one my favorite foods! Great pictures !
Carolyn, I did a post to you today on The Writers Porch!

Carolyn we have quite a few fish hatcheries here in Tennessee. Near Tellico Plains fish are released into the river each Friday during part of the year so that fishermen have plenty of fish to catch. I haven't heard of any trout as large as the one from the Davidson River, however.

Oh Carolyn, My Daddy used to love to go trout fishing. We lived in southwest VA and he'd go to the Cherokee Lake area in TN --with his buddies. Sadly, he came home alot with very few fish. BUT--when he caught some, GEEE---they are GREAT eating fish!!! Yum!
Hugs,
Betsy

That is an impressive fish - my hubby would be drooling! Loved all your photos. My hubby got me into fly fishing about 5 years ago and now I'm "hooked"~!

This post reminds me that I haven't been fishing in a few years. I enjoy the tranquility of it. I must go fishing again this summer.

Good grief! What a fish.

G'day from an Aussie writer - the colours of those trout are amazing.

My boys love feeding the fish there except their hands smell like fish food for a long time afterward. ;) The last couple of times I've fashioned a cup out of paper which worked pretty well.

What an interesting post...some great pictures of trout, too! :)

Never saw one that big winter or summer. We have the ice huts out on the lake, now. When Big Dog and I walk out there, sometimes the ice fishermen give us one of the daily catch, which my husband cleans and I cook. Nothing's sweeter. I bring some oatmeal cookies for their coffee. and a good time is had by all.

My husbands passion is fly fishing. Hopefully someday we will get down to NC. Until then I will enjoy your photos and stories of your part of the country.
I don't think he has caught a Brownie that big. I believe brown trout are native here where we are. I'll have to ask my DH.

My husband is an avid fisherman but Lake Trout is his favoured catch. I don't think he would be unhappy with the trout in the first picture. We always eat the fish he brings home.

That is one big trout, my husband likes to catch brook trout.

Carolyn: That is one big trout. My daughter-in-laws brothers fish for trout from Lake Erie and they are also monsters. They do a put and take stoking in my lake and I have caught Rainbow and Palomino Trout.

Oh my! I usually head west to Montana for the "biggies". Maybe I should be heading east to N.C.

Science guy - Unlike many other "sportsmen," trout fishermen almost always eat their catch. I do not know a single trout fisherman who doesn't eat the trout or give them to grateful friends.

David - Thanks for dropping by from Australia. Glad you are having a good summer.

Rob - I've never been ice fishing, but some of our WI friends have huts that are pretty sophisticated.

I have been lucky enough to fly fish several times with a guide in North Carolina and Eastern Tennessee...it's quite expensive but worth every penny. Not only for the experiencce you eill have and the how to's you will learn! I wish I could afford to do it annually. Only thing i dislike in North carolina is we have found in the area we are in, it's hard to find a place to fish thats not posted. Either you pay the hefty fees and go with a guide, or there are very few public access areas to fish in. the clubs keep most the waters stocked as well as posted. Fun stuff anyway!

for the rrecord...any guide I have fished with has encouraged catch and release...and very careful and limited handling of the ifsh.