Rabbit is at Rest

One of my favorite authors died today. John Updike introduced me to Harry (Rabbit) Angstrom when I was a college student. I loved the book and the dysfunctional Rabbit and his family. Rabbit Run was followed every decade by a new Rabbit book, until the final book Rabbit Remembered in 2001. Some of them were better than others, but I enjoyed them all. Many women criticized Updike for his stereotypical portrayal of women, especially in the Rabbit books, but I simply overlooked that and enjoyed the wonderful writing. Updike could capture an idea and write about it in wonderful ways.

He authored many books, the most recent of which (The Widows of Eastwick) was published last October. He was a prolific writer and winner of most of the literary awards available, except for the Nobel. (He wrote a story in which the character did win the Nobel.)

I never had the pleasure of meeting John Updike, but I felt as if I knew him and I shall miss him just the same. I always had a dream that in 2011 he would surprise me with another Rabbit book. Sadly, that dream is not to be. 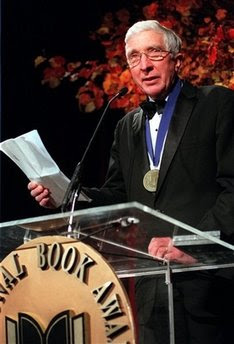 (Photo from the Associated Press)
John Updike left us with many thought-provoking quotes:

"Dreams come true. Without that possibility, nature would not incite us to have them."

"Born laughing, I’ve believed in the absurd,
Which brought me this far; henceforth, if I can,
I must impersonate a serious man."

"The artist brings something into the world that didn't exist before and he does it without destroying something else.”

And my favorite quote:
"Life is like an overlong drama through which we sit being nagged by the vague memories of having read the reviews.”

Godspeed, John Updike. We will miss you.
Posted by NCmountainwoman at 4:14 PM

Oh Carolyn, I hadn't heard this yet. I liked John Updike also. He wrote a neat book of poems back in the '70's.. I also love his quotes...

A Two Time Pulitzer Prize winning Author is a great loss in the Litarary World !Maybe he left an published manuscript? We can hope !

Updike was a Pennsylvania boy, from near where I now live--although, truth be told, he found Shillington, PA very stiffling.
He could write the best fiction, and some of the silliest fiction.
I appreciated that he reworked some of the great works in American lit.
He was 72, and died on lung cancer.

I had a brief brush with Updike a few years ago. He and I grazed the Conde Nast cafeteria salad bar side by side. I knew he was tall, but until I stood elbow to kneecap with the man, I didn't realize just how tall. The man was a giant in both the literary and physical sense!