We have come to view Labor Day as the end of summer. We celebrate with cookouts and picnics as we look forward to school, autumn days, and later holiday seasons. While we celebrate today, we should think of the days in which workers in the United States had little protection from unscrupulous employers. Workers were forced to work long hours under dangerous conditions. Little attention was paid to safety in the workplace. Very young children worked in mills and mines.

This Lewis Hine photograph shows a thin little girl standing by her cotton mill. It became famous in the movement to abolish child labor. 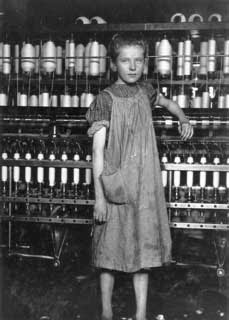 One person always comes to my mind on Labor Day. That is Mary Harris Jones, better known as "Mother Jones." 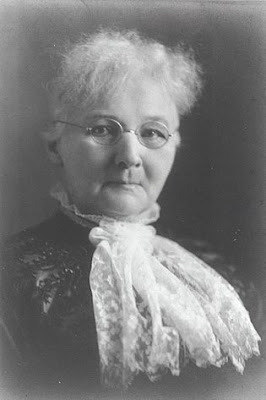 Born in Ireland in 1830, Mary Jones had major tragedies in her life. Her husband was a laborer who was poorly treated in the workplace. She lost her husband and four children to yellow fever. She started a dressmaking business in Chicago only to see it destroyed by fire.
---Mary Jones was more than 50 years old when she undertook the crusade as a union organizer to protect workers. She had a fascinating life and was absolutely tireless in her devotion. If you think Mother Jones is only a magazine, I encourage you to learn more about the REAL Mother Jones. Well into her 80s, Mary Jones led marches and helped organize unions, especially for miners.
---A great orator, Mary Jones left us with many great quotes. The most famous is probably, "Pray for the dead and fight like Hell for the living."
---For most of her life, Mary Jones did not have the right to vote. Of this she said, "I have never had a vote, and I have raised hell all over this country. You don't need a vote to raise hell! You need convictions and a voice!" She definitely believed women should have voting rights, but she wanted women to know that fact wouldn't stop her crusade.
---August 18 is the anniversary date of the ratification of the 19th Amendment, giving voting rights to women. The Amendment was proposed June 4, 1919 and ratified by a sufficient number of states on August 18, 1920. North Carolina ratified the amendment on May 6, 1971. (No, that is not a typo).
---As you celebrate today, think about those who paved the way to make our workplace safer. And also give thought to those displaced or suffering because of the storm.
Enjoy the day!
Posted by NCmountainwoman at 8:00 AM

Thanks for the reminder -

We have come a long way in a very short time. If you look at how women were treated in the 50's and before.
And yes, I am praying for those in the path of the storms!
Very nice post!

What a great tribute. I'd love for so many who say, "I'm just not going to vote this election" to read this and think of Mother Jones. Have a wonderful day Carolyn!

Your words are loudly applauded in this household.
For years, we got Mother Jones--the magazine--because my husband works as for our state teachers' union.
We are most definitely a union household. It seems popular today to speak unkindly of unions--when people do that, they are forgetting the history of labor over the centuries.
Thanks for the reminder!

Thank you for sharing this great piece of history!!

What an interesting post. Good for the strong and brave women of the past who paved the way for the freedoms we enjoy now.

She was quite a woman. An amazing figure, not only for women, but for oppressed people around the world.

Virginia Harris said...
This comment has been removed by a blog administrator.
September 2, 2008 at 4:21 PM

Great post. All too many forget that the organized unions were one of the first real signs of progress for workers who were victims of oppression by manufacturers in this country. It's unfortunate that "unions" have, by and large, fallen by the wayside and a lot of "corporations" are NOT truly favorable to low-wage workers.

Thanks, all. There were some very brave activists who brought the plight of the worker to light. It would have been so much easier to look the other way (as many of us do about child labor in other countries), but many fought like hell for the living. And we are grateful to them.