Premature Panic at the Pumps

When you live in the mountains, you rarely let your gas tank get less than half full. In the rural areas, there may be miles and miles between gas stations.

On Tuesday, I stopped by to fill up. As I was walking into the station to pay for my gas, an elderly man said, "You got here at the right time. They are getting ready to raise the prices by fifty cents per gallon." Rather perplexed, I continued to the station and paid for the gas.

I was fully aware of the impending hurricane, and most people expected a temporary reduction in gasoline supplies as a result. Apparently, the news spread panic in the mountains. Almost every place I went that day, I heard at least one person advising, "You better get gas today." As a result of the premature panic, people flocked to the gas stations in huge numbers. I received three calls from neighbors advising me to get gas.

Adding to the panic was the local news station, advising that some stations were running low on gasoline and that prices were rising to almost $5.00/gallon for regular. 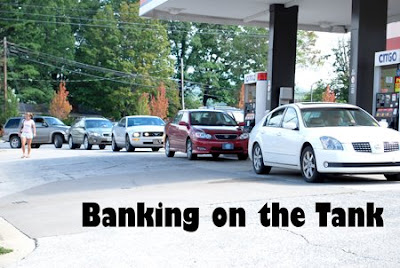 Photo from The Watauga Democrat 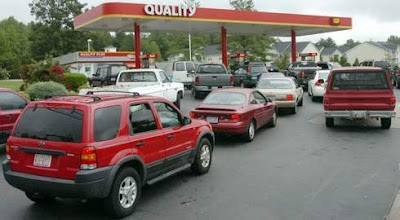 Phot0 from The Asheville Citizen-Times
I went to the grocery store on Friday. As I drove by the gas station near the store, I noticed large signs that read: Temporarily Out of Gas. When I was checking out, I overheard the bagger saying the station had sold out of regular gas on Wednesday and sold out of premiums by Thursday. Similar stories were heard from other stations in the area.
-----It is of note that there had been NO interruption of gasoline supplies at that point. The panic by consumers had dramatically increased the demand and created the shortage. There is no doubt that gasoline supplies will be interrupted for a week or so because of the hurricane. But in the mountains of North Carolina, the gasoline shortage (and price increases) began far earlier than necessary.
-----So, what's the purpose of this story? It demonstrates that panic among the public can create havoc and unnecessary cost. There are abundant stories of "price gouging." Hundreds of calls were made to the Attorney General's office. It is not likely that anything will come of the complaints. While I am not sure what constitutes price gouging, the stations raised their prices in response to an increased demand. The supply was not interrupted, it simply was insufficient to meet the demands for gas.
-----There is little doubt that supplies are now truly decreased. Prices will remain high. We will all adjust our driving habits wherever possible. And in several weeks, the supplies will return to normal and life will go one as usual. Each time the price of gasoline rises, it returns to a higher "normal" level. And we become accustomed to that. Three dollars per gallon seems a good price when you have been paying almost four dollars a gallon. What will it take for us to make changes in our lives? I wish I knew.
Posted by NCmountainwoman at 10:36 AM

I share your frustration. I heard that many local stations around here ran out of gas. I don't know how to get society to break out of the grip of panicked group-think, if it is even possible.

I'm ready! We are anxiously awaiting the new plug-in elec hybrids, but even that seems like too little too late. Buses and some trucks have been running on natural gas for some time - it's cheaper, and it comes from right here. My understanding is that our present cars could be adapted, and new cars could certainly be made to use it. Unfortunately, the answer to gas shortage to some is to drill...that's damageing to the environment, and is like sticking a finger in the dyke anyway. We need to get away from it as soon as possible (maybe sooner.)

Carolyn: This is just another example of price gouging by the producers of the gasoline and the stations. This is not right.

Our gas prices went up 16 cents a litre overnight on Friday...that is 1/4 of a gallon. We are paying up to $1.38 a litre on speculation. I stayed home all weekend.

There has already been so much gas gauging in Michigan these past few days because of news of the Hurricane. These gas stations should be fined!

Closed gas stations, long lines here. I had less than 1/4 tank yesterday and filled up on regular at 4.19. Stupid me. I should have bought three gallons and waited.

Many stations here are completely empty too Carolyn. It's crazy really. I stopped Friday morning, because I really was due for a fill up and paid $3.65. By the time I went back by that station 6 hours later, it was up to $4.05/gal. Craziness.

This is insane, and I see no end in sight. I blame the oil companies first and the speculators second. They are getting rich while gouging the working public.

Your photo reminded me of the oil crisis in the '70s. Anybody else remember buying gas on even or odd numbered days, based on your license plate number? And, we learned nothing from that event 30+ years ago. The car companies keep building huge gas-guzzling SUVs and the public keeps clamoring for them, while bemoaning the cost of the fuel to run them.

dog geek - I don't really think we will get away from the group think attitudes.

Donna - Little George Bush, eh? Someone joked that George W. Bush was his phrase for a drinking game during the GOP convention. He turned out to be the designated driver.

Helen - We will definitely get hybrids for our next cars.

Kerri - And with no change in the supply.

Fishing Guy - I agree wholeheartedly, but I strongly suspect nothing will be done.

Ruth - We are definitely letting the cars sit in the garage more often.

Shelley - I agree, but I don't think it will happen.

Mary - I probably would have filled up as well.

Jayne - It is crazy.

Kathi - I do remember those awful days in the 70s. And I surely don't care to return to them.