Regular readers may recall a post I did about my favorite hanging basket that has three hummingbird feeders attached. It is quite attractive and the hummingbirds love it. We hang it over the deck. 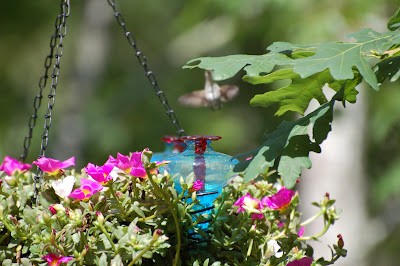 A red glass flower rests in each hummingbird feeder. One morning we went out on the deck to find all three glass tops missing from the feeders. We found them lying on the ground far below. Each of the feeders had been drained of nectar. What a mystery. A gray squirrel has been know to hop on the basket to climb from the deck railing to the tree and might occasionally knock one of the flowers off. But all three? And emptying the feeders as well? And at night? Not likely.

This happened for three consecutive mornings. Meanwhile, we also noticed a hole in the screen on one of our bedroom windows. Could this be at all related to the vandalism? 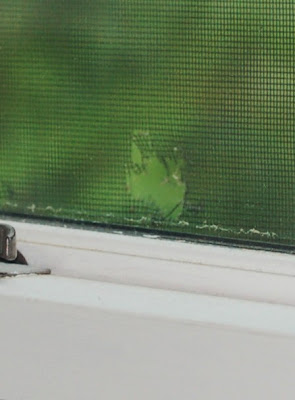 The moon was full at the time and shines directly into our bedroom. That night my husband awakened to see a huge rodent on the floor next to the bed! Then he realized it was a shadow on the floor and not something inside the house. He looked at the screen just in time to see a flying squirrel launch from the screen and glide in the direction of the hanging basket. Mystery solved. The flying squirrel had glided from a nearby tree to the screen. From the screen he glided to the basket, removing the glass tops and sipping all the nectar. 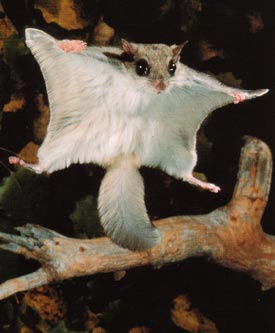 Photo from wonderclub.com
I removed the hummingbird feeders from the planter. We have other feeders for the hummingbirds. As we looked around the house, we found another screen that was damaged by the flying squirrel. I have no idea why he can't use the shingles for a launching pad. We haven't heard the squirrel on the house since we took down the feeders in the plant. Perhaps he decided to search for himself since our diner was closed. I certainly hope so.
Now, if I could just solve the financial market mystery...
Posted by NCmountainwoman at 10:32 AM

What a cool creature neighbor to have. I have never actually seen a "sugar glider."

Oh My! This is the best post I've seen so far today! How funny!

And if you get that financial market myster solved....please let me know :)

If you get that financial market mystery solved, please let CONGRESS know!

Cool post! Must've been neat to see these guys.

Very cool, Carolyn! But I gotta tell ya, I'd be very spooked...

You wouldn't believe how many times I have heard of gliders being the culprits of nectar stealing.
An interesting fact I learned recently: Flying squirrels outnumber both gray and fox squirrels (at least here in Ohio).
Isn't that amazing? I have never ever seen a FS here, but statistically, they are more plentiful that our seed eaters?

That's funny (well, not the part about the ruined screens.) Last year we had a raccoon visitor that would come up on the deck rail where my test tube hummingbird feeder hang, take the tubes off the feeder, remove the stoppersand drink the nectar, then (this is the amazing part) leave everything out on the deck rail - I guess for me to refill!

Awww. cool! We've had the occassional flying squirrel on our house before - the cats usually let us know they are there. I can't imagine what I would do if I woke up in the middle of the night and thought I saw a huge rodent on the bedroom floor!

At first when you said a large rodent, I thought--ooops. But a flying squirrel doesn't sound too bad.

An interesting solution to your mystery!

Carolyn: That was a neat story. I've never seen a flying squirrel except on film.

scienceguy - I had almost forgotten that term. We called them sugar gliders when I was a kid.

Kerri - It was funny afterwards.

Delia - Someone needs to let them all have a clue beyond, "We've got to do this now and there can be no oversight or accountability."

Mary - I'm so glad it wasn't me who saw the shadow. I think I might have screamed.

Susan - I didn't know that either. We see so many gray squirrels it's hard to imagine anything outnumbers them.

Helen - Perhaps if he had been as neat and stacked the flowers, I might have been more charitable. Guess they are not as considerate as raccoons.

Dog geek - I'm not sure what I would have done either.

Donna - I think I would have been spooked even if I knew it was a flying squirrel.

Pat - Would have scared me as well.

Fishing Guy - I had seen one during the summer as he glided to another hummingbird feeder. I was sitting on the deck at the time.

Dave - Thanks. I love your blog BTW.