Yesterday, I attended my first Hawk Watch at Caesar's Head State Park. While the park is in South Carolina, it is not far from my house. Every year, people gather to watch the migrating raptors soar through the air along the Southern Blue Ridge Escarpment. They glide effortlessly as the thermals and uplift keep them aloft. It was a cool day; hazy but with sunshine periodically.

I must tell you up front that "watch" is the operative word here. Just like "askin' ain't gettin'," so "watchin' ain't seein'." In case you are hoping for shots of soaring raptors, I will tell you that not one hawk made an appearance. There was a lot of talk of all the Broadwings and Red-tailed Hawks that were seen on Friday. More than 200 raptors were counted Friday. That was not to be the case on Saturday. In truth, I did not stay for the entire four hours, leaving after only an hour. So it is possible, even likely, that after I left the hawks soared through.

[Disclaimer: I have never before photographed a bird in flight, so keep that in mind.]

When I arrived, several people were gathered at the observation area. 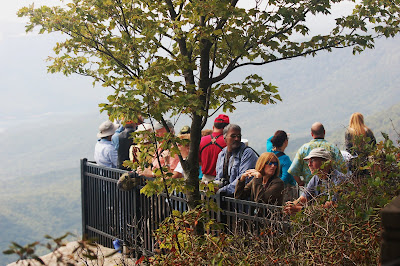 They were looking in all directions. Most of them stopped to welcome me to the group. The Ranger scanned the skies (along with everyone else) hoping to get that first glimpse. 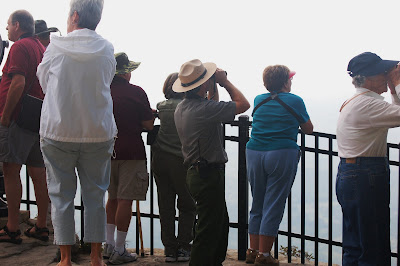 Not a hawk, but a vulture appeared on the horizon. This was sufficient to excite everyone in the crowd. 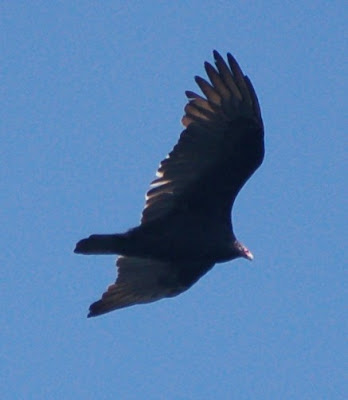 A Turkey Vulture soared past us. Despite the fact that these are relatively common around here, we all watched as if we'd never seen one. Seeing a vulture high in the sky is one thing; seeing one gliding below you is another. 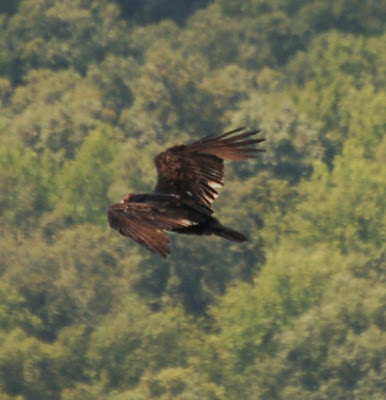 More and more vultures appeared, much to the delight of everyone. 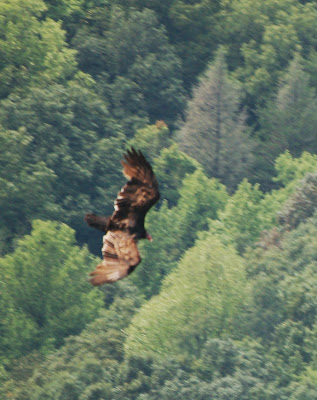 I just loved the way the group banded together. Within twenty minutes we were all on a first-name basis. As I was taking pictures, Miriam (whom I had never met before) suggested I take a picture of the little flower growing in a tiny hole in the large rock formation below us. So this one is for Miriam: 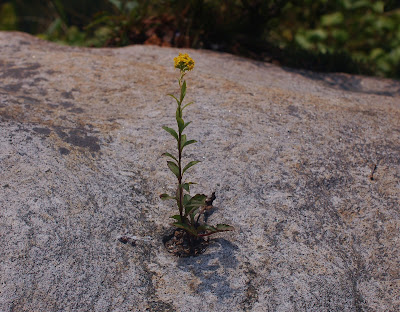 So I left my first Hawk Watch without seeing a single hawk. Was this a bust? Absolutely not. It was a WONDERFUL afternoon. Where else but during a bird watch would some stranger hand you a $2,000 pair of Swarovski binoculars and say, "Take a look through these, Carolyn." The group enjoyed sharing information about cameras, lenses, binoculars and experiences. One woman told her husband, "But I thought you said you have the Cadillac of binoculars." The husband replied, "Yes, but John here has the Masarati." I don't know if all bird watching groups are so friendly and congenial, but this one was wonderful and I truly enjoyed the time I spent with them.
-----The final picture is one of the trees below us. There is a tiny hint of the spectacular color to follow. I can't wait! 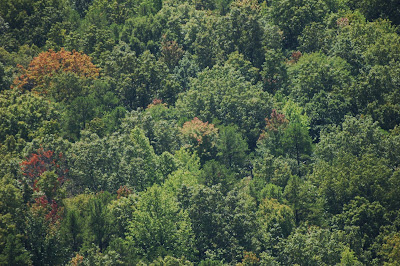 Fortunately, the hawks do not select one specific day to fly the escarpment. My husband and I will drive down there during the week to see if we can find some raptors. And I will do more practicing in photographing flying objects to give you some better pictures.
Posted by NCmountainwoman at 10:34 AM

Wait is the name of the game, huh? Actually, I love to watch vultures flying - they are beautiful in flight I think - not very pretty faces though.

"A bad day of birding is better than a good day of (fill in the blank - work?)"

Carolyn, I don't know how many "organized" birding events you have been to, but I can assure you that every one I have ever attended, from a morning bird walk to a weekend symposium to a week-long birding festival is just like your hawk watch. (Except for the fact that I usually see at least one example of the target species, LOL!)

Birders are THE BEST!! From sharing a look through their scopes to working their tails off to be sure you finally see the tiny warbler everybody else is "oohing" and "ahhing" about (despite the fact that you absolutely canNOT see the little bugger), birders are the most generous and helpful folks I have ever met.

I have never been made to feel stupid or unwelcomed at any birding program, and even when just walking a trail alone, meeting a fellow birder is cause to stop and say "Seen anything good?" Even if the answer is, "Nah - just some mourning doves and mallards," birders are happy to share their knowledge and experience.

Many birders also know about butterflies, dragonflies, wildflowers, etc., so that if the birding is bad, someone will say, "But, look - there's a such-and-such," so that you leave with at least one great memory of the day.

I have never done a hawk watch (plan to do so at Cape May next month) so you are one up on me. Hopefully, at your next hawk watch, you will actually see hawks!

Great post, and I love the views of the vultures from above. Mostly, I see them from underneath.

The birding was always better "yesterday." As in, "You should have been here yesterday, when we saw ___."

What a fun time Carolyn! Heck, just the anticipation of maybe seeing one flying below me would be enough. :c) Glad everyone had such a good time talking birds.

Sounds like an enjoyable outing hawk or no hawk! It would be my view that birders are usually the most congenial of people.

I think the vultures look beautiful in flight - especially how they glide.

Great captures of the birds in flight!! And it sounds like so much fun!!

Carolyn: Look for hawks and get vultures, at least you got really nice photos.
Tell katdoc that is fishing not bird watching. LOL

Sounds like a good time was had by all! (By the way, I just loved your dueling hummers down below - what stunning pictures!)

Helen - Yes wait is the name and I probably did not wait long enough.

Kathi - Nice to know my experience was typical. Such a nice group of people.

Jayne - We did all have fun. I wished I could have stayed longer.

Shelley - It amazes me how lovely vultures are in flight and how clumsy they look on the ground.

Kerri - Thanks. These are my first flying birds so I need more practice.

Fishing guy - It's "a bad day FISHING is better than..." with emphasis on the word FISHING.

Dog Geek - It was fun for everyone there, especially considering they all came to see hawks.

Just the experience of watching is fun enough! I've only been on one bird walk and the warblers we wanted to see didn't show up but, like you, we got along very well, on a first-name basis.

Your vulture in flight is fantastic!

I'll second that about shooting birds in flight...not easy!