In December 2009 one member of our household had a major injury, rare, complex and totally unexpected.  Happening as a surprise and just before Christmas, the injury caught us unprepared.  It was a stressful time for everyone concerned.

The recovery seemed to go as expected until June of this year, when it appeared a problem might require correction.  That was later confirmed in early December.  Not wishing to spend another Christmas recovering, we decided to postpone the necessary surgery until January.  Well, here it is already January and this is the week for the surgery.

Therefore, I will not be posting for about six weeks or so as I play the role of "Nancy Nurse" and assist in the recovery.  Thank goodness for my previous homecare experience!  So many things are more positive and easier this time around.  We have been able to make plans since we were not caught unawares.  We are eager to get this behind us and resume our active lives.

I will try to keep up with your blogs as time and Internet access allow.  And we do ask once again that you petition the deity of your choice for rapid healing and a good outcome.

This photograph of Lucy checking out the sled was taken the day before the injury.  Little did we know what was in store for us. 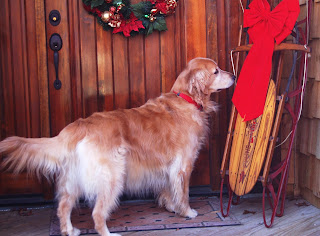 When the injured player returned home from the hospital, the dogs were so happy to be near him.  We placed a stool to keep them from coming too close. 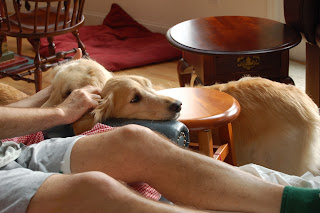 Lucy thought the quilt under the footrest of the recliner made a perfect tent. 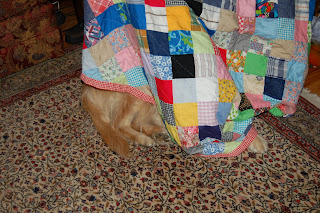 She spent a lot of time there while Ellie took her spot on the other side of the chair. 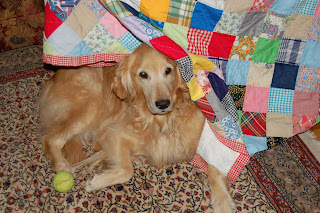 On a different note:  Many counties in North and South Carolina have school in session on this Martin Luther King Day.  The national "news" is presenting this as an indifference to the importance of this day.  In truth, this is not the only holiday that will see children in school.  Because of the unexpected number of snow days so far in this school year, the schools will be in session on President's Day and possibly Memorial Day and days have been tacked onto the end of the year.  The "Easter" break will be shortened and there will be school on several Saturdays.

So please, disregard what the media are insinuating.  This holiday is not being singled out but is one among many that will see students attending school.
Posted by NCmountainwoman at 11:41 AM

Best wishes for the injured player. May his recovery be swift and uncomplicated.

Best wishes to the patient and many good thoughts for the nurse. May your hands help to heal him and see him through this journey.

Your dogs bring their own healing powers, but then you already knew that.

I'm sure healing will be swift with you and the two girls at hand!

Sending good wishes to the player and his nurse!

Best wishes, and thanks for the note about school in session today in the Carolinas. This has been a tough winter already for y'all, and still a ways to go, so it makes sense that school officials would want to make up a day today. Alas, most of the "news" with which we are bombarded is hopelessly devoid of context...but I won't go into that rant on your dime ;-) May you know healing and renewed wellness in your household, even as Spring brings light and life back to our beloved mountains!

All the best to all for a quick and complete recovery!

Hope all goes well with the surgery and recovery. May patience be your portion as you act the nurse. I'm sure the girls will keep you both amused.

Good luck on the surgery and wishing you a fast recovery.

Having been the patient (for a much shorter recovery) I wish YOU well most of all - I know that the caregiver's job is often the most difficult. :)

Praying all goes well w/surgery and know you will do wonderfully taking care of the patient!

Golden's make the best nurses, don't they? We are keeping our fingers crossed for a speedy recovery!

Nellie from Beyond My Garden said...

I will miss your blogging but family care comes first. I appreciate the information about Martin Luther King Day. It did make me wonder.
Don't wear yourself out.
nellie

I do hope this recovery goes smooth and easily. (and fast!)
Love seeing the Dogs...happy to see the injured player return home.
We will miss you all. Take care.
Suz

Praying for a successful surgery and rapid healing for your injured player. May you know God's presence during a difficult time!

Praying for a successful surgery and rapid healing for your injured player. May you know God's presence during a difficult time!

Hi Carolyn, I wish your hubby the best --and pray that this time, things will work out FINE for him. He will be in good hands with you and the Goldens in charge.

Our crazy school system has only been to school about 10 times since the first of Dec. YET---they stayed out again TODAY... I cannot understand. How do kids learn anything these days???

Best wishes for a speedy and complete recovery.

Thanks for the note about MLK and the school systems. Most of the news also excludes the other relevant facts - many of the school systems held school this past Saturday as a make-up day and have other Saturdays planned; NC law requires every school system to hit 180 days of school AND be complete by a certain date every year. Thus, the school systems have to figure out how to make up the days early because there is no way to tack days onto the end of the year (unless they are ending prior to the required date).

I know from living at a high elevation that closing school is a real challenge for my county (2 high school in the whole county). While the valley roads may be clear, the upper elevation roads can be treacherous. The answer is that school buses only run on valley roads on some days, but that requires any kid near me to hike 3 miles to the nearest bus stop - and back up the 2000' elevation change at the end of the day. No lazy kid does that.

My prayers are for a successful surgery & a speedy recovery. I'm sure your loving hands will work wonders & the girls will provide entertainment for both.

I hope the surgery goes well, and I'm sure your husband will be up and about in no time with three wonderful nurses.

We also know that everything will go beautifully for the "injured player" and his recovery will be fast... due to all the golden vibes there and "Nancy Nurse"! Will be thinking of you all this week!
xoxoxo
Sammie, Avalon, Oz and our family

Best wishes to the injured player,our families injured player is also going back into surgery on Feb. 3rd. I will be keeping you and your player in my prayers with my player.
Blessings to both of you.

Sending very good wishes to your injured family member. He will definitely be in good hands.

Thank you for pointing out that the schools will also be open on other national holidays. That does make a huge difference. What's wrong with reporters these days? Why stir a pot that definitely does not need stirring.

You know you have my prayers my friend... keep me posted. xoxo

Just like many others, I believe the Omnipresent Almighty too reads your blog, knows well your predicament. On my part, I will pray for the fast recovery of your LOVED one. God bless.

Looks like Nancy Nurse has puppy helpers. Nothing like the healing touch of a cold nose!
Sending thoughts your way--both for the patient and the nurse.

Hope the injury heals up very fast!! My hubby had hernia surgery last Oct.
He did very good!!
Camellia's like acid soil and that is what we have. If the weather would be a little warmer we would have lots & lots of them!!
Thanks for your visit!
xx, Bambi & Fern

Wishing your patient all the best and a 100% recovery. Take care of yourself too.

Hoping for the best. And prayers.
More relevent issue on MLK is to google Greeley Colorado school board member response to the day.
Also check the Denver Post for 3 young children at a parade yesterday. :)

I'm praying for a swift recovery for the injured player (and good wishe for the nurse too!)

I shall be petitioning on your behalf. My husband has had to play "nancy nurse" for me so many times. Just watching him, I feel certain that it's harder than being the patient!

My thoughts are with you, hoping for a speedy and easy recovery.

Well wishes and healing energy to both of you!

May the recovery go well, your nursing be appreciated, and all your orders followed promptly and meekly. Also, order out for pizza.

Love the tent picture : ) Hope the wounded one recovers quickly too!!