That's Not What I Wanted

When I was a child, my mother taught me to receive gifts gracefully.  "Never let anyone know it's not what you wanted," she reminded me.  On many Christmas mornings, I have been glad the giver of some of the gifts was absent.  While I would never say, "That's not what I wanted," I must admit to having thought, "What on earth were they thinking?"

This Christmas brought a gift to our county.  Many of our friends and neighbors were delighted.  The snow began to fall Christmas morning and kept falling all day.  While others marveled at a white Christmas, I was screaming all day, "THAT'S NOT WHAT I WANTED!!!"  The snow continued to fall.  I cringed whenever anyone said, "Isn't it lovely?"

Our daughter was at the Chicago airport getting ready to board the plane.  Realizing we would not be able to get to out to pick her up, we made reservations for her at a hotel near the Asheville airport.  Just as her flight began to board, the Asheville airport closed and her flight was canceled.  At the end of the day, she returned to Milwaukee and made reservations to come down three days later.

Our son and his wife had wanted to return to their home the day after Christmas but the snow kept them here for a while longer.  So...the one who wanted to come could not get here and the ones already here could not get out.

The snowfall was widespread and EVERY SINGLE county in North Carolina (all one hundred of them) received at least some snow during the storm.

I'm happy to report that our son made it home and our daughter made it here and we did have some wonderful times with them, even if they did not make it the same time.

The birds appreciated the feeders and were active all day.

A cardinal sits in a nearby tree. 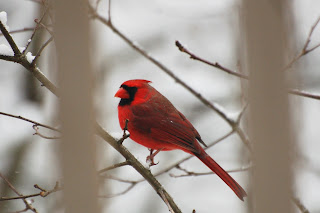 A Downy Woodpecker waits for the suet feeder. 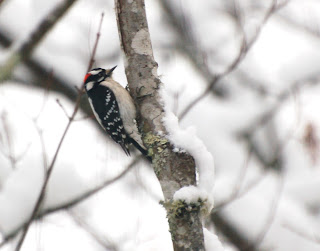 A wren and a titmouse share the sunflower seeds. 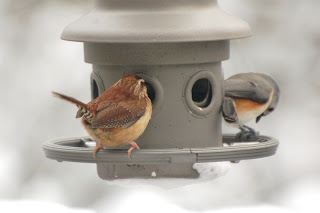 I must admit, I did not enjoy the snow at all.  We moved here to get away from the snow.  We had one of the coldest Decembers on record capped with the heavy snow at the end of the month.  I do hope it's not a sign of things to come.  That's definitely not what I wanted.

I hope all of you had a good holiday and got exactly what you wanted.  Somehow, I don't think this little goldfinch wanted this much snow either. 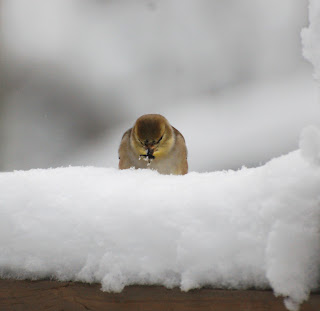 Posted by NCmountainwoman at 10:23 AM

I'm sorry to say that I was one of the ones who enjoyed the snow. We were in Hickory at my dad's house & had nowhere we needed to be. It was so nice to just watch the birds at the feeder & read all day...

It's been a while since I've been by here! I love these pictures of the birds in the snow. Very peaceful. Sorry your daughter and son weren't able to be there at the same time but I'm very glad they were able to get to where they were going in time.

Our December was rainy. We received way above average rainfall, and it was cloudy and gray almost the entire month. It's definitely not what I wanted either. We moved here for the promised sunshine. I hope for both of us that these were weather anomalies and not hints of future winters.

Love your very beautiful birds there!

Your birds are gorgeous, especially love the bright red cardinal against the white snow! I have a hard time as well concealing my displeasure or any degree of discontent - everything just shows on my face! I much prefer the snow to floods though - like in Australia or showers of birds or other natural disasters. At least the white stuff soaks the earth and brings forth spring with all its glory! As pretty as snow looks for pictures, I hate driving in this sloppy stuff and I also hate the real cold! Blessings anyhow!!

I awakened today to a snow covered landscape. It hasn't really snowed in a month, so while I don't care for it much, I realize we need the precipitation. It's been bitterly cold in Detroit, but dry.

I can see how the amounts you received would ruin your holiday plans. I hope your daughter finally reached you!

I am a coastal California woman, someone who has rarely seen snow falling at home. So of course I have a romantic notion of snow. Which I know is horribly wrong. I spent a Christmas in Boulder, Co. many years ago when it snowed for days on end. I remember the hush -- not a sound coming from the little neighborhood. I also remember slipping on ice. Ouch.

Your birdies are beautiful...the Cardinal shot is a real winner!

Happy New Year to you -- let's hope this is the last snow you see.

That shot of the little goldfinch pretty much says it all! Amazing that all 100 counties saw snow...unfortunate that some really got dumped on at a very inconvenient time.

And their was no snow on the plains of Colorado when we got to Greeley and non one the way home across Nebraska. At home maybe about two feet waiting on my driveway. Funny how Mother Nature works sometimes. Still all's well that ends well....Even in snowy North Carolina

Okay, you didn't like the white stuff, but you have to admit that a cardinal in snow is a lovely, lovely sight.

Glad everyone was able to get there safely, even if the trips were long.

We had similar weather and I felt the same way--maybe because we had such a hard winter last year. It has warmed up the past week but we're supposed to get it again this weekend. I don't mind it too much if the snow doesn't stay on the ground all winter like it did last year.

OK-so, if you don't like snow, move to central PA. Please, really, do it.

We used to have snow. But not any more. Last year we had 20 inches and we were ecstatic.

This year--less than one inch. TOTAL. That's it.

I've never lived where it snows, so I don't quite understand the joys (or lack of) living in it. To tell you the truth, until my husband corrected me, I thought a snow blower was the same as a leaf blower. Good luck!

We had winters like this here thirty years ago. I've learned not to count on anything during winter. We were thrilled not to lose our power this time. And you did get some great bird pictures!

Well --you know me. I love snow... BUT--this year, it prevented my two sons and families from getting to us..... AND--since they had to go back to work, they couldn't come at a later time....

SO--let me say to you that you are one of the lucky ones who DID get to see your kids--even if it did snow.....

None of us can do much about Mother Nature --but I guess I feel better if I can gripe about it a little..... Oh Well---tis life.

Your post reminds me of when I was flying home to Kentucky and there had been a huge snowstorm on the coast and my Mom said they wouldn't be able to get me at the airport which was an hour away. I decided that I would make reservations at a nice hotel, order room service and wait it out. I was kind of excited about doing this, but when I got off the plane my brother was waiting there--Fun spoiled again by my brother...But it was not what I wanted, but just as you found it all works out!

I hope you're doing well, and I wish you and your family good health and all the best for 2011!!

At least your kids were able to come, but sorry your plans were messed up! A happy New Year to you!
It seems the same in different countries: the most severe winter every they tell me!

Welcome back Carolyn! Well, we loved it, but of course, we were not expecting out of town family either. I know it created a huge disruption in the Christmas celebrations of many people. Glad you all were able to eventually be together. :c)

Beautiful bird photos!
Sorry you were on the recieving end of an unwanted gift...but glad you were able to see both your kids too.
Happy new year!