The Day I Met a Favorite Singer

My friend handed me a copy of "The Shepherd Express" as I was leaving work.  I didn't look at it until much later that evening.  I saw a little notice on the bottom of page three.  I screamed at my husband, "Look at this!"  The notice said that Judy Collins...THE Judy Collins would appear at a nearby book store to talk and autograph her new CD.  I looked at the time.  I had little more than half an hour.

Judy Collins has always been one of my favorite vocalists.  I own every single one of her LPs; that's old-timey vinyl records for some of you who may not be familiar with the term.  I thought it was worth taking a cover over for the signing and perhaps she might autograph it.  I grabbed my favorite one, "Whales and Nightingales," and ran off to the book store.

Copies of one of her books were lined up near the door.  I felt obliged to purchase one, especially since I was going to ask her to sign my album cover.

I went downstairs to the coffee shop where Judy Collins was expected.  She came in and I was astounded.  Here I sat, not three feet from Judy Collins!!!  She talked about her life and sang several songs and she was every bit as wonderful as I might have imagined.

After the performance, I quickly walked upstairs where I knew the signing would take place.  I was third in line.  As I approached her, she saw the album cover and started chatting as if we were old friends (much to the dismay of the people lined up behind me).  We talked about the various songs on the album and then she autographed it for me.  She was charming and gracious.  I thanked her and started to walk away with my treasure.  She called out, "Carolyn.  Don't you want me to sign the book as well?"  So I handed her the book which she also personalized.

I was totally in awe of this performer whom I had admired for so many years.  On the way home I felt more like a college student than the mother of two grown children.

The album cover hangs in our little library. 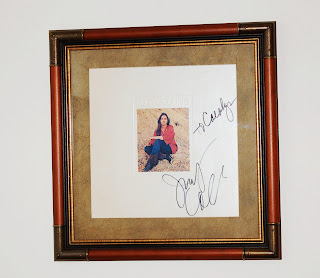 Amazing the coincidences that led me to meet Judy Collins.  What if my friend had not handed me the "Shepherd Express?"  What if I hadn't looked at it until the next day?  What if the book store hadn't been so near?  What if I couldn't have found the album so quickly?  But that day everything fell into place.

You may ask why I selected this particular album among the many I owned.  Simple.  This Judy Collins album was the first gift my husband gave me while we were dating.  And now it is even more special.

Judy Collins will never remember meeting me, but I will never forget meeting her.
Posted by NCmountainwoman at 10:53 AM

Wednesday greetings to you, I too love Judy Collins! I had all her albums, a huge songbook of hers, played guitar and sang all her songs as well. I haven't heard of the c.d. you mentioned but will have to check it out. What a wonderful evening for you. I have met Joan Baez and many other rock stars-when I was in high school. But how fun to meet Judy now.
Thanks for sharing and congrat's. Love the framed album.
Hugs, Noreen

This is a wonderful story, Carolyn. I'm glad the stars lined up for you!
I only own two autographs: one from Harry Chapin and the other from Sherri Lewis.

Neat story, Carolyn! Love your shot of the Titmouse, too!

Very sweet. She has always been on of my favs too (although I confess to having been more drawn to Joan Baez).
Were I to get an album autographed--as in the first gift I received from my now husband--it would be Peter, Paul & Mary who would have to sign. Don't think that's going to happen now.

I love it when things work out like that - it was obviously meant to be for you to meet her. And, I just bet she would remember you!

A great story about serendipity - also nice that you chose the album gifted to you by your Husband.

how wonderful....i loved her many years go as well.....you have a treasure!

That is so nice. I'm glad all fell into place for you.

OMD! She is probably one of my faves too! I have played guitar for ... well.. ever since I was about 10. I made a record (vinyl)with my band in '82, and JC was one of my major mentors! Wonderful post of a perfect timing!
xo
Sammie, Avalon, Oz and Miche

What a wonderful story, Carolyn.... She sounds like a wonderful lady.. I've always loved her voice and music also.. I'm SO glad you got to meet her...
Hugs,
Betsy

What a great story. I can understand why you framed the album cover.

I especially loved your last sentence! So happy for you!

What a neat story my friend! I can only imagine your excitement! A very special keepsake indeed.

This is a wonderful story Carolyn...thank you for sharing it today. I am smiling ear to ear because I can feel your JOY!!!!

I love this story! I'm a fan of Judy Collins as well, started listening to her when I was 15 and the album was Wildflowers. Her music has been a part of the soundtrack of my life. How wonderful that you were able to meet her. That album cover is so beautiful, and the significance of it is a truly wonderful thing. Wow!

My twin brother went to see her perform in Monterey last year. He called me the next day to say, "She sang Albatross!" We were giddy like teenagers again.

What a fun and wonderful thing to happen. A real perk to 2011 beginnings!

What a lovely story. Another great memory for you!

I'm so jealous! She's one of my favorites. And from what I've seen of her in interviews, she has always seemed like such a beautiful soul. Thanks for confirming my suspicions, you lucky devil!

That is so clever to frame it!

She is certainly a cultural icon of our generation.

Thanks for your comments, everyone. I should have made it more clear...the signing was several years ago, perhaps in 2003.