The Golden Girls got their favorite Christmas present.  Antlers.  They love them.  And there is a very strange process that repeats itself every single time we get new antlers for them.  There's no way to understand the dynamics, but here goes...
Each dog gets an antler 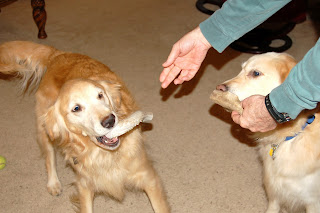 Lucy takes hers to her bed to begin chewing. 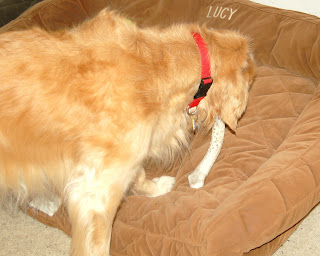 Ellie works on the floor with hers. 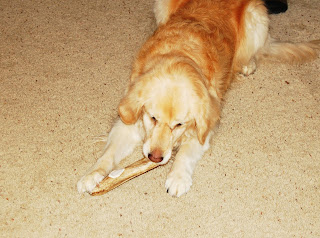 Lucy will decide after a few minutes that she prefers the one Ellie has.  She will take her antler and lie next to Ellie.

Lucy holds her antler and sneaks a lick of Ellie's. 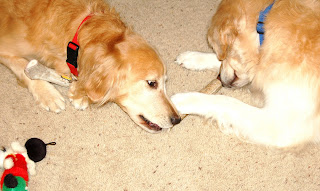 She puts her mouth on one end.  Ellie does nothing to keep this from happening. 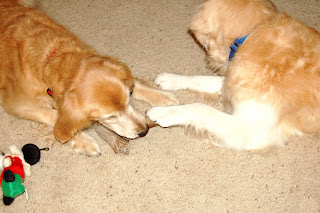 Finally Lucy has the antler that Ellie had.  Ellie will not reclaim it and has no interest in the antler Lucy had. 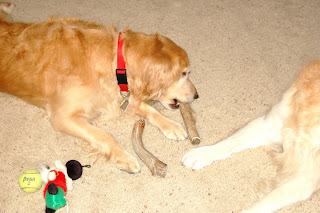 Believe it or not, the antler Ellie originally had is the only one the dogs will chew.  No matter how often we "offer" the other antler, neither of them is having any of it.  At various times, one or the other of them will chew the antler.  Ellie's best opportunity is in the late evening when Lucy is so tired she sleeps soundly nearby.  Ellie will chew on the antler for an hour or more.

Fast forward two weeks.  Since Christmas the girls have enjoyed the antler.  Not both of the antlers...only the one Ellie was given.  The one Lucy had for a few minutes lies untouched.  And here's a picture to prove it.

You will note that the antler on the left is practically pristine, while the one on the right has been reduced to one-third its original size.  We haven't a clue why this happens, but neither dog will chew on the long antler until we have discarded the small piece of the other one. 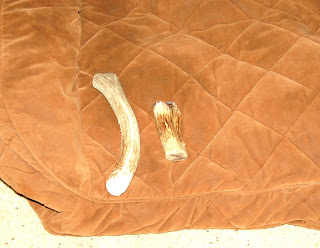 This has been a troubling week for every one of us.  There are so many places on our planet where people are suffering to an extent we can hardly imagine.  Let's focus on them for a while this weekend.  For them, and for the families that grieve their losses.


HAVE A GOOD WEEKEND!﻿
Posted by NCmountainwoman at 10:40 AM

Hello!! I've missed your blog the last couple of weeks and its been nice to catch up! I really love your header pictures and your other snow pictures too!

I enjoyed this post! I guess the girls are just saying you don't eat 2 good antlers all at once! ?? :-)

I've never heard of antler treats, but now I need to know where I can get some.

Have a great weekend!

Ellie - you are a sweetheart - that is such funny behavior, but guess what? Sammie and Avalon have the same sort of dynamic about toys - Avalon is brazen about stealing stuff from Sammie, after which neither Sam nor Avalon will play with A.'s original plaything! I haven't had antlers around here for a while - must get some - those are huge! And yes... we will think about those in need - thank you for such a thoughtful reminder.
xoxoxo
Sammie, Avalon, Ozzie and Mom

Golden's are a very special breed of dogs!!! Yes where do you get antlers??? Bambi use to love to chew a butcher bone and no other kind would she give the time of day for.
Now that she is 13 years and 3 months old she will not chew on anything but her foot!!!!!!!!!!!!!!!
Thanks for your visit.
XX, Bambi & Fern

Oh - if we could only unlock the minds of our pets! My dear departed Golden loved "stealing" tennis balls from the driveway of her friend, an Australian Shepherd. The owners of the Shepherd would put a ball in their driveway just to give Breezy her thrill! When she got it home, she forgot about it, and I just gave the ball back so she could steal it again.

What funny girls! I've wondered about getting Mingus an antler treat ... now I just may. Sounds like something he would enjoy. They are supposed to be very good as chews go.

"Life's better in the mountains" Yes, ma'am, it is.....even here 190 or so miles northwest of y'all! Our Lab has some strange preferences about what he chews. He must have 5 or 6 tennis balls, his favorite toy, and I guess some taste better than others because he has his favorites and can tell the difference.

Your Goldens are just so cute... Makes one wonder why dogs do the things they do....

Yes---it has been a sad week in our country. There are alot of people with mental illness who need HELP.

We did get out today to get some groceries and run some errands. The main roads were good and the back roads were fair.. It was nice to get out though.

Have a wonderful weekend.
Hugs,
Betsy

How very interesting! But I'm sure to them it means something!

What an interesting post! Have dog psychologists done any research on these strange behaviors exhibited by your dogs? OK, I'm just teasing, lol!! I'm going to have to look into antler treats for our grandpuppies. I think our Milo - a chihuahua - is as long as the unused antler!!!

Have a special week-end!

Your girls are definitely distinct individuals. At least your life is not dull with them around.

Obviously you gave Ellie the 'good' one.

That is too funny Carolyn! So, once you get rid of that one, they'll enjoy the other one? How interesting!

Indeed, I also am thinking of those whose lives have been so impacted around the world this weekend. Hope you all have a peace filled weekend my friend.

I love the story of the antlers. Isn't it funny how dogs have "rules" that we don't understand?

MOL isn't that always the case one child always wants what the other has....just like food is always better out of the other dish.
LIFE IS BETTER IN THE NC mtns and I wish I was there.
Your golden girls are beauties
Madi and Mom

Love seeing your Golden's loving deer antlers. They are such healthy great chews. Dropped over from Merrilymarylee's for a pleasant surprise.
(please feel free to remove my URL, it is the only way blogger will let me sign in and I can't find away to just message you--not trying to sell antlers!)

Aren't they funny that way? Sam recently broke a tooth on an antler, so we've been a little cautious about offering them. We love how they clean teeth though - so we are definitely at crossroads as to what to do with them!

How funny those goldgen girls are. It's interesting though, because my doxies do the same thing with bones.

That is strange. I've thought about have two dogs on and off over the years. But never did. Of course, the Mrs always added her opinion that I "could barely handle one."

Ah, the mysteries - your girls are so sweet