More than a Picnic

Labor Day is celebrated in the United States on the first Monday in September. For many it means the end of summer, the start of school and a holiday for picnics and parties.

Needless to say, Labor Day means so much more, especially in these days of high unemployment througout our country. Since the first Labor Day on September 5, 1882 to this Labor Day in 2009, we should reflect on American laborers and the hardships they endured at the hands of sometimes ruthless employers. Employees were forced to work in dangerous situations for long hours. Children were employed for long hours and little pay in mines and mills. Hardly any attention was paid to worker safety. Loss of life and limb was simply a cost of doing business.

One of my heroes was a remarkable woman who changed so many of the working conditions. She was Mary Harris Jones. A diminutive woman who looked like a grandmother, Mary Jones became known as "Mother Jones." 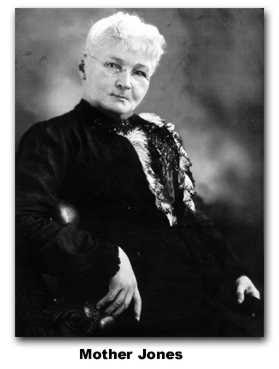 Mother Jones was born in Ireland and her family emigrated to Michigan. She suffered many great losses in her early life. She lost her husband and four children to yellow fever. She started a dress-making business in Chicago and saw it burned to the ground.

Mother Jones did not begin her activism until she was fifty years old. She was fiercely protective of children and organized the "Childrens March" in which children working in the mines and mills marched to the home of President Theodore Roosevelt. The children carried banners saying, "We want to go to school" and brought the problems of child labor to the forefront of the news of the day.

Mother Jones worked with many striking workers and was often jailed and/or fined for her activities. Yet still she persevered. Among other things, she helped the Pullman porters in Alabama in 1894, the Pennsylvania coal miners in 1902, the Ludlow Coal Mine workers in Colorado in 1913, and the steel workers strike in 1919.

Mary Jones helped establish unions for women, especially for domestic servants, silk weavers, shirt waist workers and women bottlers in the breweries. She was a great public speaker and gave us many wonderful quotes. Among my favorites, "Pray for the dead and work like Hell for the living."

She died on November 30, 1930 and left a legacy of better working conditions for all workers, especially women and children.


The following are two photographs from Lewis Hines whose beautiful (and frightening) photographs of children in the workplace were famous in the movement to enact child labor laws in the United States.

So this evening as you grab that hot dog, chicken leg, or yet another rib, give a thought to what this day really means. This is a day (which actually began in Canada) of celebrating workers of all types and of celebrating the early pioneers who risked their lives to make better working conditions. Especially now, think of all the unemployed workers who are desperately looking for jobs. Think about their families in need. And vow to do some little something next week to help them.

HAVE A WONDERFUL AND SAFE LABOR DAY!
Posted by NCmountainwoman at 8:09 AM

This is a wonderful post about the real meaning of this holiday. I did not know about Mother Jones before. WHAT a woman she was! Thanks for this today.
Suz

Thanks for the interesting and informative post on Mother Jones. I had heard the name before, but didn't know much about her.

Great post, Carolyn, of the TRUE meaning of Labor Day. We Americans don't want to work like they used to, do we???? They say that is why so many people have come to America for a better life. THEY are willing to work in the fields and the factories --while we sit around thinking that that kind of work is demeaning.

God Bless Mother Jones and those like her who helped make OUR lives better.

have a great day.
Hugs,
Betsy

Well I'm not quite sure what to say about this one. How about... if I still had 10th or 7th grade American History, would you be willing to come up to Bluff Country as a guest speaker? Teenagers will sometimes say "history is boring" but they listen real good when people speak from the heart. Thanks Carolyn

Wow! What great information, thank you for sharing! I loved learning about Mother Jones.

I wonder how many of those lost in the Triangle fire were under the age of 18? Great Post! Absolutely great!

Carolyn: What a neat look at the history of the times for Labor Day.

I've never heard of Mother Jones. Thank goodness for people like her.
This holiday & it's real meaning should be made more public. I think we sometimes tend to forget why we really celebrate a special day.

That was a really neat post...hope you had a great long weekend!

I didn't know about Mother Jones - thanks for the education!

Thanks for sharing this information in such an interesting way. I have to agree with Betsy's comment. Our farmers in southern Ontario cannot get local workers to pick crops and have to bring in workers from Mexico and Central America. One of our local farmers who has a large orchard spoke at a meeting recently and said he pays more for Mexican workers because he has to pay minimum wage plus housing and basic health coverage for them.

Hope you had a great Labor Day weekend.

The true spirit of the day. Thank you so much for reminding me. A wonderful, thoughtful post.

Really special post. I'm sending the link to my children and friends.

Thank you for writing this.

Great post, Carolyn!
I've heard that Mother Jones was not one someone wanted to cross.

There's a lot of folks fighting mountain-top removal coal mining who find inspiration from Mother Jones. Some (including Judy Bonds and Maria Gunnoe) remind me of her. Thanks for the thoughtful post.

Thank you for this tribute to Mother Jones. In this present day, when labor gets a bad name, it is good to be reminded that there was a time when conditions were horrific, and it took brave women (and men) like Mother Jones to improve workers' lives.