I've mentioned that last week was rainy and foggy. The rain has continued (and is falling right now) and we have widespread flooding throughout our county and neighboring Henderson County and Jackson County. We have a rain gauge and recorded 11 inches of rain from Thursday thru Sunday afternoon. Four inches of that fell during the night on Saturday.

Here are some photographs from the Asheville Citizen Times showing some of the flooding problems in Transylvania County and Henderson County. We remain under a flash flood warning and many roads are closed due to high water. Several trees have fallen due to saturated roots and there are intermittent power outages all over.


The river banks lie just beyond the trees in the background. The rest of the water is a flooded pasture. 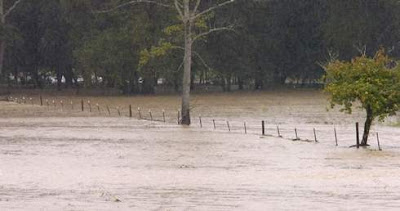 With most of this pasture under water, these animals take to the higher ground. 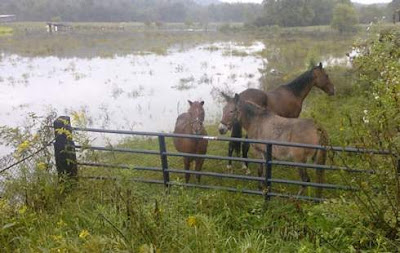 This street is under several feet of water. 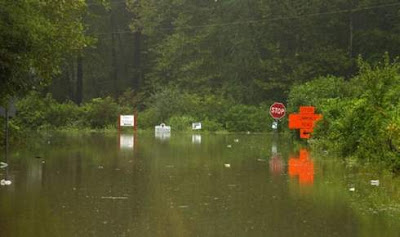 The river has taken over this highway as well.

With the rain and fog, Sunday was a great day for football, wasn't it? NO, NOT IF YOU WANTED THE GREEN BAY PACKERS TO ACTUALLY PLAY THE GAME!!! Aaron Rodgers is a great quarterback but it's pretty hard to get the ball off when you are flat on your butt on the ground. Rodgers was sacked SIX times and knocked to the ground an additional FOUR times.

Photo from The Milwaukee Journal/Sentinel. 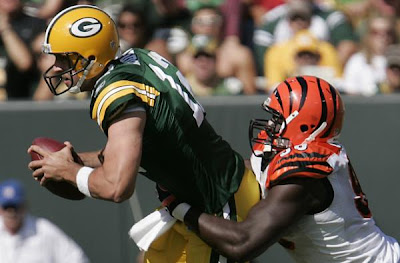 The receivers couldn't hold on to the ball even when Rodgers managed to get off a good pass. They were hit solidly on the numbers and dropped the ball at least FIVE times. FIVE CATCHABLE BALLS. With a few miracles, the Packers were within a touchdown/extra point with the ball and 45 seconds left. Still they managed to lose the game with mistakes and penalties. All in all, my Sunday was a pretty lousy one. Hope yours was better.
Posted by NCmountainwoman at 12:41 PM

Oh - sorry about the Packers. Although we live near Cincinnati we don't exactly pull for the Bengals. We were amazed that they won!

When we lived near Asheville our homes were on the top of hills, so we didn't worry about flooding. However, getting to work would be tricky with all that flooding. Sheesh! I hope everyone keeps safe & dry until it calms down...

Carolyn: What a soggy mess, sorry to see all the rain. My Steelers lost also with the kicer missinf two field goals.

Wow! That's a lot of water. Hope it all dries up soon.

All that water is terrible. I was just reading that as much as 20 inches fell in parts of Atlanta. That is some storm.
I hope the water recedes soon!

That's an amazing amount of rain to fall in such a short amount of time. If that happened in California there would be catastrophic flooding.

We had a Sunday on the road, driving from the sierra foothills to the coast. A lovely 225 mile drive.

I can't imagine that amount of rain in such a short period of time. The damage is going to be overwhelming.

So you are a Packers fan. Yeah! I love the Packers, but first I am a Bears fan. I guess that means you cheered when the Packers whooped the Bears a week ago. Now what happens when the Packers meet Minnesota? I hope Aaron can beat Bret.

But all this rain should make for nice leaf color shouldn't it? Hope so, as i will be up your way to see that next month!!!

I hope you are on high enough ground.
I just watched the NBC evening news and they talked about the flooding in Atlanta.
You are somewhat close by--so same general weather system.

Not a good Sunday for you all around. I hope the rain lets up soon and the earth can soak up all that rain. I always feel for the wildlife in times like this, they don't know when it will ever stop.

Wow, you got a lot more rain than we did.

We are drenched too! It has rain 10 days straight but we needed it and it hasn't caused any flooding as of yet!
I guess you know my Titans are 0-2,
losing both games by three points and giving both away by doing some dumb stuff! :(
The front 4 are not doing their job in GB! Aaron should not have gotten sacked as much as he did!I'm going to watch Peyton!

Stay safe -- it looks as if more is coming!

It does sound miserable. Rain, rain, go away... I'm reciting that poem for you.

Thanks for the basil advice. You were right, as usual. It's in the house now.

Also, thanks for the woodpecker advice. We've tried lots of mylar (strips, balloons) to no avail. I loved the sprinkler idea until I realized the freezing problem. But, we might be able to use motion detectors to set off a noise or something that moves... We're brainstorming but I very much appreciate your input.

That's an amazing amount of rain. I saw all of the news about Atlanta, but I hadn't heard about your neck of the woods.

I'm heading for Charlottesville on Friday. I'm hoping for no rain, but knowing us, we'll make the best of it even if it does rain.

I only watch college ball until Superbowl Sunday, and then I watch pro ball. Who knew you were such a football lover? I like that!

Hi Carolyn, Our Sunday was DITTO yours.... My football team lost (Titans) to the Texans. Two of my sons are big Texan fans so they BOTH called me to gloat..... GADS!!!!!

AND--we've had 7 days of rain--but luckily it has been spread out and there has been no flooding. Our rains have been steady but not heavy. Guess we're lucky --compared to your area.

It was certainly a very wet and miserable Sunday - so we got lots of chores done around the house.

I have an interview this morning and am trying to figure out how I'll go due to so many road closures! Thankfully, the rain has stopped for now here, but like you, we got close to a foot of rain in three days!

Rain is unreal! Grandsons' school is closed in Atlanta. Charlotte is still pretty dry. I'm sure the golden girls are miserable.

Beach area got rain last night from Tropical Storm Fred. Had to tranquilize dog and let her into her hidey hole in the pantry,

Did you ever go to a Packers game? We didn't but our son did. We used to watch those games in NC and think, "How can anyone sit in that weather?" Then we moved there and understood. . . .

Sorry to hear about your Sunday! I am ordering sunshine for you right now! Can't help you w/ the football but be glad they aren't as bad as our detroit lions!

The flooding is a drag and I'm sorry you're in it. Let's be thankful nothing like Hurricane Hugo is out there.

We've been under clouds for a week - a little rain - small breaks of sun. Gloomy.

Stay safe. I love your neck of the woods.If I lived anywhere else it would be in NC.

Sunday was a great day until the Cowboys lost on a last-minute field goal by the GIANTS of all people. Ugh.

Stay safe in all that flooding.

Sorry about the poor weather and the poor play. So it goes.

Thanks for commenting, everyone.

Bug - We are also on a hill and we didn't even have any drainage problems.

Fishing Guy - Sometimes, it just isn't meant to happen, is it?

Robin - Oh, it does sound like a beautiful trip.

Rae - It's always great for the Pack to whip the Bears, especially when it's at Lambeau. I know I should switch to being a Carolina Panthers fan, but I just can't leave the Packers even if we have left WI. You just have to love an NFL franchise owned by the people!

Pat - The predictions about the leaf color are contrasting. One view is that the rain will help but the peak will be later. Others say the rain will dull everything.

Donna - Yes, same fronts and we were fortunate that we didn't get hit as hard as Atlanta and parts of Georgia. The rainfall was very spotty, affecting only three counties in North Carolina.

BB Suz - I was astonished to see the soaked birds coming to the feeders in such great numbers.

Marylee - Yes, we often went to Packer games, thanks to a friend who had "Milwaukee" season tickets. My husband went to some of the frigid games, but I drew the line when it was snowing, windy, with single-digit temperatures.

Oh Mary! Are you back? I've missed you and quit checking your blog because it made me too depressed 'cause you weren't blogging. It is very unusual to have this much rain not associated with a hurricane. Gotta go check "Mary's View."

sorry about the packers...oh well
Man..i heard about all the rain and flooding...
My sister in the sandhills...near pinehurst didnt get much rain..guess u got it all there.