Man on a Mission

I've always said that if you give a man on a mission some duct tape and PVC pipe, he can do almost anything.
----------There has been a fierce battle at our house for quite a while. It's between my husband and the squirrels. For more than a year, the suet feeder hung without disturbance. We watched the squirrels try to climb the pole to no avail. Then one day, one squirrel learned how to get to the suet. Within a week, it had spread the word to all the squirrels in the area. Not only did the squirrels eat the suet, they chewed on the feeder as well.
----------My husband's mission began with a jug of water. Whenever he saw a squirrel on the feeder he would run out and douse the squirrel with water as it ran down the deck post. The squirrels quickly learned that if they ran down to the lower porch, they were safe from the water.
----------Next came the super-squirter water gun. It didn't seem to faze the squirrels at all. I think they appreciated the bath.
----------His next attempt was with a little pistol that shot plastic BBs. The pistol had a range of about three feet, and the little plastic BBs came out with very little force. It clearly wasn't going to work.
----------Bring on the BB pistol with a CO2 cartridge. You know, a BB "Uzi" that shoots 15 shots in a row. I will tell you that my husband is not a hunter so it's not surprising that this pistol didn't work either. Although we do have some BBs imbedded in a few of the trees.
----------We looked everywhere for some kind of baffle that would deter the squirrels. We didn't find one, although the folks at Wild Birds Unlimited said they would replace the suet feeder if the squirrels destroyed it to the point that it wouldn't hold suet.
----------Last week, my husband made his own baffle with PVC pipe and duct tape. The pipe covers the straight section of the pole and swivels when a squirrel attempts to climb up. For the moment, IT WORKS! I say "for the moment" because I know that one squirrel will figure it out and tell all the others.
----------Here are some shots of a squirrel determined to get to the suet. It's quite foggy here, with intermittent rain and warmer than normal temperatures. So the pictures aren't great, but they entertained me. This particular squirrel is a bit cautious. In previous attempts it has fallen all the way down to the ground. And this is a second-story deck. 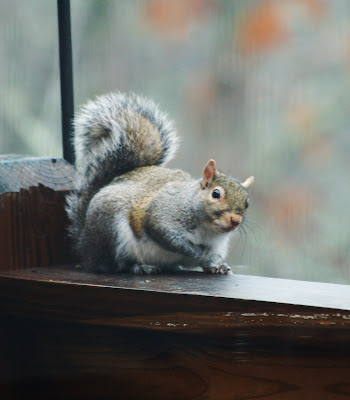 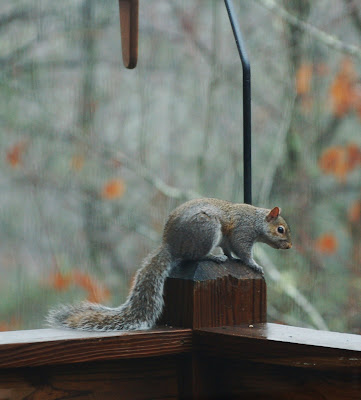 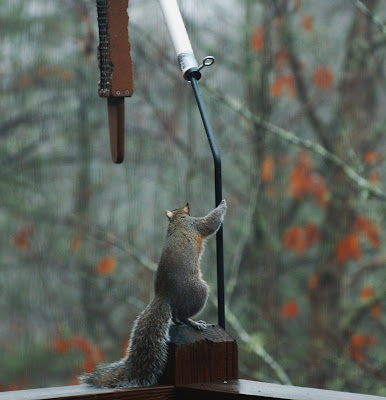 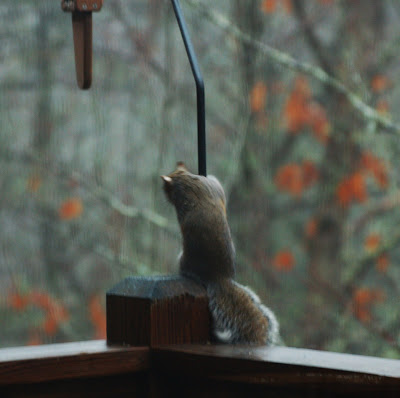 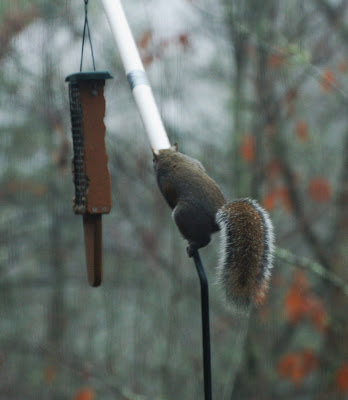 The instant the squirrel's paw touched the baffle it began to swivel. The squirrel, possibly remembering previous experiences, immediately turned and headed back down the pole. 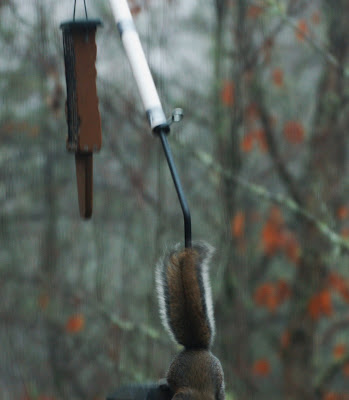 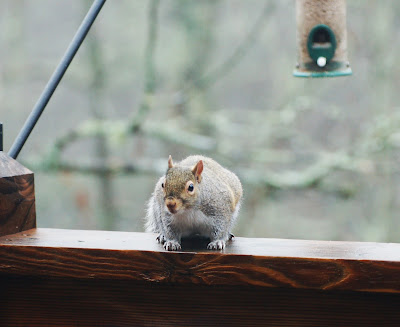 I have been quite entertained on these foggy days, watching the squirrel attempt (and fail) to get to the suet. Truth be told, however, my husband's antics in trying to get rid of them were actually more entertaining.
Posted by NCmountainwoman at 9:47 AM

I usually put out corn for the squirrels on a tree far from my bird feeder, but that doesn't work. The squirrels can eat an entire ear of corn in a day! Then they are on my bird feeder. The first feeder I had was plastic and the squirrels destroyed it. Then I bought a "Squirrel Proof" feeder. The feeder has a metal mesh around the seed basin and the squirrel can't fit their head through the mesh. That doesn't stop them though, they just use their hands to reach in and grab the bird seed. At least they haven't been able to eat the metal mesh yet!

Squirrels are SO resourceful! I try to keep the squirrel fed AWAY from my suet feeders. In this cold weather, our squirrel is laying low ... eating off of his winter stores. BUT, once it warms up again, he'll be bouncing around ... never enough food in its estimation.

Give a man PCV pipe and duct tape and he can solve any problem!

Hee hee! Sounds just like my dad and his never ending battle trying to outwit the squirrels. He constructed a homemade double baffle for his birdfeeders that has actually worked for several years now. I keep telling him he should patent it!

I'm still surprised that we never get squirrels at our feeders - I guess our house is just a little too far from the acorn-filled woods.

You have me laughing. And the series of pics with the squirrel plotting to get to the feeder is great. I'll be waiting for chapter two! :) Should I say that my money is on the squirrel? I say that because I have them here, the little red squirrels, and they just won't take "no" for an answer. I think they must be extremely intelligent animals. Good luck and keep us posted on the success. If it works ... you can make $$ selling the idea!

An entertaining post.....and I can imagine the entertainment you have had watching.....

Squirrels are very clever, they normally work out how to get what they want. I have been trying for years to keep them away from bird feeders.....I am afraid they won....they now have their own feeder (squirrel) which I fill with nuts......
At least they do not damage the bird feeders anymore.....

Oh how I know what your husband is going through. It does give me something to do though and keeps up my engineering skills.

ok I have got to have better detaikls here...i have battled the squirrels for years..although they are fun to watch they eat me out of house and home when it comes to bird seed...i have tried water gubnns and bb guns, but acccidentally killed a squirrel and that upset me...course you have to wait about 3 days, they usually learn how to get into stuff in a few days time!...keep us posted and maybe pic that shows the whole device!!!

GREAT POST. I absolutely love the photos and commentary! Our multi-year battle was with Moles. Think Caddy Shack. Too bad we weren't neighbors, your husband would have been consulted!

I was hoping that you would post a photo of it. It may work yet. :)

A few cups of hot coffee, several challenging feeders and a yard full of squirrels doing their squirrel olympics can keep Christmas company entertained for hours!!Good luck with your new invention!

Those squirrels are so fun to watch at times.
This is what solved my problem. A slinky. Read about it in birds and blooms. I have shepherd hooks for my feeders and I drape a slinky over the rod. It works! they cannot climb the pole.

How Cute.... Watching the squirrels could be almost as much fun as watching the birds... Your hubby ought to patent his device.. Bet he could make LOTS of money!!!!!

Luckily we only have a few squirrels this year--and none have bothered our feeders YET... I'll contact you if we need help!!!!
Hugs,
Betsy

They are ingenious aren't they!? I'll look forward to see if they figure a way around this set-up. If not you guys should market it!

Melissa - We also tried putting out corn. Word got around and we had TONS of squirrels who quickly ate the corn and headed for the feeders.

Cicero - They really are resourceful. And I have no idea how they teach one another.

George - Oh, yes. Of course you guys need some WD-40 every now and then.

Dog geek - Great. I hope ours will work for that long.

Cedar - I suspect you are correct. Sooner or later they will find a way around the baffle.

Cheryl - For some reason, the squirrels think the suet is irrestible. They will ignore peanuts in favor of the suet.

Cedrorum - My husband always has some kind of project to work on. Guess that's one secret of successful retirement.

Hendersonville - I think I'll take squirrels over moles any day.

Karen - I have my doubts, but who knows?

Tina - It is amazing how our guests want to sit at the bar stools or table and watch the birds and squirrels. They are entertaining.

Toni - A slinky. We'll try that next summer on the front yard feeder we have on a shephard's crook. Wouldn't work on the pole over the deck since they don't have to go to the top to hop on the suet.

Betsy - I think we'll wait a while to apply for a patent. It's only been a week, so the squirrels have plenty of time to figure it out.

Jayne - I actually miss seeing my husband's battle with the squirrels. He is pretty smug right now.

Helen - What would hot pepper suet mean for the woodpeckers? Or was that a joke?

This is truly hilarous. I can laugh now because I went thru similar gyrations for many years

Hi, I've been tagged by Corin and now am tagging you for 7 "weird or random" things about yourself. See my post for today... As i said, not necessarily weird, but definitely random!" Have fun with it!

Carolyn: Not fair, you get photo opts and they get nothing. Those little buggers will figure it out.

It's been a squirrel holiday at your house and mine! LOL!

I'm so glad you posted this...your hubby made me roll over in fits of laughter.

Fabulous captures of the squirrel!
Maybe your hubby needs to "patent" the device :)