It was late in the afternoon when I heard that heart-sickening "thud."  It's a sound like no other, varying only in intensity.  A bird hitting the house.  From the sound I knew it was a large bird.  I quickly looked out to find it was a Yellow-Bellied Sapsucker.  Dang!

The good news was that the bird was sitting upright and was not gasping at all.  She did not seem to have been injured, merely stunned.


Yellow-Bellied Sapsucker recovering on the deck. 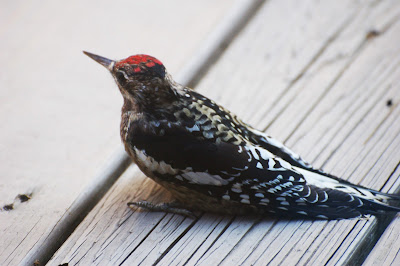 In less than a minute the bird flew into a nearby tree and sat absorbing the dwindling rays of sunshine on her body.  She stayed on the tree for a few moments and they flew away. 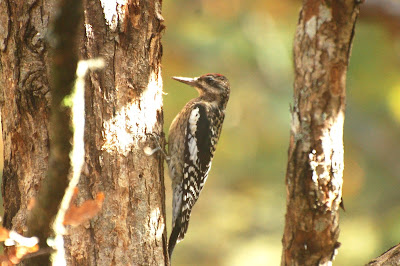 Sapsuckers are relatively common in some areas of the NC mountains, but we do not often see them.  We've never had them visit our suet feeders.  So we were especially delighted that this bird recovered so quickly and without apparent long-term damage.


[So a white supremacist will be the new White House Chief Strategist to DJT.  So much for bringing the Nation together.]

Posted by NCmountainwoman at 10:26 AM

Just as I finished reading this post I looked up and spotted a pair of yellow-bellied sapsuckers in the pine out back. They are the first I have ever seen on my SE Texas coastal property. Talk about coincidence...

I've seen them up in the trees on campus, and glimpses of them down in Catawba County. Beautiful birds!

So glad that the bird was ok, and you managed to get these photo's too.

So good to see that Sapsucker survive the crash. That sound is such a heartbreak when a bird hits the window. Good that this worked out well.

Great capture of photos, and good wishes for little bird who flew wrong. Sending him/her some energies to discern house from trees.

So glad the sapsucker survived.
My heart always sinks when I hear that sound. Always so relieved to see them fly away..........

Glad the bird was not injured. We also found a sparrow that seemed unable to fly when we were going to the parking garage this week, but it seems to have been confused on how to get out. Pat managed to capture it an set it outdoors.

I love sapsuckers too! We have them only in the summer and they never come to our suet feeders either. However, they do peck their sap holes into our trees, which I love seeing all year long as a reminder of these wonderful birds. I'm so glad that yours was okay.

That appointment by DJT made me give up all hope that he might actually try to be a president to everyone.

So glad she survived. So disgusted about Bannon.

Gary - Coincidence is a good thing. Thanks for dropping by

Linthead - Yes, I wish we saw them more often.

Jan - I always shudder when I hear that thud. And I'm delighted when the bird is fine.

Robin - Yes, I hold my breath until I know the bird is fine.

Barbara - Thank goodness it doesn't happen too often, but we are at the top of a hill and I think that makes it worse.

Cheryl - Yes, I'm always glad when they are not seriously injured.

KB - We are at the border of their range so we don't see them often.

Vicki - Bannon said that he is not a White Nationalist. I don't really believe him.