Sean Kenny spent many happy hours of his childhood playing with his LEGO™ bricks.  He was so interested in them he wondered if he could actually make a living creating sculptures with the bricks.  Turns out he could.  He became the first LEGO™ Certified Professional.  He designs and builds art for many companies in several countries.


Here in Western North Carolina we were privileged to have his "Nature Connects" series of LEGO™ brick sculptures on display at our NC Arboretum in nearby Asheville from late July until the end of October.  There were fourteen massive sculptures made entirely of LEGO™ bricks.  And these were the "normal-sized" bricks, not the larger ones.

The day was periodically overcast when we went, but the sculptures were absolutely gorgeous anyway.  We were greeted at the entrance by a very large Ruby-throated Hummingbird sipping nectar from a flower.

The first exhibit, near the entrance of the Visitor Center 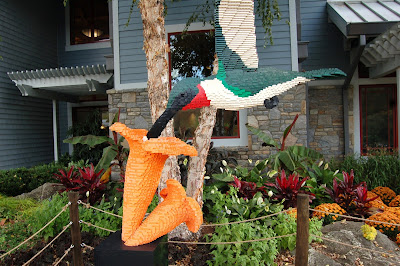 A lovely Monarch butterfly sitting atop a flower 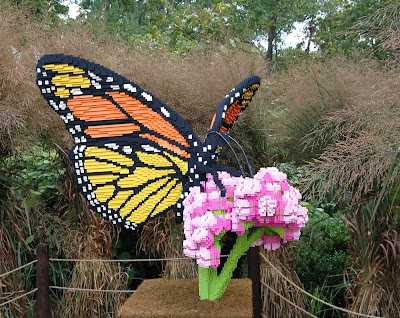 The large sundial and the bird.  All made with the bricks 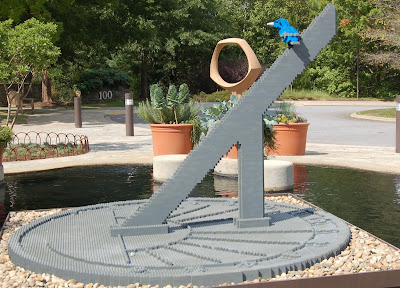 The American Eagle stood out in the sun with the overcast skies above. 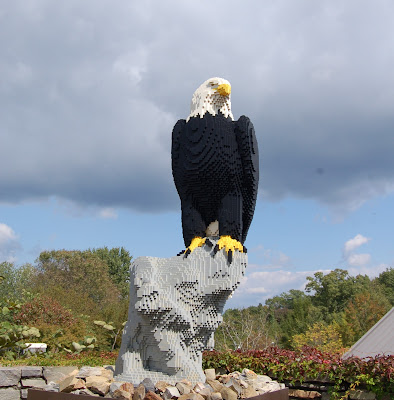 A larger-than-life gardener worked in the soil. 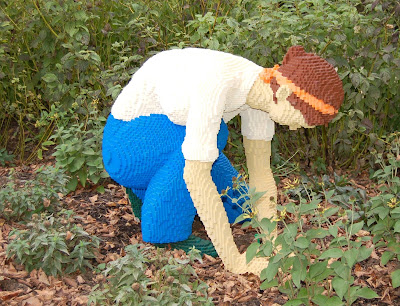 Yes, we did indeed find every single one.  I'm not certain why I selected only these but perhaps I will show you some more of them at another time.

I've never been one to try to define art.  I've always maintained that art, like beauty, is in the eye of the beholder.  Some purists might argue that a sculpture made of children's building blocks does not qualify as "real" art.  Who cares what they say?

I will give you the definition of art in the Oxford Dictionary:
1. [mass noun]  The expression or application of human creative skill and imagination, typically in a visual form such as painting or sculpture, producing works to be appreciated primarily for their beauty or emotional power.

I can assure you that these sculptures do indeed provide appreciation of their beauty and bring powerful emotions.  They do indeed connect us with Nature.  If you are near a Sean Kenney display, you should definitely visit.  Whether you call it art or not, you will be impressed by the size of the sculptures and the number of bricks in each one.  (They did list how many bricks were used to create each sculpture but I was so caught up in the beauty I barely noticed.)

Posted by NCmountainwoman at 11:39 AM

Wow! These are truly beautiful sculptures. I love that Monarch butterfly. What a sight that must have been. What a great way to spend a day.

Those are incredible! I had no idea that such incredible art could be made with legos! I love the hummingbird. That is most definitely art! Thanks for sharing.

Those are awesomely impressive!

Astonishing! I love all kinds of art. And the first thing I always think of is, "How on earth did anyone ever think of doing that?"

I think the women bending down in the garden is beautiful! My son was a prolific Lego builder. It is very hard to do; especially on the scale that you have just shown us! Enjoyed this!

What an marvelous job he has done creating amazing art from a toy. Kind of makes me want to go out and buy a set.

Far Side of Fifty said...

Those works of art are so interesting and beautiful! What fun to see them! :)

These creations were simply amazing. I have seen other Lego art online and always been impressed by the complexity and design. And I willl add this artists's name to my memory bank of exhibits to see if we get a chance.

I love these..........I am keen on all sorts of artwork.
They really are striking and capture the imagination.
My little Grandson loves his giant Lego.........

These are absolutely wonderful, and I am so pleased you shared your photo's here with us.
Simply wonderful creations - each and every one of them.

Thanks so much for posting this. It is such a nice respite from the current news. It's amazing what can be done with Legos.

Thanks for your comments, everyone. The artwork was truly amazing. So large in scale the photographs do not do them justice.

That is just the coolest thing ever! Wow!