Lucy had a much more difficult time in puppy kindergarten than our Ellie had.  Part of the reason was that she didn't seem to see the need to do what we were teaching.  She especially hated the "sit" command.  I've mentioned before that she had many questions about the command.  Oh, do you mean NOW?  How long must I sit?  Where?  Is this really necessary?  I don't see any reason for this.  You get the idea.  Finally she realized that we weren't going to stop our training until she did what we asked of her.  And that we would regularly reinforce the training for no good reason.  So she decided it might be in her best interest if she went along with it.  And generally speaking, Lucy will do whatever is in her best interest.


Note the "puppy" sit so typical of youngsters.
Even at this age Lucy did not like being told to sit and stay.
[Yes, she once had a Carolina blue collar like Ellie's] 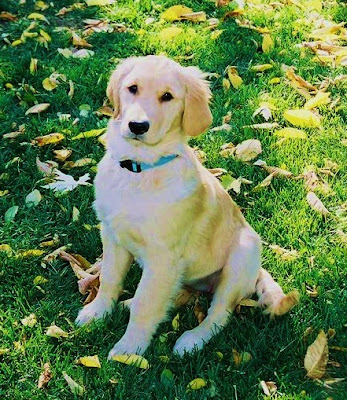 Guess what?  She never did learn to sit like an adult.
She kept the puppy sit position even as an adult.
(And no, there is nothing wrong with her joints.) 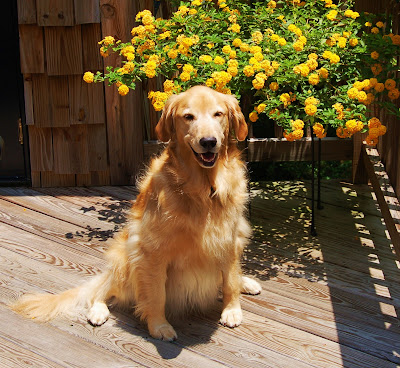 She clearly does not like to sit and pose.
Her face and demeanor convey how she feels about this. 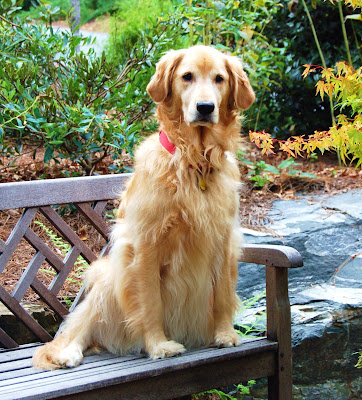 It's still much warmer than normal for this time of year but we are expecting some cooler weather soon.

I knew things had exceeded the normal wild and crazy I have come to expect when the first "news" I heard this morning was that DJT was going to announce whether or not he believes our President of eight years was truly born in America.  Like the pied piper leading the rats, he piped while the press and networks flocked to hear what he had to say.  I did not, could not, watch.  But I heard later that he did indeed state that he believes President Obama was born in America. Wow!  I'm glad that's settled.  But wait!  Say it isn't so.  The lead story on this evening's PBS Newshour was (ready for this?) about DJT and his big announcement.  So now I can't watch even Newshour.  Thank goodness Samantha Bee is back from hiatus to keep me informed.

I don't often quote the Holy Bible, at least not on this blog, but with all the rhetoric it might be a good idea for us to pay attention to the words of St. Paul in his letter to the Philippians.

You need not be a "believer" to accept these words.  So think on these things.

The moon is full once again.  I hope you have clear skies so you can enjoy it.

Posted by NCmountainwoman at 7:43 PM

Even NPR reported on DJT's revelation. Oh my goodness - I was in disbelief. That is certainly not news to anyone. The only part that is news is that "The Donald" thinks that it is news.

I love the puppy photo of Lucy. She is a smart girl, and I love how she sits. I especially love her very serious face :) Lucy is much more interesting than DJT - that's for sure!

Lucy's face is an absolute picture.
I love the way she sits.....
She can always make me smile.

Have a lovely weekend.

Had to laugh at her adult sit. She is a true original.
Too bad he isn't selling cars--he has the right approach for working the media and putting on a show. Pretty sure running a country doesn't fall in that framework. Sigh.

Lucy really does have a wonderful mind of her own. She is such a character! I don't watch the news at all EVER. My mom has started having the NY Times delivered to the house here, and I have been reading that in the late afternoons. It's nice to actually read journalism. I think TV "news" and the internet has made the First Amendment a joke. Sad, very sad.

Since much of the media is owned by just a few people, I am sorry to hear that NPR is also giving "the non-news" it's voice. Love seeing Lucy as a pup, and now a regal adult in a cute sit.

American Politics and Journalism have become a reality show. I could not be more dismayed and disheartened. Where are all the End Times Prophets now that the signs of the Apocalypse truly are all around us?

One of my favorite passages from the NT. And , yes, I do keep thinking of such injunctions. It boggles my mind that so many "evangelicals" favor DJT.

I love love love the puppy sit pose. What a sweetie.

KB - I have quit trying to figure out just why he gets so much media coverage. Every single time he opens his mouth.

Cheryl - She makes me smile too.

Ms. A - We really thought she would grow out of the puppy sit.

Robin - I also like to hold the newspaper in my hand.

Donna - I cannot for the life of me figure out why DJT draws from anyone calling himself a Christian.

Hi ... a little late to this post but thought I must just stop a while and say I think Lucy looks grand sitting there, she always makes me smile and want to give her a big hug!