One Tree for Each Veteran

Over the course of three years (1941-1943), The United Daughters of the Confederacy planted 125,000 Red Spruce trees along the Blue Ridge Parkway.  The trees were meant to be a living reminder of the Confederate soldiers North Carolina sent to the Civil War.  Among those are 40,000 who died during the war. 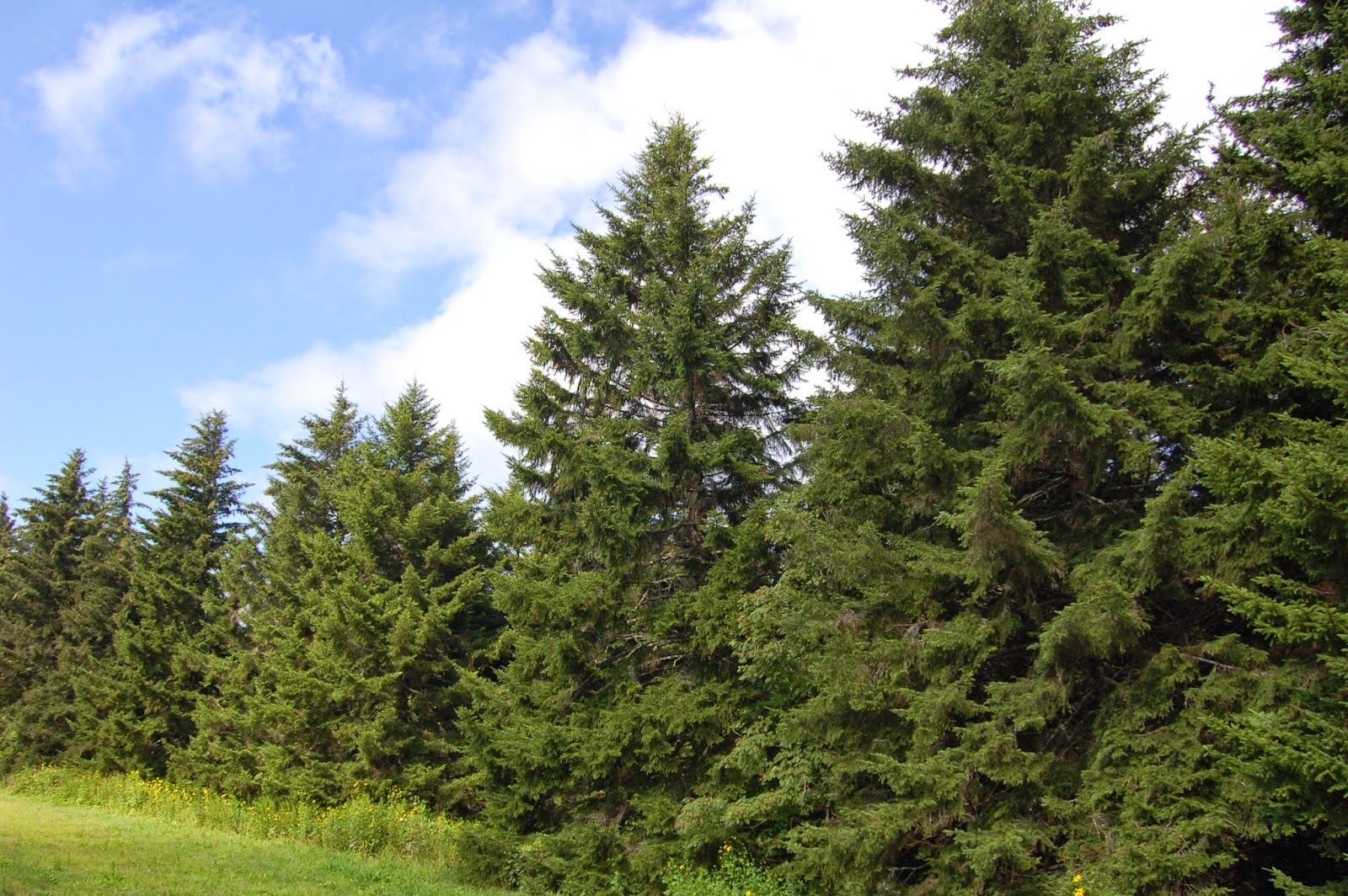 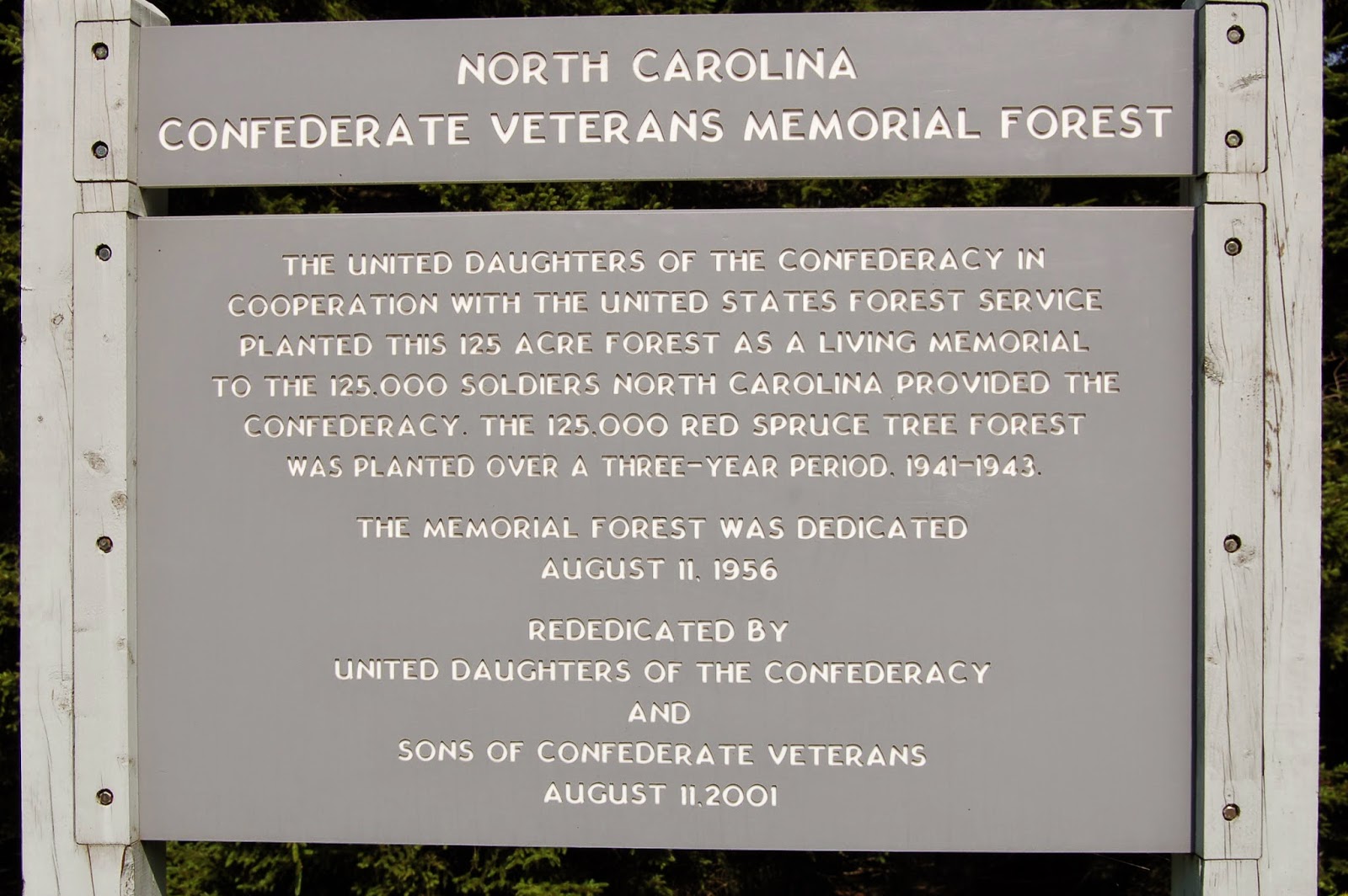 The forest was dedicated in July of 1942 by Josephus Daniels, well-known publisher and former Secretary of the Navy.  He seems almost to have compared the South in the Civil War to Europe under the Nazis.  But you can judge that for yourself.  He said, in part, "The Southern people, aided by noble patriots in the North, overcame military rule and regained control of their affairs.  They have no doubt the suffering European nations will throw off rule by force and once again order their own way of life."  Remember this was 1942.  The forest was re-dedicated in 1956.

People outside our state may not think North Carolina played much of a role in the Civil War.  It is not truly the "deep South" and did not border the Mason-Dixon line.  However, battles were indeed fought here and almost every small town square has a large statue of the Confederate Soldier.  The statue in front of the old court house building in Morganton, NC, lists the names of many of my ancestors who fought and died in the war. 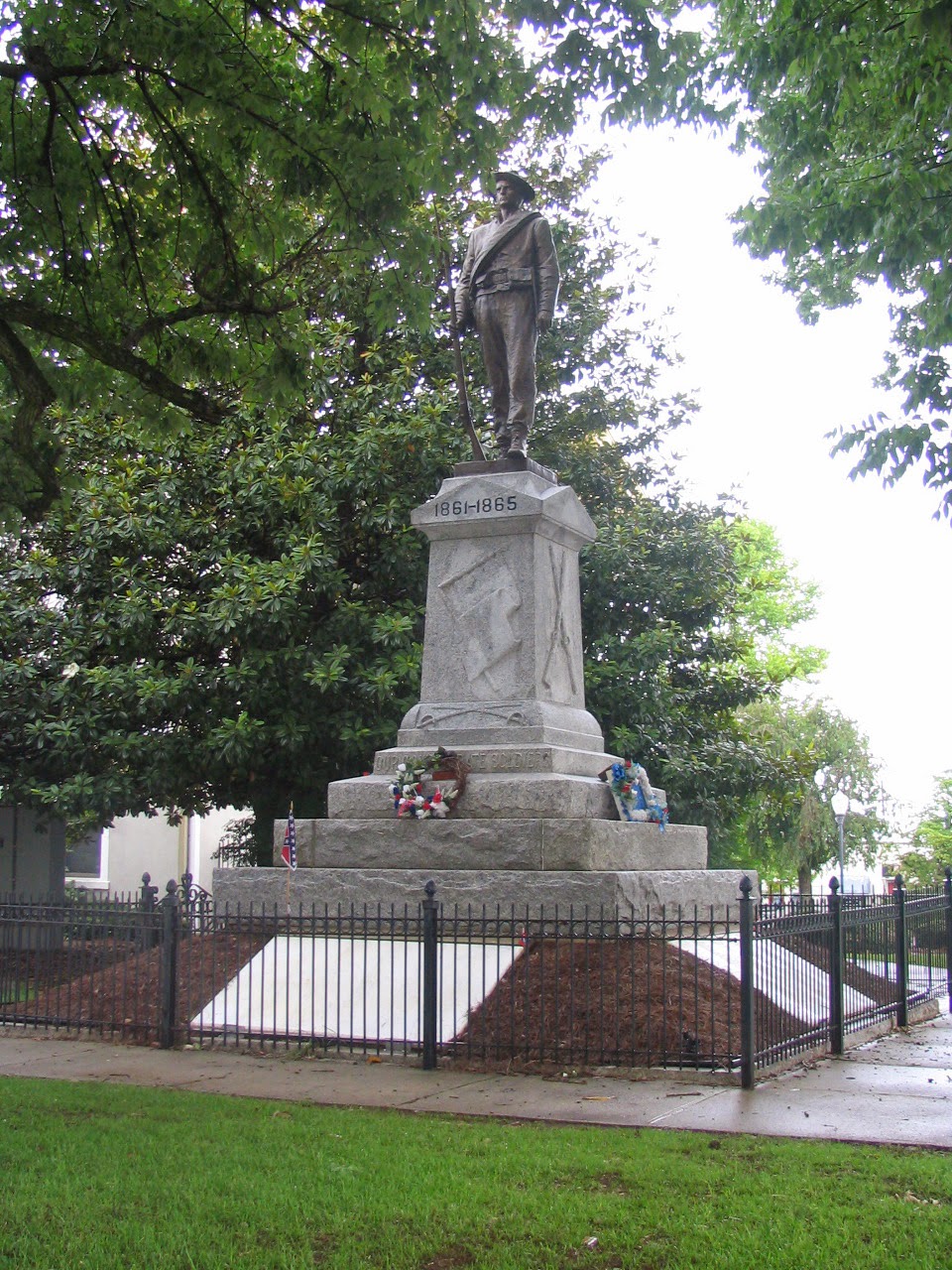 Among the casualties at the Battle of Gettysburg, one in FOUR who died were from the army of North Carolina.

There are continuing arguments about the political correctness of honoring Confederate veterans.  My beliefs are relatively simple.  The Confederate flag, rightly or wrongly, has become a symbol of extreme racism and its presence (except in historical museums) is offensive.  It should not be displayed.  Monuments, however are to honor men who died in service.  They are part of our heritage and should not be ignored.

Posted by NCmountainwoman at 10:12 AM

Fabulous post! The names of all veterans from Burke County are carved on tablets at the Morganton monument, including that of Joseph A. Denton, my great-great-grandfather. He volunteered in September 1862, and was at the battles of Chancellorsvile and Gettysburg in 1863. His unit was heavily engaged on July 1, rested for the most part on July 2, but then joined the units under command of Johnston Pettigrew for the so-called Picket's Charge on July 3. My ancestor survived all that fighting unscathed, but his luck ran out in late May 1864 along the North Anna River. A mix-up in orders sent some units forward unsupported, and many, including him, were captured. He spent many months at Point Lookout, MD, prisoner-of-war camp. In the spring of 1865, he was paroled and sent back to the community of Enola in Burke County, where his wife and children resided. His daughter, Mary, born during the war, would tell the stories he recounted to her children, including my grandmother Flossie, who in turn would tell them to me. I honor his memory, if not the cause for which he fought.

Well said Carolyn. I agree with your conclusion on these symbols and remembrances of the past.

Sacrificing of a life should never be forgotten, regardless of the circumstance.

The supreme sacrifice for belief is what is being honored and it should be. I really wasn't aware of NC's role in the war. This seems like a lovely tribute.

It is a lovely tribute. I do agree with you about the flag and what it has come to represent. Such interesting times we live in.

This is really interesting. I didn't know about the Blue Ridge Parkway's tribute to the Civil War Veterans. I also was not aware how much NC played a role in the war. What an interesting posting.

You make an excellent point. I know that for many the Confederate battle flag is a symbol of heritage -- but for others it stands for racism.

My county (Madison) was deeply divided during the Civil War and earned the name Bloody Madison because of this divide.

I love how tall those red spruce have grown in all those decades.

You make a very good point about the Confederate flag. It's discouraging that it's become such a racist symbol.

What history! I love the idea of the forest - something that will go on living.

Linthead - I have no doubt that if we dig enough we will find that we are distant cousins. We are already kindred spirits.

Vicki - I've read a lot about Bloody Madison since we moved back to NC.

What a wonderful tribute! I like this very much, very much indeed.