Did You See Our Guv on Meet the Press?


Did you see our NC Governor McCrory on the Sunday morning talk shows?  He appeared on both "Meet the Press" and "This Week with George Stephanopoulus" specifically to discuss the effects of our recent heavy snow storms.

Had you heard him, you would have thought he was a breath of fresh air in the dirty political scene.  A moderate who is more concerned with the environment and the citizens than he is about his own political agenda.  YOU COULD NOT BE MORE WRONG.

McCrory loves to be photographed at schools.  Perhaps he thinks we will forget about his cuts in education funding and teacher salaries if we see him in school often enough. 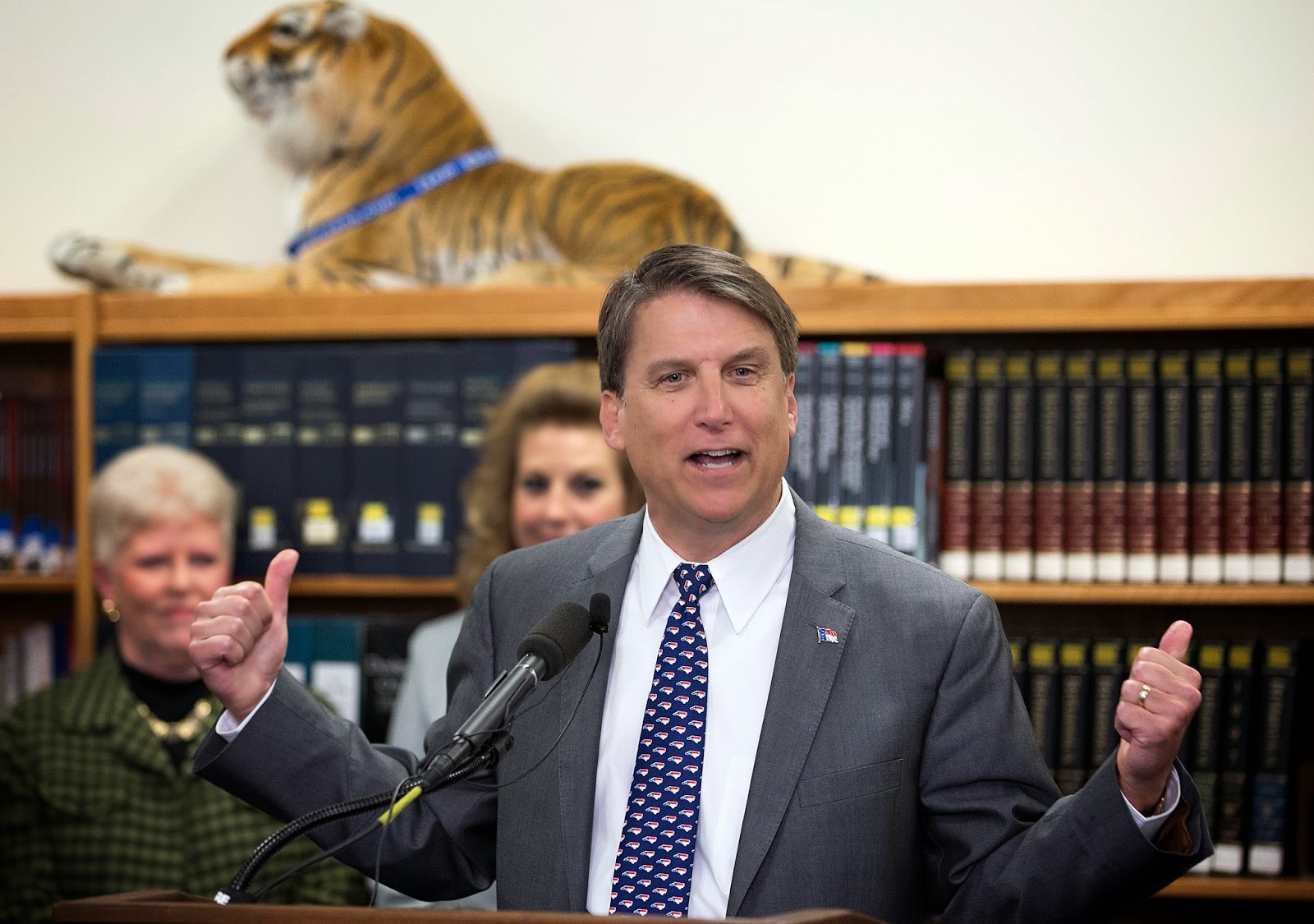 Although the appearances on television were about the snow storm, it was a given that the moderators would ask Gov. McCrory about climate change and his on-the-record statement that he doesn't get caught up in the global warming debate because he thinks it is in God's hands.  I almost dropped my coffee with his response that we should stop arguing and pointing fingers and concentrate on keeping the air and water clean.  "My main argument is let's clean up the environment.  As a mayor and now as a governor I'm spending my time cleaning our air, cleaning our water and cleaning the ground" he said.

Gov. McCrory worked at Duke Energy for 28 years.  That, in and of itself is not a problem.  But consider this:

---  Environmental groups three times in 2013 tried to force Duke Energy to clear out coal ash dumps using the Clean Water Act.  The efforts have been blocked each time.  By whom?  By the NC Department of Environment and Natural Resources (DENR).

---   North Carolina is the only state in its region that has not adopted the Environmental Protection Act (EPA) rules on measuring toxic metals.

---  The DENR refused Environmental Protection Agency grants of more than half a million dollars.  The grants were for monitoring water quality.

You may have heard about a recent coal ash spill in Eden, NC.  A pipe ruptured at a closed Duke Energy coal-fired power plant.  More than fifty thousand tons of coal ash spilled into the Dan River.  [Coal ash is the waste after burning coal and has very high concentrations of toxic metals, such as mercury, arsenic and selenium.]


Coal ash spreading across the Dan River
Yes, that is a city downstream from the spill.
Photographs from the Appalachian Voice 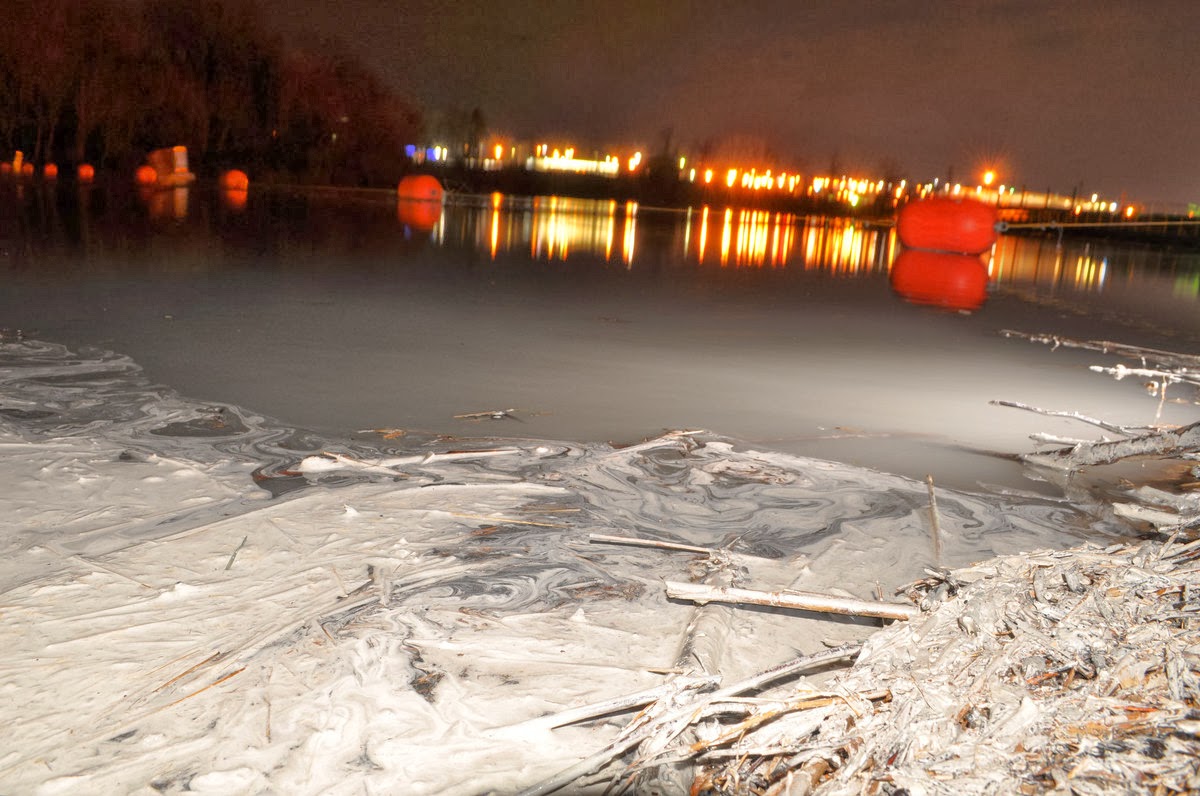 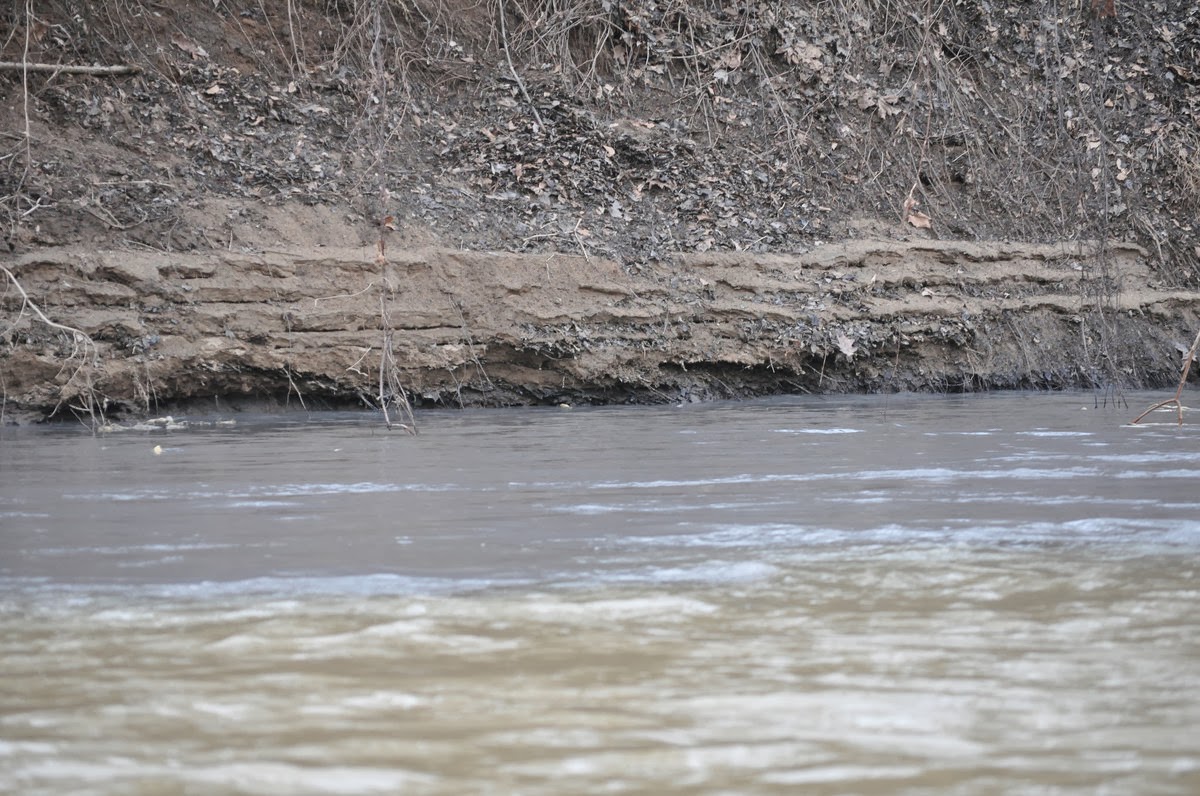 There are thirty-one coal ash ponds in North Carolina, almost all of them near rivers and many of them more than half a century old.  Gov. McCrory would have you believe that he has a good track record of going after Duke Energy for violations.  Really, Guv?

Oh, by the way; the settlement does not require Duke Energy to actually remove the coal ash from the other sites.  Just pay the penalty.

So friends, our Governor McCrory is not at all the moderate concerned green person you saw on television.  He is in favor of shale fracking in our Piedmont area where the shale is quite fragile.  He is in favor of exploring possible oil drilling off our hurricane prone coast.  He began his term by favoring big business over science.  The General Assembly passed a bill stating that NC would not accept recent studies on rising sea levels.  You see?  We are a coastal state and saying the sea level is rising would be bad for development.  Yep, that's what the Guv said. 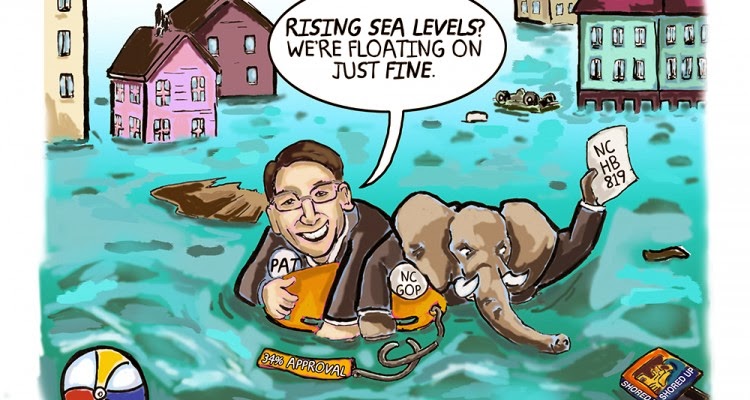 Thanks.  I always feel better after ranting.  I sent a letter to Governor McCrory after his appearance, but I haven't yet received the usual generic response.  I think he has a separate file for "That Brevard Bitch" who keeps writing, complete with canned responses.

Posted by NCmountainwoman at 11:11 AM

Just spewed my coffee at that last bit. THANK YOU!!! What a two-face. Everybody knows he is owned by Duke and coal. My aunt works for Duke, a lot of my friends do, too, but dang, they are a monster when it comes to environmentalism. Don't even get me started on "mountaintop removal"...

We did see that and could see right through the BS. I am appalled that the coal ash accident has drawn little media coverage, though perhaps not surprised. Good for you for sending a letter, sometimes it feels like it doesn't make a difference, but if nothing more if makes one feel good.

Totally cracked up at "That Brevard Bitch".
Keep up the good work gal and work your burr firmly under his blanket.

Hi there, I didn't catch the show and feel like you've given us a good answer for all his bs.
As for pickleball-it is so much fun but try to find a beginners group-you'll enjoy it more and learn lots.
Hugs,
Noreen

Wish I could see the "Brevard Bitch" file :)

Perhaps you should run for governor! You can put together an awesome argument. Thanks for setting the record straight on your guv. He sounds like an environmental disaster.

Well developed argument, and the rant is within limits with this subject matter. Brevard Beloved Bitch...keep up the good work!

Thank you for saying all this so clearly. McCrory is a disaster. And somebody has to be the bitch -- actually, we all need to bitch till things get better. Particularly with those politicians who will flat out lie in our faces.

I just said to my husband that he and I live in the wrong part of the state; that we need to be over in your area with those who see things as we do. (We live in Brunswick County, just over the Cape Fear and Brunswick Rivers from Wilmington.) My husband Allan had just recently been telling me about Duke Energy's contributions to McCrory's campaign.

When the Legislature rejected studies regarding rising sea levels we could not believe it. That demonstration of simplistic, illogical, agenda-driven thinking (if it can be called "thinking") was, to us, scary.

I am a Christian who is distressed by how so many of us follow what we are told to think without question. And we allow any politician to say anything he or she wants as long as God is mentioned. I personally see that as a dangerous trend. When the environment has been totally raped and ravaged I doubt we will accept any blame. It will all be the fault of liberals. When we are at the complete mercy of big business it won't be our fault either. We will assign culpability to the attorneys, and any other group we love to belittle and hate. And when we decide thay maybe there are hungry children in America after all, it will be the media's fault for not informing us. When we have raised a generation of children who hate anyone with a different religion it will be the fault of the public schools and teachers for not being "Christian". (If such an argument seems frighteningly stupid and irrational to you I'd say you are seeing us exactly as we are fast becoming.)

I apologize. And I will understand if you do not allow my comment to post. But I find the current mind set of my fellow "Christians" to be ignorant, obnoxious and overbearing. I allowed Governor McCrory's political use of God to cause me to do my own ranting. Shame on me.

Thanks for your comments, everyone. The Feds are investigating this and for now the hand-slapping penalty is on hold.

Lise - I think the ones who bought the governor also control much of the press.

Vicki - Even my old skeptical soul is surprised at the lies they tell. There is video evidence that they are lying yet they still stand there with straight faces.

Regenia - No apology needed. I wish you were correct about people seeing things as we do. Our county is extremely conservative and our voices are the minority. And I never delete a response unless it is hurtful to others. Everyone is entitled to comment.

Well, speak about seeing your governor on television...I live in New Jersey. *sigh* Christie was always a bully, so the current scandals aren't a big surprise around here. Our own all-Republican committee is almost as bad...boards and commissions packed with their friends, family, and Republican regional and county chairs.