We have had a perfect week of warm and sunny days with cool nights.  The dogs thrive in this weather and we have made several trips to places where they can run and romp.

They are looking at two fishermen by the lake. 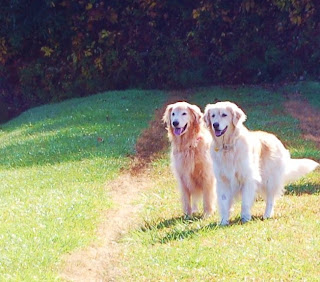 Sprinting after a recall. 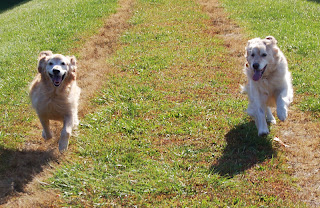 Ellie sits for a breather 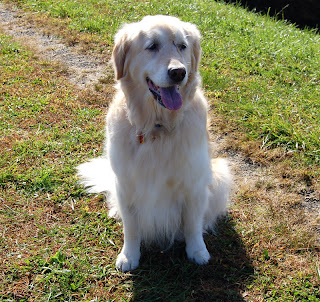 Lucy is all smiles 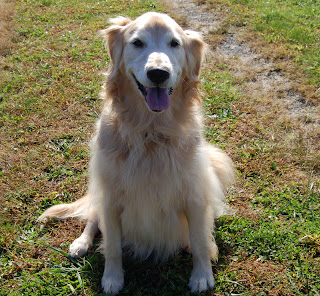 This hill is so steep that Lucy is practically crawling 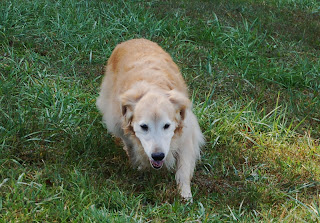 I am on a mission to have a name eliminated from the press.  There is absolutely no need to ever mention, much less quote that vicious witch with the long blond hair.  You know, AC.  The one with the evil vitriolic mouth, the mean-spirited one with the cackling laugh.  She doesn't deserve to share our planet much less be thrust in the spotlight.  So while I am a proponent of free speech, let's not talk about her.  Please.

So Ann evil one...our mailbox flag is perfect for you 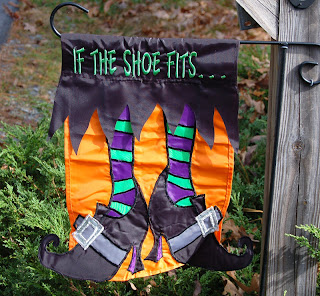 Elections are at hand.  And such a political season I have never witnessed.  And I hope never to witness again.  Many citizens are already casting ballots.  I urge you once again to learn as much as you can about every candidate.  Do not be swayed by political advertisements from special interest groups.  Look at each candidate over his/her life; learn what his/her priorities have been, and try to determine who will best represent the interests of all of the people.  As for President...much is at stake as the two candidates and their platforms could hardly be more different.  And keep in mind that some members of the Supreme Court are aging and will likely be replaced within the next four years.  And they are appointed for life.

Research the backgrounds of the local candidates.  And if your state elects justices of your state Supreme Court, do not vote blindly.  These judges will make a huge difference in the way you live your lives, folks.  And while I never recommend a straight-party ticket, if you so vote remember that you must also vote for President.  That office is not included in the straight-party ticket.

It is rare for me to quote such a despicable person...totally evil devoted friend of Adolph Hitler.  But take the words of Joseph Goebbels as a warning:
If you tell a lie big enough and keep repeating it, people will eventually come to believe it...It thus becomes vitally important...to use all powers to repress dissent, for truth is the mortal enemy of the lie.

Our political quote this week comes from essayist H. L. Mencken:
Under democracy one party devotes its chief energies to trying to prove that the other party is unfit to rule - and both commonly succeed, and are right.

Several comments from my last post wanted to know if we plan to name our new bear.  Yep...we already did.  His name is Barack but we call him Barry.


HAVE A SAFE AND WONDERFUL WEEKEND, EVERYONE!

Keep an eye on the weather and think of those in harm's way.

Posted by NCmountainwoman at 11:28 AM

I've done my research...even on our judges and I'm ready to vote. Yesterday.

I have never seen such a divisive political season. For a real eye opener, people should read, "Do Not Ask What Good We Do." It's an inside look at the real agenda behind the 112th U.S. Congress. Frightening. You are right, real and long lasting issues are the point of this election.

In a perfect world, I like to thing there is a special place in hell for she who shall not be named. She can take a former White House chief of staff with her where they can bore each other to tears with their unwanted opinions for all eternity.

Oh I had to laugh about she who shall not be named - seriously, she is either evil or crazy.

We voted Monday in our apparently Very Important Ohio. It's nice to know that our votes really mean something. I really really hope we win.

Now I'm going to calm back down by looking at the grins on those beautiful girls' faces :)

P.S. LOVE the name of your bear!

Your "girls" are just darling. I am as happy as they are with the NC weather this past week.

As to Ann C. I can only say that she (and the many like her) should be ashamed of themselves. Such outright bigotry is amazing and it is demaeaning to them too. I wonder that they can't see this...and wasn't the big Trump secret a farce? I can't believe that so-called intelligent people can buy their garbage.

Mom says the only thing prettier than a Golden smile is two!!
Happy weekend and we love your flag
Madi and Mom

Ha! I love this post! Your girls are beautiful, as always, and all smiles, which makes me smile. Give Barry Bear a big hug for me...he has my vote :-)

Your girls are just beautiful and your photos show what a fun outing it was!

I think you're right about AC--In my view she will blather anything that crystallizes in her brain. She long ago prostituted her intellect and self-respect by developing a niche where she unfortunately can and does makes a good living at it. She and Donald Trump are two of a kind!

Always nice to the girls playing outside.

We voted this morning and glad to be done with it. This is a horrible election season, so full of vitriol and negativity. Our country is horribly divided and I'm not sure if there is a common ground anymore. Very sad state of affairs.

That Carolina sunshine sure looks great in the Golden's hair!

Ah, the golden and gorgeous girls. They positively glow with health and happiness.

I did my research and voted by mail. Our phone has stopped ringing. Thank goodness... but today the Tea Party sent us a mailing. They must be desperate.

Barack the Bear! I love it!

It appears to me that lying and meanness are growing in stature in this country. Could this eventually lead to all politicians escalating their lying in the future to win at the game of politics? Like your Halloween sign and yes I think the shoes would fit AC quite well. - barbara

I love how they both seem to be smiling in every photo. :c) Indeed... this election matters, and well... AC just doesn't.

Oh Carolyn, I know this election season is awful. The wicked witch is the most mean spirited person I have ever heard. I wish people like her would not have a platform.
Love the bear's name, perfect!!!
Good quotes as well.
My husband reads the polling data out loud to me...it is an emotional rollercoaster. (I don't need his additional updates, I read enough of them on my own!!)

The girls look so happy....and why wouldn't they??
Love that you named your bear, I will sleep better tonight! :)
Have a great day!
XO

I am so tired of all the lying ads. I have already voted, after having done my research. Now I'm a peace with it and just hope for the best possible outcome for our country.

And as for She-Who-Must-Not-Be-Named, she is doing a horrible disservice to our country and it's citizens. I truly don't understand why people pay her any mind.