Not surprisingly, Transylvania County celebrates Halloween in a big way.  The day begins with the Vampire Run with most participants in costume.  And all day long there are vendors, games, contests, activities and music in downtown Brevard.  We especially enjoy watching the children, most of them in costume.

This guy was moving so fast I didn't catch his full photo but I thought it was a great costume. 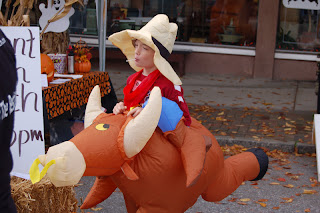 Only the bravest would enter the toy store (O.P. Taylor's) underneath this giant spider. 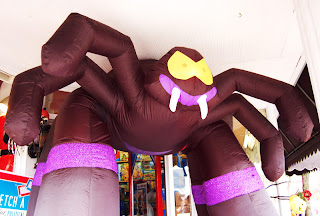 One of many Batman costumes.  He was obviously delighted to pose. 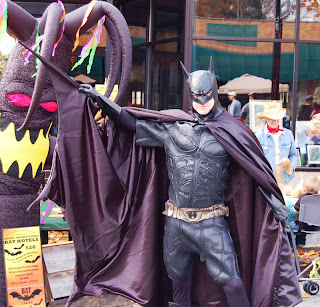 John Deere tractors for tots.  This little guy didn't even ask anyone to hold his binky. 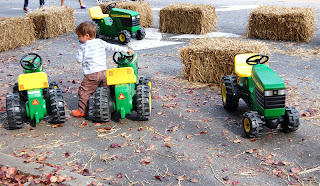 Hunger Games quests abounded.  (Much of the action was filmed in our county.)  This was an archery target as the children tried the Hunger Games survival tactics. 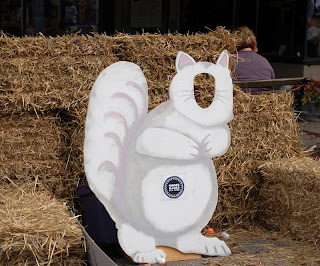 The Great Pumpkin Roll began at the top of Jailhouse Hill.
(Wouldn't they roll better if the stems were removed?) 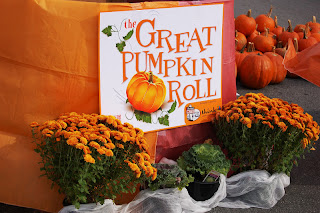 Despite the many children's activities, this little toddler was content to play with one of the cones. 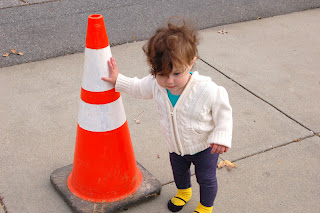 I couldn't help but wonder how one distinguishes the relevant truths from the non-relevant ones.
I should have attended the services to find out. 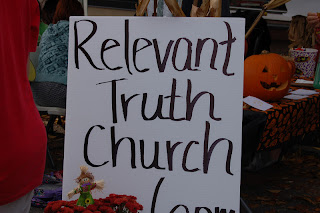 I love going to these small-town festivities.  The folks are always so friendly.  It's nice to live a town where  several blocks in the center of town are closed to traffic so the people can party.

Our thoughts go out to those affected by the monster storm that is hitting our eastern coastal areas as well as affecting even more of our country.  Our weather here has turned winter-like overnight with high winds removing the last of the autumn leaves.  Our dogs love it and we don't mind.

Posted by NCmountainwoman at 2:51 PM

Oh my goodness that looks like such fun. Mom and Dad would love to live in a small town like Brevard...in fact that had been their plan to move after retirement but ....she says life happens and plans change...maybe someday.

thanks for your comment about G-ma
They have told us that and that it can take 4-6 weeks. I guess we have to be patient now if we can just get her to eat MORE....
Hugs madi and Mom

You're letting your intelligence show again! I believe irrelevant truths are the staple of the television news programs.

Hi, Living in small towns is so fun; we have several parades throughout the year and always have fun. I am glad you haven't been affected by the storm, other than winter weather. But just in case, stay safe!
Hugs, Noreen

Love the photos! Aren't you expecting some snow? You need to take photos and share them with me, please.

Looks like great fun. The toddler with the cone is especially precious.

Fun indeed. We came to love living in the country with a small town close by. I think I'd only be more confused attending that church believing as I do that relavence is relative...:)

A fantastic costume parade. My favorite photo was the young child leaning against the cone. Nice post -- barbara

I can pick up on the good spirits of the town from your photos. It does look like good fun. I guess that the stems make the pumpkin roll more challenging!

I used to live in a small town and they had festivals at the drop of a hat. I loved that and miss it.
Love your pictures too.

What fun! I wish you'd attended that church to report on it to us!

That costume of the little bull rider is very cute.

Thanks for your comments, everyone. No snow here but lots of it in the neighboring mountains. We had lots of high winds taking the remaining leaves off the trees. I was intrigued by the church, but snapped the picture and walked away before I could be indoctrinated.

Great festival!! Glad you all didn't get the large amounts of snow.

I can't wait to live in a small town and attend festivities like this!
I din't know The Hunger Games was filmed there. Did you see the movie? It was quite disturbing to my psyche....so much so that I've had a couple of nightmares about it. Yes, I'm fragile like that. :)
Enjoy your weekend.