Staying on the Learning Curve

Had you asked me anything about John Brown last month, I could have given the answer quickly:
That extensive level of knowledge comes from one of the few times I ever gave John Brown a thought.  The information is recalled from my high school American History class.  Our textbook devoted two whole paragraphs to John Brown and the raid on Harpers Ferry.  It was accompanied by a sketch of the armory at Harpers Ferry.  We studied little about the raid and its real implications and did not touch at all on the man himself.

So what have I learned about John Brown since last month?  Tons.  For instance:
How did I come to know all this (and MUCH more) about John Brown?  I read Midnight Rising, written by Tony Horwitz.  I am a lover of history so I might be a bit prejudiced but I truly enjoyed this book.  Thoroughly researched and annotated, the book flows as easily as a novel. 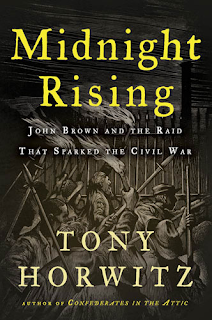 I have listed only a few points but unless you are a history professor or buff it is a certainty that you will learn a great deal about the Harpers Ferry raid and what it meant and how it affected our nation's history.

I have often repeated that one of the very best things about retirement is having the time to read.  At a given time I usually have three books in process; a novel, a biography, and a non-fiction book.  When I started reading Midnight Rising I did not read anything from the other two books in process.

Next up?  In the Garden of Beasts by Erik Larson.  My husband enjoyed this story about the American Ambassador to Hitler's Germany in 1933.  And on the shelf waiting a turn is LOST IN SHANGRI-LA BY Mitchell Zuckoff.  Another true story about WWII, this book details an amazing rescue mission in the Pacific.

I hope you can find some time to read something that expands your knowledge about our country.  I think it was Mahatma Gandhi who said, "Live as if you will die tomorrow.  Learn as if you were to live forever."
Posted by NCmountainwoman at 11:20 AM

Harpers Ferry is only about 30 minutes from us, and is one of my favorite places to visit. Not only is it a beautiful spot, but it's so interesting to visit and see how the story unfolded. Your post makes want to get the book, because I think I would appreciate it that much more!


PS: Many thanks for your kind words on the loss of our boy Jake--They meant a lot...

Well first of all, I love the Tony Horwitz book, Confederates in the Attic. Loved it! I'm off to see if I can get this one on Kindle. Thanks. I'm trying hard to boost my library ahead of all of the political adds sure to make my eyes (and ears) bleed.

My eyes give me fits on the computer and I can enlarge that print. It doesn't work quite the same with a book. I miss reading actual books. I also miss being able to remember what I read. Sure makes it cheaper, though. I could read the same one, over and over, and it always seem new to me!

sounds like a fascinating book! I can think of a couple of folks besides myself who would love to read it.

I've read excerpts of Lost in Shangri-La and promised myself I would purchase the book. Although, tomorrow IS library day....

I know, isn't retirement great for the scholar in us?

You definitely make me want to read a lot more history. It's interesting that I studied physical anthropology in college, particularly the evolution of primates, but did not take a single history class. My "history" studies went back thousands and thousands of years, but left me wondering about the things that shaped our country in the past 200 years. Yes to retirement and the time to learn new things.

Sounds absolutely fascinating. I am a new lover of history - especially when the books are dynamic and interesting. Thanks for pointing me in this direction!

The quote you attribute to Gandhi seems to be one that appears in various forms by different people. Here are a couple:

“Do your work as if you had a thousand years to live and as if you were to die tomorrow.” Mother Anne Lee (founder of the Shakers)

Each of the versions is good advice. Jim

I also love history. I knew most of these things about John Brown, but I'll look into this book anyway.

I also love american history and autobiographies are my favorites!!!

I was floored very early in your post. Your recall of high school history is absolutely amazing!!!!!

The book sounds fascinating. Thanks for the recommendation!

I did not know much more than your original version, especially that a'mouldering part. I just love that word and have been known to use it at coctail parties.
Anyway, that sounds like an interesting book and I will look for it. Thanks.

Oh that sounds like the purrfect gift for a Diva to give her history loving Dad!! Thank you for the idea!! I'll pass it on to my personal shopper
Hugs Madi

Well done! There are far things worse than being "prejudiced" towards history. :) As my other blog shows, I have a similar inclination. I read some novels and other genres but always go back to the best writing. Someplace in the last couple of decades the best historians must have decided that writing good history did not require it to boring....

I don't remember hardly anything from high school except it was awful~~~ scary place!!!!

Thanks everyone, for you comments.

Kim - Great that you are so near Harpers Ferry. I would love to visit it sometime, especially after reading this book.

Rudee - I am also a fan of Horwitz. And I love to hear him speak. I know what you mean about the political ads. We have a ready finger on the "mute" button whenever the TV is on.

Ms A - I bought a book at our local bookstore. When I got home and started reading it, I realized I had already read it...in fact still had my copy of it.

Robin - I took several anthropology courses in college as well. Amazing that so many of the "facts" I learned then about the evolution of man have been overturned by recent findings. When I took anthropology, we had a clear linear approach to evolution. Now we know there were many branches and dead ends on that path.

Wayfarin' - Yes, the quote or similar ones have been credited to many individuals, even Aristotle.

Arkansas Patti - Now those must be SOME kind of cocktail parties in which you can find a way to use a'mouldering.

Troutbirder - I've always wondered whether it was the text or the teacher that often made such a fascinating subject as dry as toast. I do agree that some of the best books around now are history. And they became more interesting in the 1970s forward.

This sounds well worth reading -- I've read a fair amount about John Brown and would like to see Horwitz's take on him.