They usually appear much sooner.  Last year they were vandalized.  So I feared the Pumpkin People would not make their presence known this year.  Fortunately I was wrong.  They are back, still waving at folks passing by on US 276. 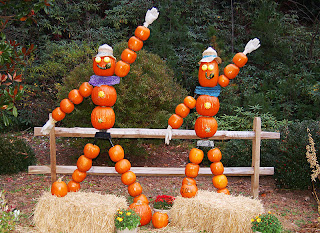 A never-ending smile must be difficult to maintain. 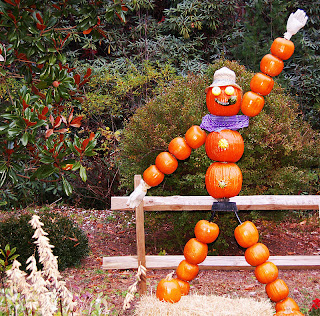 Not to mention a hand held in a perpetual wave. 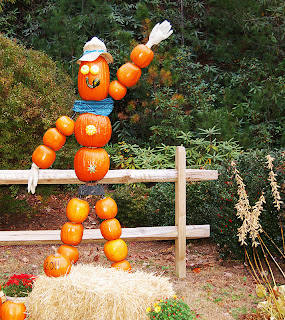 Brevard is the county seat of Transylvania County.  Last week's District Court session included an appearance by "Uncle Buck," charged with selling non-tax-paid alcohol (called moonshine, or 'shine around these parts).  Some of the charges against Uncle Buck were dismissed.  He pleaded guilty to three counts of posessing and selling non-tax-paid alcohol, possession of drug paraphernalia and simple possession of marijuana.

The judge ordered a suspended sentence of thirty days and Uncle Buck was ordered to serve unsupervised probation for a year.  Most of the citizens of our county breathed a sigh of relief.  Hardly anyone wanted the judge to be harsh with Uncle Buck.  We are happy to see him carving his bears with a chain saw and chatting with people who drop by his place.

One of Uncle Buck's bears provides a welcome sign to visitors.﻿ 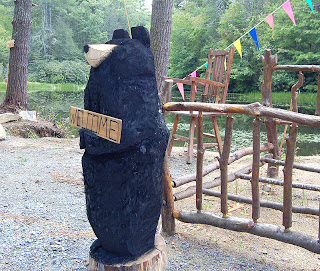 Posted by NCmountainwoman at 9:46 AM

Two win-win situations in one post! I love those pumpkin people.

I'm sure Uncle Buck is glad to be back to business as usual.

Good that Uncle Buck is not in Jail !!!!!!!!! He needs to be more careful!!! LOL
I love the pumpkin people!!!! They is neat!!!
I hope bad people leave them alone!!
I would love an email from you one day.
fern.reed@gmail.com

I'm glad to see the Pumpkin People again, even if they are late. Uncle Buck must be well-liked in the community to receive such a sentence for those charges.

Love the pumpkin people - they make me smile. And Uncle Buck does too :)

Pumpkin people AND Uncle Buck... back to shine on another day!

I like Uncle Buck's bear. The pumpkin people are neat! It sounds as though Uncle Buck is well liked in the community.

Power to Uncle Buck. Recken' the judge didn't want to cut off his own supply? ;-) Jim

Looks like the Michelin Man went on a diet.

glad Uncle Buck is back in business...:) and not in jail!
xoxo
so, our gov has announced a special jobs session this past week....except, there is not one job producing bill in it........they know that his time in office is coming to an end...so they continue to ram through bills that ALEC, and other special interests have directed....it really is unbelievable! but as you know, is happening all over the country.....arg! i feel strongly that we will get more than enough signatures to recall him! (they were trying to pass a bill the other day saying that the signatures collected would have to be notarized...) it was dropped, but we were ready regardless....

Those pumpkin people are priceless.
So glad for Uncle Buck that justice was gentle.

Yay! The pumpkin people live on! Great to see them again -- it's becoming my Halloween tradition to gaze upon them.

I had some shine when I was in your neck of the woods -- quite mild tasting and affecting. I was surprised -- I think I was expecting to be knocked off my block.

Now that I've visited, when I look at your blog title photo, I really "get it." Such incredible mountains. I hope to return!

So glad Uncle Buck was treated fairly...you know sometimes *someone* just wants to prove a point and the undeserving can suffer.
Yeah for the surviving pumpkin people!!!

My kind of people. Always smiling, waving and friendly that is.... :)

Thanks for your comments, everyone. Even the people who were not sympathetic to Uncle Buck did not want to see him receive a heavy fine and/or sentence.

kks - I almost fear reading about Scott Walker. I get angry this far away.

Tara - I think 'shine tastes different depending on how it is made and by whom. Seasoned moonshiners can tell the proof of the 'shine by shaking the bottle and looking at the pattern of the bubbles.

Thanks for visiting my blog. I love your area of NC. I live just south in Anderson, SC. Wish I had seen those pumpkin people. What a cute idea!

Deborah - Uncle Buck had health problems (I believe carpal tunnel among others) so he moved away to South Carolina. No one seems to have bought his property yet. I'm not sure if he is alive or not and whether he still does any carving. There is a Web site called Uncle Buck Carvins' but I'm not at all sure it is our Uncle Buck. Here is the link: http://unclebuckcarvins.com/index.html