Return of the Bird

On a bright winter's day last month, Seymour the Peregrine Falcon was soaring high above Transylvania County.  Abruptly a large female Peregrine attacked him and chased him.  He was clearly injured, but continued to fly away.

On the ground master falconer Peter Kipp watched in horror as the scene unfolded.  His falcon was injured and then he was gone.  Kipp was devastated.  When Seymour did not return he contacted the media and all appropriate organizations in North Carolina hoping someone might find Seymour.

Two weeks later and more than 140 miles away, a businessman iin Hickory, NC noticed a large bird bumping on the window glass at his office.  The bird flew away, but came back and bumped against other windows.  The bird was not flying into the glass, but landing on the edge of the window and bumping as if seeking attention.

A day or so later the businessman pulled into his office driveway and noticed the bird alongside the road.  He got out of his truck and the bird immediately hopped into the open door and sat right in the front passenger seat.  The man noticed the foot strap and bell on the bird's leg and knew this was not a wild bird.  He called his veterinarian for advice and was given the number of the local wildlife rehabilitator.

The bird was so calm and seemed so comfortable that the man decided to drive to the rehabilitation center WITH THE FALCON SITTING ON THE FRONT SEAT rather than having the bird confined by the handlers.  "People told me I was crazy to ride around with a falcon in the truck, but I said, 'he looks calm...what the heck.'"

Several phone calls brought the news to Kipp who was delighted that his falcon had been located.  He immediately drove to Hickory to pick up Seymour.

Kipp and Seymour
(Courtesy photo from The Transylvania Times) 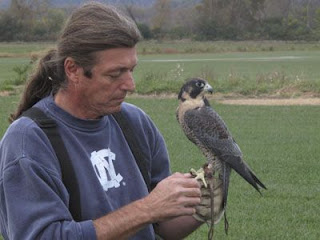 Seymour was a bit dehydrated and hungry due to his injury but is improving and is expected to fully recover.  Soon he will be back at work with Kipp educating people about the beauty and wonder of raptors.
Posted by NCmountainwoman at 10:09 AM

What a fabulous story!! Falconry is a passion of mine, Carolyn. Working with Duane Zobrist, Master Falconer, and Lewisburg Boy Scouts, I did a story for Boy's Life magazine on Falconry and the Falconry Academy at The Greenbrier while back. It's a fascinating hobby, and what a wonderful chain of events leading to Seymour's return. Thank you for sharing it!!!

Great story with a great ending

What a great story!!! What a beautiful bird.

What a great and heartwarming story.... but what is it with these females? :)

Oh....I love this story! Thanks for sharing:)

Such a wonderful story and thank goodness for the happy ending!

Such a wonderful story and thank goodness for the happy ending!

What a fabulous story. Bless that business man for trusting the bird to know what's best.

I love how Seymour apparently decided to turn himself in. He was ready to go home :)

Oh My Goodness... What a wonderful story, Carolyn... LOVE it.. Thanks for sharing.
Hugs,
Betsy

I love happy endings. I wasn't sure that it would turn out ok, but it did.
A wonderful story.

What a magnificent story. I love happy endings. I'm so glad he found his falcon.

What a wonderful story. I'm glad Seymour was found and is recovering.

Oh, I love a happy ending.
He is gorgeous!!

You told this great story well. I appreciated seeing the photograph too. Thanks for sharing.

Wonderful story! The bird riding in the front seat ... oh, to have seen that!

I love this story. Good for that businessman for paying attention and acting with kindness.

Thanks for your comments.

Elora - You never cease to amaze me! Is there anything you cannot do? It is a fascinating hobby and I intend to contact Peter Kipp and see if I watch him with his birds.

Troutbirder - You always make me smile.

The falcon recognized a compassionate person. Glad the story had a happy ending.