Our Lucy is a warm, loving, affectionate, and obedient dog. She is not a mellow dog. She goes at almost everything with speed. When the dogs are running, Ellie paces herself and goes the distance. Lucy, on the other hand, sprints like crazy until she is so tired she has to stop.

Like most Golden Retrievers, our dogs seem to lack a satiety center. They will immediately consume any food that is given to them. Lucy is even worse than most. She gulps down her food in a matter of seconds. By doing that, she sometimes takes in a lot of air which leads to GI discomfort and occasionally urgent loose stools.

Our veterinarian advised us to slow down the pace at which Lucy eats her food. He suggested several remedies.

This is the food/water tray Lucy has used since she outgrew her puppy bowl: 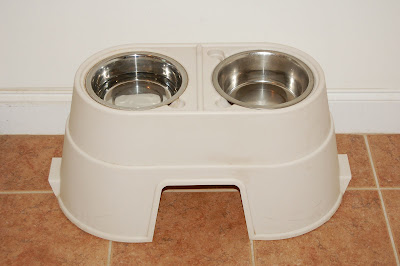 And this is the new feeding dish, one of the options our vet suggested. Made of non-stick metal, the dish has three projections in the middle of the dish. They are sufficiently close together that a dog cannot grab large amounts of food at once and wolf it down. Additionally, the dish is more narrow at the top and wider at the base. 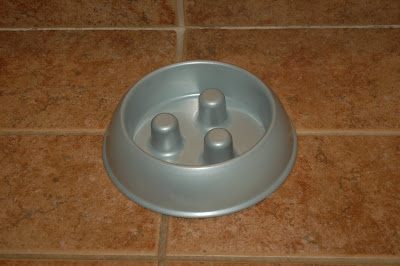 When we put the dish in place, Lucy looked rather puzzled.
Where's my bowl? 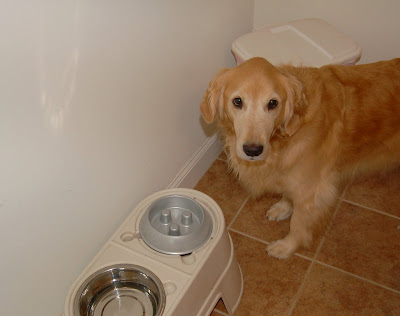 Lucy gets one cup of food for breakfast and another cup for dinner. To further slow her eating, we put only half a cup in the new dish at one time. When she consumes that we give her the other half. 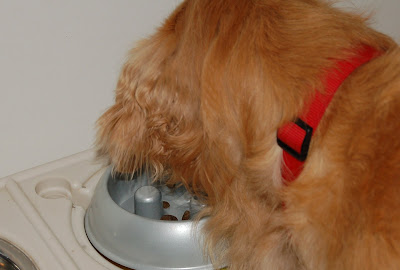 If you enlarge this one, you can see Lucy's tongue wrapping around the projections in the dish. 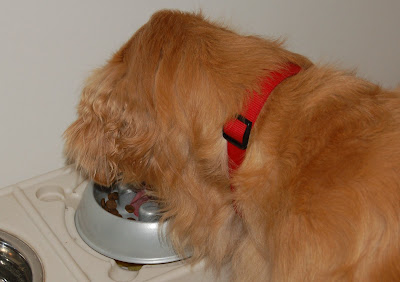 In order to get all the food, she had to keep moving to different areas of the dish. It was rather amusing to see Ellie. She ate her food at her normal pace, which is considerably slower than Lucy. She seemed puzzled that Lucy was still eating, since Lucy always finishes first and comes over to watch Ellie eat. In the past, if we didn't monitor the whole thing Lucy would help Ellie finish her dinner. And Ellie would let her. 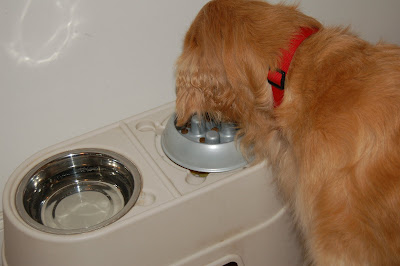 We are delighted with the dish and time will tell if it solves her problems. We already know it slows her down and that is a good thing.

This morning I had the television on while I ate breakfast. The following "news" items were discussed:
1) 20% of Pakistan is under water from flooding
2) More than a thousand people are missing and 337 people are dead from landslides in China
3) The citizens of the town of Ames, Iowa are without water after record-breaking floods caused city water mains to break.
4) A frustrated flight attendant "lost it" and screamed profanities over the planes loud speaker; then he opened the emergency exit, lowered the evacuation shoot and slid down to the tarmac.
I don't have to tell you which story got the most reporting. That says so many things about the media and what people apparently want to hear. And what it says is very frightening indeed. So this weekend, reflect on your own priorities and concerns. When you figure them out, act on them.

It's Friday the 13th. I'm not a superstitious person by nature, but be careful out there.


This photograph comes from "I can haz hot dog." 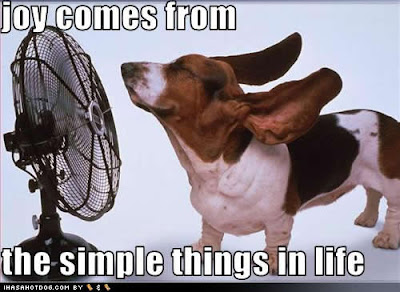 Here's hoping you will find joy as we bear yet another hot and steamy weekend. Let the work go and just relax. It's too hot to do anything else.
HAVE A WONDERFUL WEEKEND, EVERYONE

Posted by NCmountainwoman at 11:16 AM

I thought my Samantha eats fast but probably not as fast as Lucy. Samantha would however, leave June alone once she ate her food. That bowl is neat and hope that it helps Lucy with her problem.

I suppose the Slater story got the most press because it's somewhat humorous. The rest is just depressing and most humans find bad news overwhelming at times.

And this morning, in a likely arson fire in Detroit, my daughter's high school friend was badly injured when the ceiling collapsed on him and 5 other firefighters. He has a spinal cord injury and we're all so sad over such a senseless tragedy.

I may have to try one of those dishes for Leo. He snarfs his food and like your Lucy, he's never full. My last Dobie would walk away from his still filled dish when he'd had enough. Not so for this one.

What a clever solution to the fast eater problem!

Wonderful advice for all of us.

I have heard of these types of bowls before, i hope it helps your girl slow down.
I found that feeding our dogs in different areas, (one in, one out) they ate slower. I think there was a race before, as to who could help the other finish up.:)
Have a great weekend

I could use a bowl like that for my Fionnghuala. She's a super inhaler!

We are lucky this weekend with normal temps. We plan to enjoy them to the fullest.

Wonderful way to help Lucy. I had a cavalier who gulped her food, caused her endless problems. Wish the bowl had been around then.

I love the way you end your posts. So thought provoking.

The floods in Pakistan and China are horrendous. My heart breaks for the millions affected.
We can all do our bit......just by putting our hands in our pockets!!

Have a peaceful weekend.....

Don't forget about the fires in Russia!

I hope you manage to have a great weekend!

Now that is quite the dish! Someone was really thinking. Mingus won't eat if he is not hungry ... looks at it and walks away. BUT, if the other two dogs are visiting, then the food goes down pronto. Kaylee is a REAL food hound and would eat anything in sight. C's dogs are ALWAYS chow hounds. I think it is because she isn't regular with their feeding because Topsy is too. They are here at the moment but will be going home tonight.

Hi Carolyn, I have never heard of a bowl like that... You must have a wonderful vet. All dogs are different, aren't they???? You all do such a great job with your dogs... Those are two lucky little doggies... Of course, you two are pretty lucky to have them too...

You are so right about the media --and what is covered and what is not. That JetBlue guy has become a HERO to people... Good Gosh--what is happening to us?????

Have a great day/weekend.
Hugs,
Betsy

the food bowl is a great invention! i've suggested a muffin pan in the past!
my goldens gulp too, esp. Tahoe...i add a bit of water and it is just enough to make her dry food a little slippery and harder to pick up!
What? you didn't find the airline attendant story riveting?! :)
xoxo

What an ingenious idea! Why didn't WE think of that? Glad it slowed Lucy down and hope it takes care of the digestive problems.

Sigh.... it often befuddles me what gets news attention. Other than the NBC nightly and our local news, I rarely tune in anymore.

Have a lovely weekend Carolyn, and stay cool.

I have stopped watching TV news because it is all about things I don't really care about it. Oh well.

But I do agree about finding joy in the simple things.

What a clever design for the doggy dish! That should really help! Good reminder to many of us to slow our eating!

I've totally missed the news the last few days - need to catch up.

No work. Relax. Sounds good to me. And per your hidden but thoughtfully profound teaching agenda... I will continue NOT to watch the so-called fake trashy news on cable TV. :)

I think the design of Lucy's new dish is quite ingenious. I hope it does the trick and Lucy doesn't come up with a way to work around it.

It is appropriate, apropos your last remark, that there are 13 comments, and I am now writing the 14th.
I have no such superstition--I was born on the 13th--not Friday but obviously there are times when I celebrate my birthday on a Friday.
If a month begins on a Sunday, there will be a Friday 13th.

Woof! Woof! Mmmm I ate fast that's the reason why my food bowl is small.
Golden Thanks for visiting my bog on my Barkday. Looking forward to be blog friends. Lots of Golden Woofs, Sugar

I need one of those dishes for me!

That dish is a great idea. I've heard of putting cleaned rocks in a dog bowl for the same effect.
I agree with you about the press!