Another Year of Freshmen

Every year Beloit College in Wisconsin provides information about the mindset of the incoming freshman class. Most of the Class of 2014 were born in 1992. Here are some facts about them. You can find the complete Mindset List here.

- Few of these students know how to write in cursive.

- A fourth of this class has at least one parent who is an immigrant.

- Fergie is a pop singer, not a princess.

- The haven't likely seen a carousel of Kodachrome slides.

- Their computers have always had a CD-ROM drive.

- They likely don't recognize that pointing to one's wrist is a request for the time of day. They rarely wear watches but check the time on their cell phones.

-Bud Selig has always been the Commissioner of Major League Baseball.

- They first heard of Michelangelo as a computer virus.

- Ruth Bader Ginsbursg has always sat on the Supreme Court.

- They have never worred about a Russian missle strike on the U.S.

- They seldom write letters or otherwise use "snail mail."

- DNA fingerprinting and maps of the human genome have always existed for them.

- The first computers they used are now likely found in museums.

- Queen Elizabeth declared the year they were born as an "Annus Horribilis." (Though the reasons were unrelated to their births."

- There has always been a free-trade agreement with Canada and Mexico.

Check out the complete list. You are sure to find it interesting. 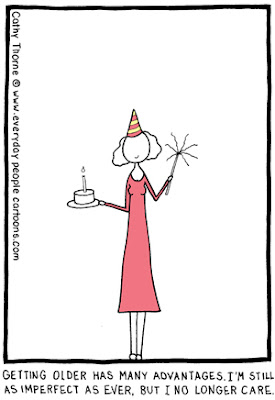 I will add one thing that was not listed. Brett Favre was traded to the Green Bay Packers the year they were born. BTW: he recently flew back to Minnesota. Wonder if he will retire? Or retire and change his mind? I do need to get a life, don't I?
Posted by NCmountainwoman at 10:23 AM

Love the card and I share the sentiment. It is one of the bonuses of growing older.

When I worked at the university, we annually received these kinds of lists on the freshman class. Always an eye opener. I am undecided if these bits of information hint at progress or not.

That was a fascinating read - thanks!

This is so funny!
Oh, to think of such things, makes ME feel old. :)

I always love that list, but I always feel so old. I was trying to explain to a totally unbelieving co-worker that the first PC I ever touched was after I had graduated from college (and it was a work machine) and that my iPad screen is bigger than its screen was. He thought I was kidding him.

That all happened because I mentioned typing term papers and using white-out - and he was confused.

Oh, Carolyn, I had to laugh at this! Also, I totally identify with the cartoon.

I used to be a college prof and my husband still is... Recently, he asked his students if the list you posted was true. They confirmed. None of them know how to write in cursive, except that they had to learn to write their signatures...

It's interesting for profs as they try to tell interesting anecdotes to engage students but the generation gap keeps getting wider and wider as a prof ages. It ain't easy.

Until recently, a woman lived nearby who had been born in about 1910 and had ranched our area for her whole life. She told me about taking a horse and carriage to go to the city (a 20 min car ride away). Imagine how befuddling the modern world was to her! We now live on a parcel that was part of her ranch until about 40 yrs ago.

Your cartoon made me laugh as I am one who is older and really don't care. In fact I think it is a fantastic time of life.

My brother introduced me to the Beloit list. I have made faux pas in the past, referring to something the students give me blanks look for.

Wow! Eye opening for me. The wrist watch thing really struck me -- especially because I do that a lot as I neither wear a watch nor carry a cell phone.

Years ago -- I mean YEARS ago I was talking to a young woman and mentioned having that as a child I'd had to take naps in the afternoon because of a polio scare and she said, "What's polio?"

Gosh ---this post surely makes me feel OLDER than DIRT for sure... BUT I feel sorry for these young people. They don't know how to entertain themselves --or play "Kick the Can" --or sit at a dinner table and talk to the family.... Or sit and read a book...

Everything for them is about cellphones, X-boxes, TV for entertainment, texting, iPod, iPad, iTunes, etc. etc. etc.

I hate to say this but I think I'll take my life--where I went outside and played with friends... I sat and read books... I listened to music.... I had such a good life... I wouldn't trade it for anything....

BUT--if THIS much has changed, I wonder what things will be like in our country in 50 yrs.... Thank Goodness I won't be here to know or see!!!!! ha

This list is always interesting, and it reminds me of how much things have changed. I can definitely relate with the cartoon, however.
I've given up trying to figure out what Brett Favre will do.

What an interesting list and I do "remember when" but I just don't know when some of it was but then the freshmen don't know that! :-)

That's a great post and that cartoon is right on !!!!!
Have a blessed tomorrow

and then i think of my neighbor Spike who was born in 1906! talk about change!
all ready for my classes to start next week! i have 83 students...
xoxo

Eh, I guess I am getting old too: I still write in cursive, I still use a phone with a chord (no cell), I know quotes from Dirty Harry and the Dollars trilogy by heart, and I use snail mail.

Get of my lawn you kids!

This list makes me feel like I was born in the Stone Age. As for the old saying "there is no I in the word team"... the heck with it. Welcome back Brett