I stepped outside and what a surprise! There on our deck sat a Worm-eating Warbler. We are on the fringes of its territory, but I had never seen one. Perhaps he was after some of the Kamikaze Katydids we find every morning. Because of his posture I suspect he had been stunned and was recovering. So I quickly took a photograph even though conditions were less than ideal and went inside. We have found that approaching stunned birds often causes them to fly before they have recovered. 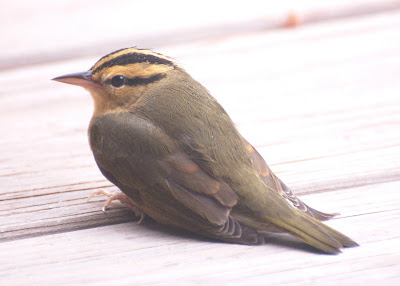 He was a beautiful bird and he took off quickly and expertly. Perhaps he was not stunned after all, but I'm glad I didn't take any chances. Interestingly enough, the Worm-eating Warbler does not eat earthworms at all. But he loves caterpillars which many people call worms. The Cornell Lab of Ornithology (here) calls this bird "drab." To their credit they do mention that he is "elegantly marked." I thought he was beautiful. And another lifer. And right here on my deck. And we're not even getting the migrating birds yet!
Posted by NCmountainwoman at 10:42 AM

I think he is gorgeous as well.
Who does not know the difference between worms and caterpillars??? PFffffttt. :)

A Worm Eating Warbler seems like an unfitting name for such a beauty. -- barbara

He/she is certainly elegantly attired! Some of us just get nicknames we can't shake! Worm Eater indeed! Cute story! Love your empathy for his welfare and so glad he was able to take flight expertly!

He's not drab, just a little subtle in places. And elegant enough not to grub in the soil for worms but to pluck the caterpillars from the trees. Strange name for him.....

I suppose the bird may be 'drab' up next to tropical birds, but come on! That's one beautiful bird.

I too, don't find that bird drab.

Have a great day.
Hugs,
Betsy

Drab, drab.....they must need spectacles, such a lovely little bird.
I am glad he was not stunned and managed to fly away.

Tku for dropping by sanctuary, that is so very kind of you.

I have in fact started another blog.....I missed the contact.
You can find me at
www.cheryl-taketimetosmelltheflowers.blogspot.com

Gotta love those lifers. Way to go Carolyn! He is a beaut.

That's a beautiful bird, glad you got a pic before he flew. It's always exciting to see a new kind of bird.
Have a blessed week

Indeed he is elegant! I'm glad he wasn't hurt.

Have never seen one -- great capture! He's quite handsome.

Marvelous addition to the Life List and a lovely specimen. Lucky you!

You are haveing wonderful luck with the lifers. Now that classes have started, I have little time to birdwatch unfortunately.

I've both never heard of one or seen one, and I think he is beautiful! Drab? Just look at that lovely coloration on his head. Lucky you that you got to see this outside your door!

Your deck gets the most wonderful visitors. He is a beautiful warbler, very distinctive indeed!

Pretty! He may not have been stunned, but his butt was certainly dragging. I know the feeling.

I'm not sure I would call this bird 'drab'. I'm glad he was able to fly away without any problems.

Beauty! What a great close look you had!