Swallows in the Mist

We have had intermittent showers since Friday. With more than 6 inches of rain in 72 hours, we have some areas of flash flooding with the French Broad Basin swollen out of its banks. Our entire community is shrouded with dense fog or mist. Good for the flora, but not so good for photographs. I knew it was time for the Barn Swallows to nest, so I ventured out anyway, knowing the pictures wouldn't be all that great. Foggy pictures are better than no pictures.

I have no idea why anyone would object to having these delightful birds around, especially given the number of insects they consume every year. But apparently some people don't like the idea of the birds flitting about so near their precious children in the swimming area. You figure.

I caught this guy bringing mud to work on his nest. He glared at me and I was happy he wasn't able to speak. I don't think he had very kind words. (Enlarge to see his expression.) 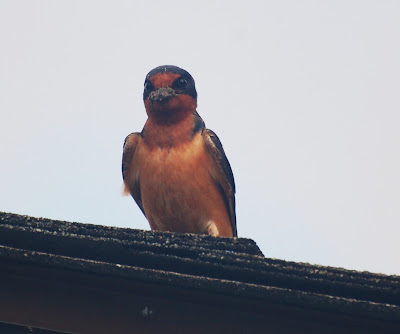 Inside, another bird is also bringing straw and mud. The nest looks almost complete. Note the screening this year. It's plasticized and superior to regular screen. Of course, not all the swallows are deterred. 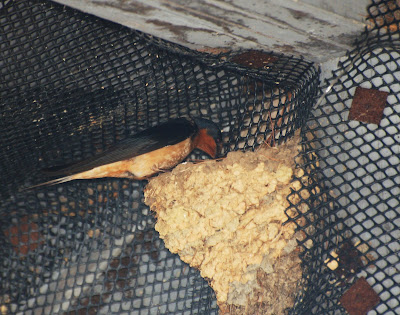 The swallow packs the straw deeper into the nest. 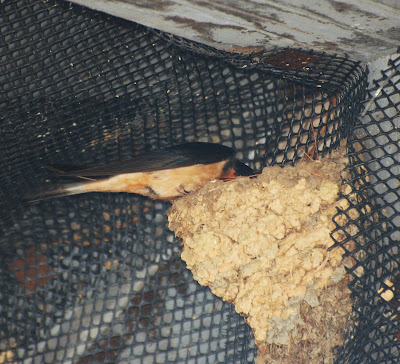 Still a bit leery of my presence, the bird continues working with an occasional glance in my direction. 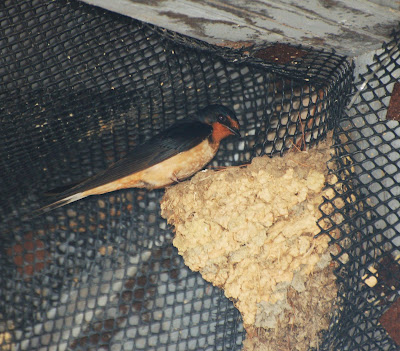 The swallow settles down inside the nest to pack the materials, or maybe to take a rest. These nests are hard work. 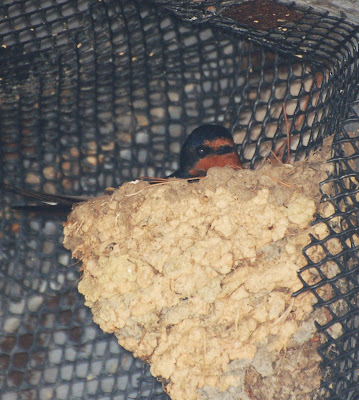 On the opposite side of the cabana, another swallow is carrying nesting materials as well. 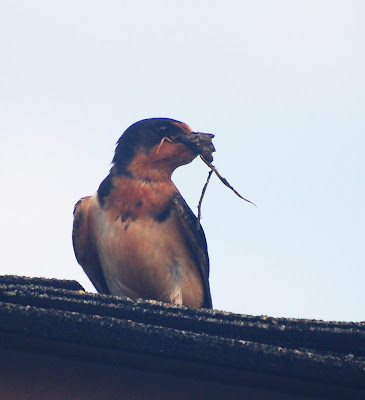 He has chosen to build outside the cabana under the eaves. 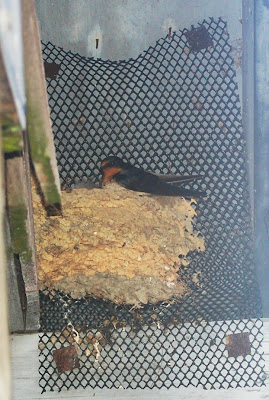 I saw ten nests in various stages of construction. It was wonderful standing there in the mist with the swallows flitting around me as they did their work. After a while they became accustomed to my presence and some of them flew inches over my head on the way to their nests. It was a good time. Just me and the swallows.
Posted by NCmountainwoman at 9:06 AM

We have those Carolyn and we've been calling them Chimney Sweeps!
They hatch two times every year. The first one have feathers and are almost ready to exit the nests!
I talked about your girls in my new post!

You are right about that first photo. He doesn't seem all that pleased with you. If he didn't have his beak full, I imagine he would have given you a nasty chirp or two.

The local community college has tried to rid some of the campus buildings of the swallow nests because the swallows defecate all over the sidewalks. I don't see a problem with that, but for some reason the students and faculty did. I think we could all put up with a little bird poop to see these magnificent creatures build their nests and tend to their young.

I love them too. But up here in lake country, people with boat lifts and cover don't care foor them.

I love their tenacity!

Wow! That's a lot of rain. That bird doesn't look too happy with you. Great pictures!

Cute pictures! You don't get to see a swallow being still that often. I sure wouldn't object to having them around...they're fun birds!

I think you got some wonderful pictures even if it was foggy. I definitely agree with you that the first bird does not look happy, but I'm glad they got accustomed to your presence. I hope you'll be able to enjoy the swallows throughout the season.

we had a nest under the eaves of our workshed but they have not come back this year. Great photos and hopefully they will be safe in their nests.

I think the swallows are so cute, Carolyn. Love the look on that guy's face... I'll bet you DON'T want to know what he was saying to you... ha ha

Seems like the Swallows are winning that battle for a nesting place. Good for them!!!!! Guess the fecal droppings could drive people crazy--who might be 'under' the birds..Oh Well---tis life..

YOu are so lucky to be able to get so close to those Barn Swallows. So cute!!

I can't believe how much rain you have gotten! I hope for sunny skies for you soon.

I am amazed that people would not like these delightful birds around....I do hope the nests will not be removed, and that they will be able to have their young in peace....

Our swallows are nesting in a neighbours stables......we all welcome them, and find them a joy as they sweep across our gardens collecting insects.......

I can tell by your writings that you are totally in touch with them....keep us posted please I would love to see their young......

Beautiful!! Great shots! I love the swallows. Thanks for sharing such a wonderful moment with just you and the swallows. Very nice!

What industrious birds to build such tough nests. They're beautiful birds too but my favorite thing about them is their swooping flight.

Barn swallows like to nest over an entrance to our local post office. Someone complained and asked that something be done to stop the swallows. The Postmistress told the customer to use the other door. Yahoo!

This was great to see - love these photos of the swallow's nest building! They are quite the little construction workers! I don't know why it would bother anyone to have these birds around....they just need to be EDUCATED I think - LOL!!

Who's in charge of the maintenance? Tell them how wonderful swallows are. Stick up for them.
I love the first bird pic--oh, is he ever po'd at you. BUG OFF, LADY.

I liked the Post NC! Very intresting...it is pretty amazing the work they put into the nests. thank you for sharing! :)

What a lovely post - I felt as though I was standing in the mist watching the swallows with you. They must be persistent, that's for sure. How long will they nest before the fledglings fly?

You do get the rain! We sure could use some it is so dry already.

I'm happy to let those swallows eat the mosquitoes. I do hate those suckers! All the bugs seem to be out in force right now.

I am always in amazement at what swallows can do with just saliva and mud. I hope the little birdies do well.

He looks ready to spit his mouthful of mud right at you!

Swallows are a joy, I think, and can't imagine anyone not wanting them around.

Carolyn: Wonderful photos of the swallow and the nest, so nicely captured.

Thanks for the pictures. I have never seen a swallow up close. They dive bomb our pool surface at exactly 7pm every evening. I imagine they have a schedule, going from pool to pool. Feeding time at ours is 7 pm:)

Nice photos--would love to have a swallow around here.

Beautiful pictures. I would be happy to watch some nest building and cannot imagine trying to deter them from nesting. We have had a very rainy week here...nice to have moisture, but not nice to be stuck indoors in the evening.

Wow! What a fantastic series (glad you ventured out in the fog). My neighbor just let me know a barn swallow has started building a nest on her porch! ...hope all is well with the rain...that's a lot in a little time. I've seen a lot of flash flooding reports on the weather station.

KB - kudos to the postmistress.

Barb - The eggs will incubate for 14-16 days. The birds will fledge 18-23 days. Sometimes the first brood, like bluebirds, will help care for the second brood. I just love that.

Great photos of the swallows building a nest. We have a pair flying in and out of our garage and around the house. I know they're nesting, but I can't figure out where!