The Fledgling is a Red Crossbill - One for the Record Books!

Sometimes when you look out, you just can't believe your good fortune. That's the way I was in early April when I saw a Red Crossbill at our feeders. First it was a mature male, then a first-year molting male, and finally a female. It was a rare sighting for our part of the country and we were delighted. Soon other Red Crossbills joined them and we expected to be treated to their presence for only a short while.

Most of the crossbills headed for parts unknown, but two males and two females stayed around. The local birders were excited with their presence since they were on the lookout for proof of a breeding pair of Red Crossbills in our area. We kept watching the crossbills to see how interested they were in one another. The male and female always came to the feeder at the same time. Good sign. When the female flew away the male always followed. Another good sign. We actually saw the male feeding the female. A REALLY good sign.

And on May 13, 2009 we saw proof positive that we indeed had a nesting pair of Red Crossbills. They brought two fledglings to our feeders. 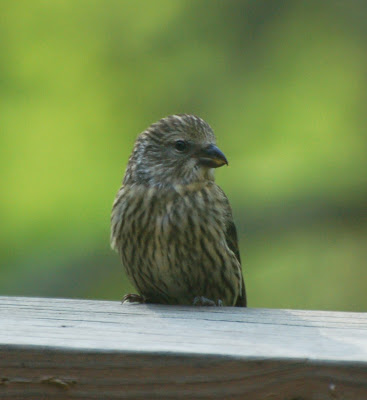 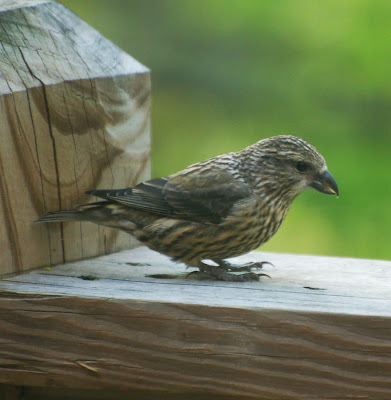 Baby #2 flew to the feeders since Mom had breakfast all ready. 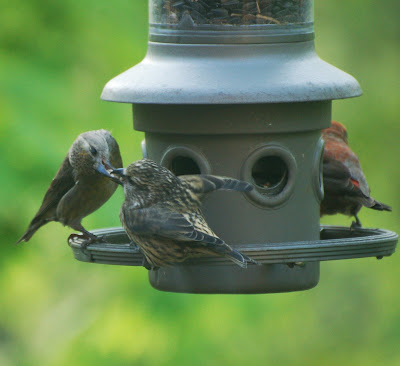 Mom called down for Baby #1 to join the family meal. 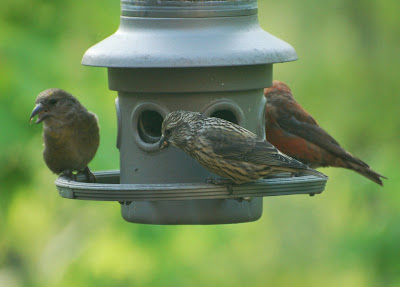 Baby #1 refused to budge from the deck railing and looked at the rest of the family. The little bird simply didn't feel up to the short flight and landing on the feeder. 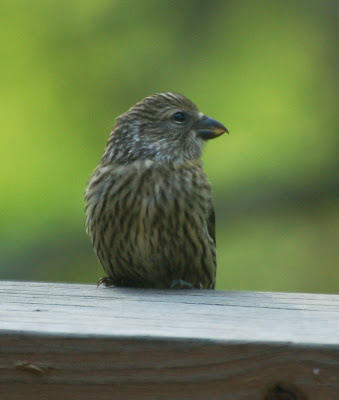 After a few minutes, Dad came to the rescue and flew down to feed little Baby #1. 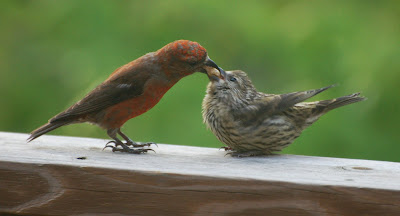 The fledglings are very different from the parents. Their bills are sharply hooked, but not quite crossed. I would never have recognized them as Red Crossbills, but the behavior left no doubt.
I sent these photographs to our local birding expert who was even more excited than we were. She sent the photographs to a friend on the state records committee who sent them to the chair of the committee.
Red Crossbills are most commonly found in Alaska, the Pacific Northwest, the upper Midwest, and Canada. They have been reported in the very highest elevations in the mountains of North Carolina and while it is assumed they are nesting, there are few definitive reports. The committee requested the elevation at our house.
I searched the Internet and the information from our community. I found the highest and lowest elevation in the community and began to estimate our altitude. I ran the answer by my husband who immediately asked, "Why not just take the GPS outside and check the altimeter?" Doh!!! (Don't you just HATE that dumb feeling? Especially in front of your husband?)
It's official. The maximum elevation on our property is 2,943 feet, lower than the lowest ever recorded for crossbill nesting in North Carolina. With an article in the local bi-weekly newspaper about our findings, we have our 15 minutes of fame in this little town. We keep watching the other pair. Wouldn't it be a hoot if they are nesting here as well?
Posted by NCmountainwoman at 7:45 AM

You are very observant and have also offered these birds a reason to stay in your area. The range of birds is always changing. Have you reported this to eBird?

This is all beyond exciting! I've never seen a crossbill and am so glad you shared all this with me/us!

what a great series of photos!

I love that your mysterious fledgling is a Red Crossbill. Is there anything sweeter than that dad feeding the baby? An incredible series of photos. I saw only one baby Red Crossbill in Washington, in the four years we were there. It was memorably cute.

Yahoo..How exciting! For you..for your area...for the crossbills! The photos are just so cool! You captured everything! Thanks.I really enjoyed this!

Wow! You did it all. What a wonderful event and post.

Oh my goodness!!!! What an amazing story...and the babies are so sweet. How lucky to have living proof of a breeding pair in your own back yard. You've made history!

What beautiful little birds. Quite the discovery. I must admit that there was one bird that I saw that I could have sworn was one not found in the area. Of course my novice birdwatching skills let me to some aprehension about reporting a claim as extraodrinary as that.

Wow, wow and wow! You must be so excited to have these birds in YOUR backyard and at YOUR feeders!!
What a find and your pictures are so good at documenting their presence!

Wow - lucky you! The pictures you shared with us are amazing. Seeing the parents feed the fledglings is priceless.

Carolyn, That's just incredible. You are so lucky to have them at your feeders. I love seeing the Mom/Dad feed the babies. Aren't they just precious??

Do you think they'll remain and try for another brood---or will they move on north after the babies can fly really good????

Keep us posted. That is incredible!!!

Have a great and wonderful day.
Hugs,
Betsy

This is just too amazing....what a wonderful experience.

Beautiful photos as usual for you!

Crossbills are such cool birds. Their crossed bills let them pry open seeds using their jaw-closing muscles instead of their jaw-opening muscles. What a cool innovation!

Wow - what a great discovery!! You are going to be birdy celebrities! Loved watching the father feed the baby on the deck railing - cute!

Congratulations on your nesting crossbills and your fifteen minutes of fame. The photos are excellent!

Great post and congratulations. We have and will see more of these records as the effects of global warming become a bigger and bigger part of our lives.

Oh my, it's a baby crossbill, that is so cool and for your to get those awsome shots, WOW!!

I have to tell you that I know nothing about birds, birding, sightings, etc., but I was so enchanted by this story. I could feel your excitement. My mom used to love doing this, and so does my brother. I never caught the bug, but then I'm a city girl. Maybe I'll buy myself a book and see what comes of it.

Yay!! How exciting for you Carolyn!

That is so very cool! I hope the second pair has some feldglings to share with you, too! Enjoy your 15 minutes of fame - what fun!

First - thank you for the comments about TG - *smiling*

second - I love those photos! How beautiful they are.

Thanks for your comments.

Ruth - Thanks. I went to ebird and placed a marker. Mine was the second sighting of Red Crossbills in the state.

Betsy - I can't imagine why they would want to leave. We have plenty of conifers and they seem to like our birdfeeders as well. I do hope they stay around, since they could possibly nest any time of year, even in winter. But it's anybody's guess. We've been here more than two years and these are the first ones we have seen.

That is very exciting. It's one thing to have them pass through, but they must like the company to have stayed on to raise a family!

Congratulations on your Red Crossbill nesting family! Amazing! Your pictures are just so sweet - you really captured that tenderness between bird mom and fledgling - beautifully done!

Oh wow, oh wow! How wonderful and what terrific photos you got! Lie is GOOD!

Wha-hoo ... how fun to break a record. Those babies sure don't look like their parents.