As the title suggests, this post is a mixture of odds and ends. Actually, the first photograph is a taste of a post to come. I do not expect anyone to be able to identify this little brown bird. With no clear view of its head or tail feathers, it would be very difficult to guess what bird this is. Suffice it to say I will provide photographs of this fledgling and its sibling along with their parents on Wednesday. 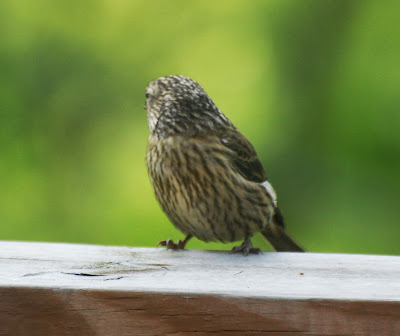 This is a new hummingbird feeder I received on Mother's Day. Shaped rather like a Ferris Wheel, it looks lovely with the bright red cups. It's a work of art even if the hummingbirds don't use it. Obviously, the hummingbirds DO like it as well. This one perched the very afternoon I put it out. 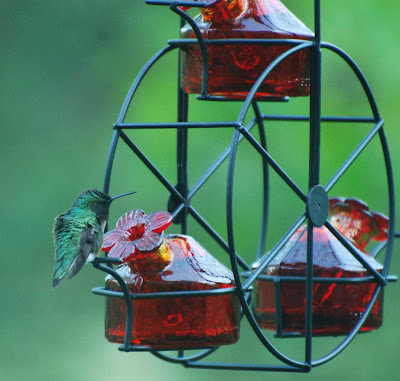 The best news of all: As of last week, drought conditions no longer exist in any part of North Carolina. For the past two years and through much of this winter, our county was categorized as D4, exceptional drought, the worst possible category. Thanks to some welcome spring rains, we are listed as D0, abnormally dry. The yellow parts of the map indicate a D0 category and the white areas have no drought designation at all. After two consecutive years of drought, being "abnormally dry" feels pretty good. It is wonderful to see the rivers and streams once again flowing normally.

Map from the USDA Drought Monitor of North Carolina

This little map shows our county in red. We are in the south-western part of the state and our county borders Greenville County in South Carolina. The Eastern Continental Divide runs through our county and the French Broad River Basin forms here. We have mountains as high as 6,000 feet in elevation. In a "normal" year, we receive 70-80 inches of rain, the highest in the state and one of the highest in the eastern US. There are areas within our county designated as temperate rain forests.

With more than 250 named waterfalls, we are called the "Land of the Waterfalls." Or as locals used before the drought, "Land Where the Water Falls." With any luck, we can use that term again.
LATER ENTRY: I should probably have mentioned that while we are not in official drought category, we are several feet behind normal rainfall for the past two years. That means that the ground-water acquifers are still lower and the danger is not past. But we are delighted to have had this much rain so far. We still have a ways to go to make up for the severe nature of the drought.

Posted by NCmountainwoman at 8:35 AM

We are so happy to see the rains (and snows) this spring. Driving through the Pigeon River Gorge (I-40) just yesterday and enjoyed seeing the river flowing so strongly.

I'm so glad that your drought is a thing of the past. Now the flowers can bloom and the water can "fall!" I like the map to see just where you are located.

Sort of looks like a song sparrow but you are right it is hard to tell without seeing the bill and tail.
I like your new feeder. I have only received one hummer visitor so far this year. It may be a little too early to expect them yet in my area.

Oh Carolyn, Glad your drought is over... You all do have the most gorgeous waterfalls..

Don't know what the bird is--but will be anxious to read you Wed. post. If it's a fledgling, it could be most anything!!!!

Have a great Monday.
Hugs,
Betsy

We've been having plenty of rain here in eastern NC. No more drought.

Woohoo! Our area is no longer even considered "abnormally dry" - in fact, only 1.9 percent of the state is still in the abnormally dry category - the rest is normal! Of course, we are supposed to have a dry spell this week (which is good because we finally get to cut the hay!)

Well the rains are a good thing then. I think I'd enjoy hiking in you neck of the woods where the water falls. The pictures are always so pretty.

As usual, I have no clue about the bird, but do enjoy seeing their photos here.

It's great that the rains have returned to North Carolina. Things are returning to normal here in eastern Tennessee as well. It's wonderful to see flowing water again. Betsy and I will have to start working on some of those 250 waterfalls.

It's such a relief when the rains come and the threat of drought recedes. I've never visited North Carolina, but the thought of 250 waterfalls is quite enticing.

I think Mother Nature is dousing us all and that is wonderful!
I LOVE that feeder!

The hummingbird feeder is beautiful and the added bonus of the delightful hummer is most charming.....what a lovely photograph....

I love to read about the area you live in....sounds so lovely....all those waterfalls, my idea of heaven.......

We have been very dry and finally had some rain this Spring. You will love watching the humming birds.

I hope to see photos of the waterfalls of NC once more on this blog.

My first hunch was a Siskin...
Love that hummer feeder. Reminds me to put mine out, although I NEVER get hummers to my yard here at home.

Fledglings already! You are a very lucky blogger. Our birds are barely checking out nesting sites...

Great news on the drought. We've had a similarly wet spring here in the Front Range of Colorado, and have gone from low snowpack levels to normal ones. That's similar to your situation because our snowpack is our water supply!

I agree that the hummer feeder is WAY cool.
I didn't know that parts of NC are considered temperate rain forest.
So, a drought is especially problematic.
Here's to hoping for rains.

Aye! I love it! rain, rain, rain and birds. I wish I was there now...Could be a pine siskin but I'm leaning towards purple finch fledgling. When I get there next March will you help me plan my garden and bring a few of your hummingbirds?

I'm glad some rain is coming back and hydrating all of you. Love that feeder, very pretty.

We were in Bryson City two summers ago, and I recall how terribly dry the area was. We had never seen anything like it. I'm glad the rains have returned and you're making your way out of drought conditions.

All this time I was thinking you were northwest of Charlotte! (I need to get a good map and keep it with me) And, I am happy, too, about the drought conditions. We moved here from DE in 2005 and have been dry until this year. It's a pleasure to notice a big change in the gardens, to see the lakes up, and the streams streaming!

I am so glad to read your drought is ending. We have had a wet but cold spring here. Now the sun is shining again

Love your new feeder Carolyn. Very pretty and indeed a work of art. :c) I also am glad for the rains, even though we've been soaked for weeks, it's a good thing.

I have almost the same feeder--and it must be from the same manufacturer, though mine is set to hang with the "wheel" in a horizontal plane, not vertical.
I hope it brings you as much joy as mine does!

Glad to hear the drought is behind you.

That bird kinda reminds me of a female red-winged blackbird. Love that hummingbird feeder - it's so pretty. We've been rainy in Michigan - maybe some is headed your way.

Glad for your moisture. I like the Ferris wheel feeder. The bird looks as though it's purposely shielding its identity!

That is the neatest hummer feeder - I just LOVE it!
I have not idea about your baby ID.
Great pictures!

Your pictures, as always, are awesome.

You are so lucky with your rain. We are having a tough time here in Southern California, and have to start manditory water rationing on June 1st. Yikes! We typically get around 10 to 12 inches of rain here a year, and we were well under that this year....not good.

Thanks for your comments. I would also have guessed a Pine Siskin had I not seen the parents feeding the fledglings.

Very pretty 'new' hummingbird feeder. So unusual, and will provide a better photo location than most of the feeders. Great Mother's Day gift.