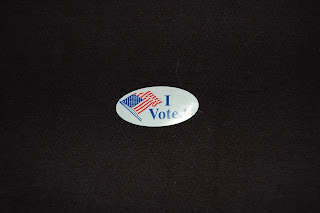 With the Presidential primaries and caucuses beginning so early this year, most of us lamented that North Carolina’s May 6 primary would be of little importance. As time progressed, we were delighted to see that we might actually play a role in candidate selection. Of course, the Republican candidate was firmly in place, but our state would definitely be important in the Democratic selection.

Since the Pennsylvania primary some weeks ago, we have been inundated with political advertisements. The three Clintons and the two Obamas criss-crossed NC, making appearances and giving speeches all over the state. The phones rang constantly with solicitations to consider a certain candidate. Television talking heads projected what the NC vote would mean. They have been so wrong so often, no one paid much attention to them. We were all eager to see May 6 come and go…especially go. Our only respite was when the candidate families flew to Indiana, which also had its primary today.

My polling place is a small community center: 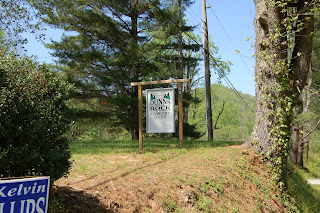 It is very different from my polling place in the Milwaukee North Shore suburb where we lived for the past 20 years. Instead of little old ladies dressed to the nines, overall-clad men were the poll workers. They were very friendly and eager to be of assistance. They clearly took their jobs seriously. There were no long lines, no same-day registration, no poll watchers and no protesters.

Most of my friends and neighbors took advantage of the early voting process. Not me. I feel as if I must go down to the polls on election day. I’ve never missed an election day since I turned 21 (the minimum voting age of long ago).
It is said that all politics is local. This is definitely true here in western NC. Note that almost all of the signs near the polls are for County Commissioner. I did not see even one Clinton or Obama sign, and few signs for the gubernatorial candidates. 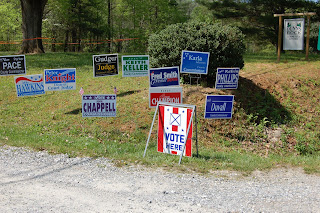 So why am I so caught up in this voting thing? Because so many people do not exercise their right to vote and it infuriates me. If you didn’t vote in your primary or caucus, don’t whine about the candidates selected.

As Franklin D. Roosevelt said:
Nobody will ever deprive the American people of the right to vote except the American people themselves and the only way they could do this is by not voting.
Or as Ralph Waldo Emerson said:
Those who stay away from the election think that one vote will do no good: Tis but one step more to think one vote will do no harm.
And my favorite byJames Bovard:
Democracy must be something other than two wolves and a sheep voting on what to have for dinner.
If you didn’t vote in your state’s primary or caucus, you have a chance to redeem yourself. Make a commitment to vote in November. If you did vote in your primary/caucus, pat yourself on the back for being a good citizen.
Posted by NCmountainwoman at 7:32 PM

I also vote in every big election and know that it is such a privilege to do so. Great post!

It really bothers me that the electoral vote can be different than the popular vote.

It also bothers me that we are given only 2 choices- and those "opposites" are more peers than what we see.

Apart from that, I totally agree with you. I have seen voting change policy on the local levels.

beautiful pictures you have here...

I was so pumped to vote in our PA primary, but I ended up too sick to work or vote and stayed in bed for a couple of days. I too have voted in every election since age 18, except for this one. These days, though, I'm often scared that my vote will not be counted or will be changed electronically.

Jayne - thanks for dropping by and for voting every election.
Tera rose - I couldn't agree with you more. Early in the debate process, it became clear that the media were determined that the candidates would be an elderly war hero, a woman, and a black man. Other viable candidates were hardly given a mention. Every insignificant thing from the mouths of McCain, Clinton, and Obama were immediately reported. The positions and ideas from the other candidates were largely ignored. It has been a frustrating time for me too.
Delia - you are excused, especially based on your track record. We still vote on touch computer screens here in western NC. Like you, I am skeptical. But for right now, it's all we've got.