Ghost in the Graveyard

I was a kid before the days of computers and super-organized sports; a time when kids played outdoors all summer long. There were few scheduled events and it was safe to play outside until twilight. One of my favorite summer games was “Ghost in the Graveyard.” It’s a variation of “Hide and Seek” in which the ghost is “it.” Whenever anyone encounters the ghost he or she yells, “GHOST IN THE GRAVEYARD” and everyone runs for home base.

I think of “Ghost in the Graveyard” every time I drive down town. There is an abandoned house by the side of the road. Within feet of the back door is a cemetery. The building is clearly a house, not a church. So why in the world was it built so close to the cemetery? Or did the cemetery keep growing toward the house? Recently, I stopped the car and got out. I did not see a “No Trespassing” sign, which I interpreted as “Come on over.” I decided to take a closer look. 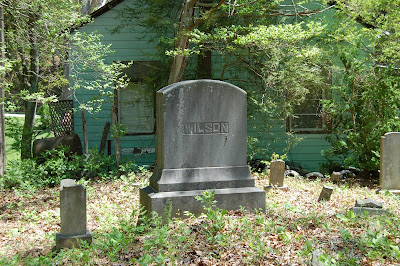 Here is the largest monument in the cemetery and it is very close to the back of the house. 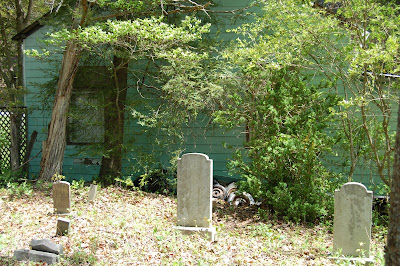 Roaming around, I found the most recent date of interment to be 1951. 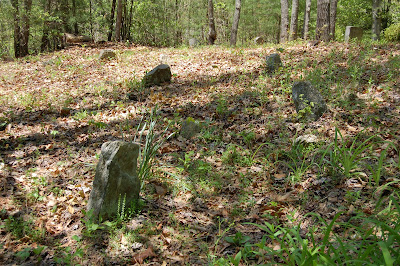 Further from the house are many graves marked simply with stones. How old are they? Who is buried there? 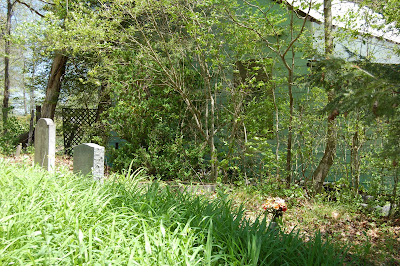 The cemetery is not well maintained, although one grave has faded plastic flowers on it.

Who put them there? And when? 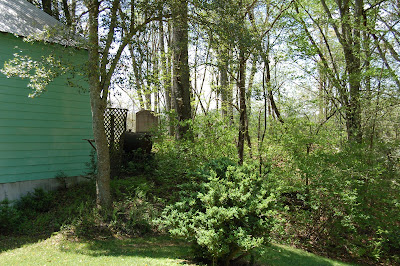 A view from the other side of the house again shows the proximity of the cemetery to the house as well as a hint of the lovely view of distant mountains.

The cemetery location was obviously chosen with great care. A quiet resting place on a knoll overlooking the mountains. But who selected it? And how long ago? When was the house built? And by whom? And the biggest mystery of all…why is the house so near the cemetery?

I will try to uncover this mystery and share it with you.

Oh, this would be a great place to play “Ghost in the Graveyard.” But then again; perhaps not. There might be a ghost, but not enough hiding places.

Posted by NCmountainwoman at 7:10 PM

There are some family graveyards on private property adjacent to farms in our region. I doubt they can be used still as there are stricter laws now regarding where you can bury a body. I always wonder what it would be like to grow up with gravestones visible through the windows. Your game sounds like fun.

Cemeteries, particularly old ones, can invoke so many questions - both the cemetery as a whole, and the individuals graves....who, how, why, when....
Your memory of your childhood game made me remember several similar simple games we played as children - far from the organized sports or repetitive motion injury video games..But I guess every generation will have its own memories - I sure hope so.

no need or no words i get to write after i saw your blog , nice blog , i suppose are you very busy with your work ,these lines is saying by your work , nice work you have done.

keep it up in forward direction

Hmmm.... that is rather odd to have the house that close to it, isn't it? Made me think about being outside as a kid from daylight to dark. Kids programming was on Saturday mornings from 8-11, and that was it. Three channels to watch, more fun awaited outdoors. Oh, the days....

My husband and I like to go to old cemeteries. They bring up lots of questions like you have posted.
My son lives in Delaware and there are a lot of the old churches that have the cemetery right in the front and side yards next to the building.

Ruth - interestingly enough, NC still allows for burials on private land. In fact, we could plant ourselves in our own back yard if we follow certain regulations.
Birdlady - I too, wonder how many great memories are being made with electronics and the like. Perhaps it's more like, "I remember the first Mario Bros."
Rohit - thanks for dropping by and the encouraging words.
Jayne - I had almost forgotten about the Saturday morning shows such as Buster Brown who lived in the shoe. And we truly did play outside from daylight until dark in the summers, running home for meals.
Toni - my husband and I have also loved cemeteries. We're still amazed when we see so many deaths in the 1918 flu pandemic, or how often in the early 1900s we see a mother and then a baby dead on the same day, apparently during childbirth.