November is almost over.  I hope everyone had a nice Thanksgiving.  Ours was very nice and the weather has been great.  Lucy enjoyed a long run in the park and a couple of shorter trips to the back yard to play in the leaves.

She has a basket of toys.  She used to forage in there and bring out a long-neglected toy but rarely does that now.  She's less interested in the tennis balls Ellie was so fond of, and she ignores most of her toys altogether.  The exception is a blue tug.  It's quite old and the center connecting piece is long gone.  She and Ellie had hours and hours of fun with it.  Our daughter bought an identical red one so they would have a replacement when the blue one finally broke.  The red one gets ignored.  Perhaps there are some good smells associated with the old blue one.  [Note to self:  take those other toys to the local shelter.]


Most often the toy is a toss and retrieve but occasionally my husband will let her win a tug-of-war. 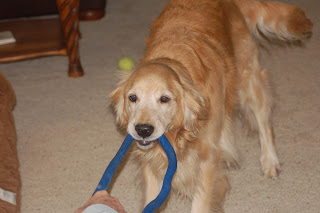 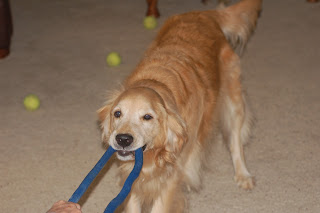 She obviously needs no toys when we are in the yard.  She runs and sniffs the air and the ground.  She especially loves it when there are leaves on the ground.  The back yard is natural woods, so we do not clear any leaves.   They are deep and fun.  Lucy loves to run through them although she hates it when they get caught in her rear feathering.

Something has caught her attention.  We have a variety of wildlife passing across the back near the creek.
Who knows what she might be smelling? 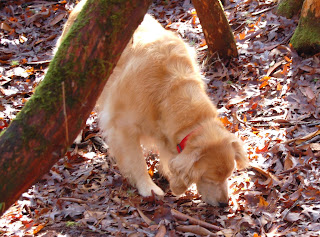 And so Thanksgiving Day was wonderful.  The only negative came at the end of the day when our Packers were defeated by Da Bears.  At Lambeau.  On the night Brett what's his name's jersey was retired. (Sorry, I have a long memory.)  In the presence of Bart Starr.  And fans suffering in the blinding rain and wind.  True to his gracious nature, Aaron Rodgers did not place any blame, simply saying that he and his receivers need to be on the same page.

Last night they did not look like they were even in the same book with pass after pass falling either to the ground or into the arms of the bears.

Today's quote come from English essayist George Colman:
Praise the bridge that carried you over.

So let us all be thankful for all those who came before us and built the bridges that allow us to cross.

Posted by NCmountainwoman at 4:02 PM

I enjoyed a lovely dinner with my two sons and the girlfriend of one of them but when it was time for football I found the door. They love it and it is a great bonding tool but not my cup of tea. Your Lucy looks like she is having such fun and wouldn't it be fun to be able to read her mind.

Glad you had an enjoyable Thanksgiving -- Full speed ahead to Christmas!

Our Goldens are the same way with toys too. They have their favorites, especially when it comes to their frisbees. And I've bought new ones, but they just aren't the same. I think you could be right about the smells and maybe even the memories that it has.

I am glad you enjoyed your special day.......and that the weather was good.

Nella and Lucy could have such fun.....Nella's favourite game is tug. Being a terrier she never gives in, will just not let go.

Good weather for Lucy, a definite plus!

So pleased to read you had a lovely day ...
Lovely photo's of Lucy, always makes me smile ...

Wishing you a pleasant and happy weekend

Always love seeing Lucy having so much fun!

Catching up with you -- love your turkey decorations and Lucy's toys. We have a basket of dog toys under our stairs and whenever things get boring, the dogs will go find a toy or two to play with. If one dog wont turn loose a toy, the other dog goes and gets another. Soon the floor is hazardous to navigate, littered with hard plastic toys and tangles of chewed up rope. And do they EVER put the toys back? No.

Sitting here enjoying the aroma of the turkey carcass simmering and planning a non-turkey meal for tonight.

We won't put up our Christmas tree for another couple of weeks and will just bask in the tryptophan glow of Thanksgiving till then.

Glad to hear your holiday was enjoyable. Lucy reminds me of my cat, but Lucy at least likes to play. Panther will occasionally get a toy from where she last hid it (I never can get them into the bin where they belong.) But her interaction toys are just something she looks at with boredom, and she may sometimes put a paw toward one, but not really play cat and mouse like other cats do. She did find clawing at the fingers of my granddaughters when they wiggled them behind the bedding was of interest.

So funny how Lucy likes only that ONE toy. So glad your Thanksgiving was nice....aside from the football debacle.

Ginnie - Sometimes Lucy looks so pensive that I really do wonder what she is thinking.

Kim - I think you are right. They always love the oldies best until the new ones are "broken in."

Cheryl - LOL Yes, those terriers are going to hold on and never give up.

Ms. A - Yes, the weather was good and now we have chilly rain and fog. But it will change soon.

Robin - Lucy really does have a lot of fun and sometimes makes her own.

Vicki - I've heard of people who trained their dogs to put away their toys. We won't decorate yet either. But I have put away all the Thanksgiving decorations. And baked the turkey tetrazzini which spells the end of this year's turkey.

Barbara - That's what cats do...whatever they want. Some seem too proud to play with toys.

Suz - She did play with a lot of toys when she was a puppy. Then she played with Ellie or with the blue tug. When Ellie was alive, Lucy tried desperately hard to pick up two tennis balls at once like Ellie did. Now she seems to have forgotten about them although she will occasionally chase after them.