No real reason for this post except I loved this cartoon and wanted to share it. It made me laugh out loud.

I have followed the late Jeff MacNelly's cartoons for years.  His cartoon, "Shoe" continues, now written by his last wife (I'm not certain but I think she was his fourth wife) Susie MacNelly and his co-worker Gary Brookings.


Known for his dark humor and political satire, Jeff MacNelly won many awards, including two Pulitzers
His cartoon continues after his death with the same flavor.
This was the syndicated cartoon for yesterday's Sunday papers.
[I could not find a way to get permission but I'm clearly crediting the work.]
(You may need to click to enlarge) 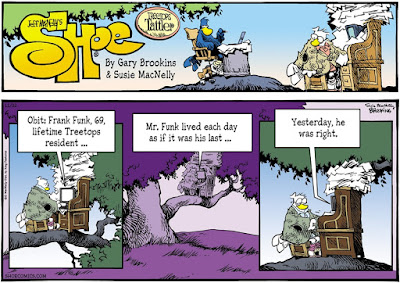 MacNelly was educated at the University of North Carolina in Chapel Hill (UNC-CH) and named his most famous cartoon series "Shoe" in honor of Jim Shumaker (nicknamed "Shu") who was his editor and mentor at the Chapel Hill Weekly as well as a professor of UNC-CH.

Jeff MacNelly was such a hard worker that he continued to produce Shoe until his death, although he had turned over the creative side of Shoe long before then.  Literally on his death bed, MacNelly was producing editorial cartoons on the very day he died.  From his hospital bed on June 8, 2000.

Posted by NCmountainwoman at 10:33 AM

I live practically next door to Chapel Hill ... so I enjoyed the history lesson that you posted ! I don't often look at cartoons but have enjoyed his over the years. Thanks.

Good laugh indeed. I've gotten away from cartoons in recent years. Perhaps I just miss Far Side too much.....

I always think those who can do cartoons are just brilliant.
Thanks for sharing this one ...

hehe - I'm always up for a laugh. Dark comedy, light comedy, whatever!