An Irish immigrant,  Mary Harris Jones became a crusader for the rights of American workers.  Born during the great Irish famine, Jones suffered during her early years.  Later she lost her husband and all four children to yellow fever.  Then she lost her home, her dress-making business and all her personal possessions to fire during the Great Chicago Fire of 1871.

Concerned about the plight of the workers, Jones became a union organizer for United Mine Workers.  She rallied the wives and children of the workers to large demonstrations on behalf of their fathers and husbands.  She continued to ignore court warnings to stop meetings of striking workers.  Reese Blizzard, a West Virginia District Attorney said of her, "There sits the most dangerous woman in America.

By the 1900s, Mary Harris Jones was known as "Mother Jones" and she traveled to Pennsylvania to aid laboring children.  The census of 1900 indicated that one in six children under the age of sixteen were employed full-time.  Usually in very poor conditions and extremely low wages.  Many children suffered significant injuries from the unsafe conditions.  Mother Jones led the Children's Crusade and organized a children's march through the streets under banners proclaiming, "We want to go to school, not to the mines." 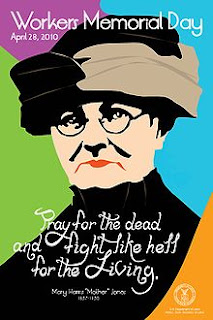 In 1912, martial law was declared after a labor dispute between mine worker and mine owners became violent.  Mary Jones refused to accept the requirements of martial law and continued to protest in favor of the miners.  She was sentenced to jail and spent almost three months in the State penitentiary.

This diminutive and feisty little woman coined the phrase that became widely popular among protesters:

Pray for the dead and fight like hell for the living.

So---here's to Mother Jones.  Her fight continues.  Give a toast to her as you enjoy your Labor Day picnic.  And then another to all the workers who serve this country.  Perhaps no one every fought harder for them than Mary Harris Jones.

Posted by NCmountainwoman at 10:57 AM

I love this story! Ah Mother Jones, we remember you and always will.

Very interesting to read this, thank you.

Wow, what a woman!!!! Most of us would have packed it in with what she originally suffered. But she didn't, she made the world a better place instead.

Wow, that was one courageous and relentless woman! Thank you for sharing the story (which I don't remember ever hearing before).

What a fantastic history lesson! Cheers to Mother Jones!

Mother Jones is one of my heroes. Granddaughter A and I were having lunch recently and there was a picture of MJ on the wall of the restaurant. It was a teachable moment since A didn't know who she was.

Thanks for your comments, everyone. Mother Jones was indeed an inspiration to us all.