I live in the forest and I love trees.  I hate tree removal unless absolutely necessary.

Last year several members of our community formed a fund-raising group to build a new playground at one of our parks.  I was all in favor of the idea.  Then the plans came out and I saw how many very large trees would be sacrificed in order to build the new playground.  I was quite distressed every time I drove to the park and saw the large-scale destruction of so many healthy trees.  I began to wonder whether or not this park was such a great idea after all.

The park was completed this Spring and I must admit I am totally in love with it.  It definitely is an example of something worth losing trees to obtain.  It's a lovely and useful and very welcoming green space.

There is a very large piece that has two stories to it.  The lower one has two short slides, a climbing ladder, a wall of stones for climbing, a set of stairs and a ramp.  The upper level has lookout space and a longer slide for older children. 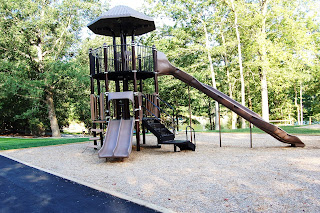 A much taller slide with fun dips and curves to add excitement to the ride. 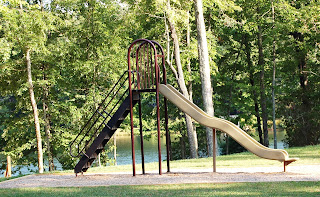 Several benches are situated for parents and grandparents to watch the children.
The ubiquitous swing set behind  and a small jungle gym to the left. 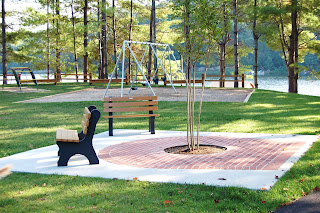 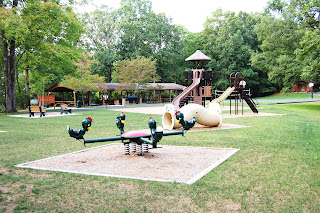 The multiple benches have plaques honoring someone gifted by donors to the park. 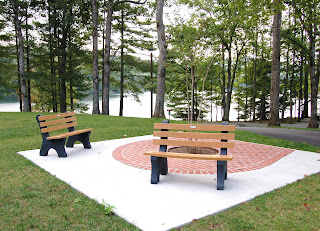 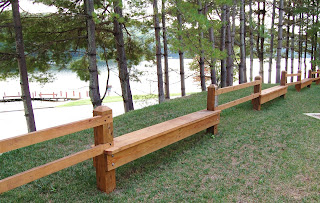 The park has a special lake swimming section for children with sandy beaches and a cabana.  There are sheltered picnic areas throughout, showers and toilets.  With the new playground equipment, it's an even more inviting place for family fun.

Posted by NCmountainwoman at 12:57 PM

It looks like they did a really great job. It's a lovely playground/park.

What a lovely space!

Sometimes the end result is worth it. What a great place for kids but also parents. I really love the idea of fence benches. How clever.

What a lovely park! Looks like a great place for young and old alike.

Trees have been sacrificed for a lot less.. It looks very well done...:)

Now that does look a great play-park ... families should have a lovely time, and it's so nice to enjoy outdoor space in safe surroundings.

I completely agree with you about trees. I never understand my neighbors who take down perfectly healthy trees for seemingly no reason.

However, that park sure looks wonderful. I bet it will be very popular for families! The only thing it lacks is a dog area ;) But you can't have everything!

How does Lucy like the new park? That would be my biggest concern!!!

KB - This is the same park where there is a space by the lake where Lucy can run free. Since we go so early in the morning, there are few people around.

Ginnie - Lucy pays no attention to the equipment. Obviously we do not take her near the play area when there are children around.

Mary Lee - That is the sunniest area in mid day. BTW: My dear husband pointed out that the caterpillar is actually a dog, no doubt a Dachshund.