Even Here in the Mountains


The NC General Assembly has been very busy in this short session.  It took only three days with no open discussion (and no debate) to overturn the moratorium on fracking (hydraulic fracture of shale to obtain natural gas under pressure from chemicals) in our state.  So much for transparency.

The new law does not have a lot of specifics limiting companies wanting to extract natural gas from our shale.  Governor McCrory is fully supportive of the new law, called the "Energy Modernization Act."  The new law prohibits local governments from making restrictions on the oil and gas exploration and methods.  The law also allows for "compulsory pooling,"  allowing fracking under the property without the landowner's consent if a certain percentage of nearby landowners have sold fracking rights.  Gives new meaning to "drill, baby, drill" doesn't it?

And this from the party whose battle cry has been, "get big government off our backs." 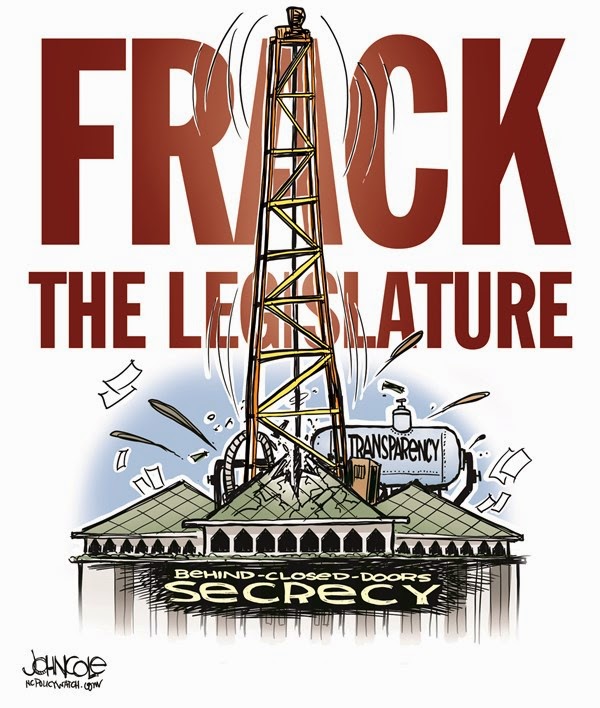 Prior to passing the law lifting the fracking moratorium, the General Assembly passed a law prohibiting individuals from disclosing the chemicals used in the fracking process.  The original bill made it a felony to disclose this information but the final law makes it a misdemeanor.  The law gives gas companies the ability to pursue criminal charges against persons disclosing what they learn about the specific chemicals used in the fracking process.  Firefighters and police officers could be forced to sign confidentiality statements in cases of accidental contamination and would be forbidden to disclose chemical exposure. 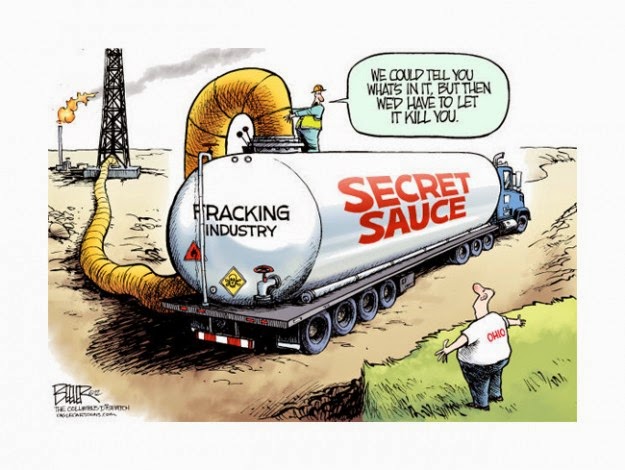 And yet one more insult to Western NC, the General Assembly has allocated more than half a million dollars to explore the possibility of natural gas deposits in seven Western NC counties.  It is of note that these counties are very near the Eastern Continental Divide.  In other words, they are near the very origin of fresh water; where the water begins.  You might ask why the state would pay for exploring the possibility of natural gas.  Isn't exploration part of the gas/oil company's responsibility?  Is it a coincidence that our Governor worked as an executive at Duke Energies for 28 years and received tremendous contributions from them for his election?  Our former US Representative is now a lobbyist for Duke Energies and many NC appointments went to former Duke Energies employees.

Someone sent me this and I can't recall who sent it or how to credit it.  But sometimes I feel as if the General Assembly is the mother bird, big oil/gas is the favored one, and the rest of us are being stomped in the head. 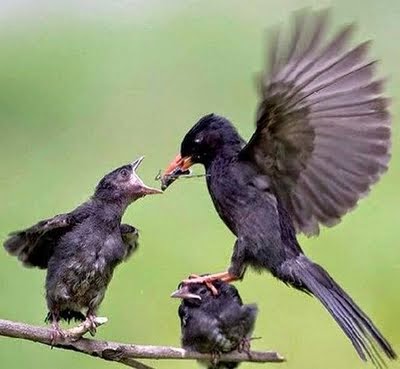 On a totally different subject, my sister-in-law was born on D-Day.  Not just on June 6; but on June 6, 1944.  She and my brother live in Oregon and to celebrate her hallmark birthday this year, she did a long zipline tour atop the trees in the Cascade Mountains.  You go, girl!

Posted by NCmountainwoman at 3:00 PM

That is extremely disappointing news coming out of your state legislature. Yikes.

The news just got worse and worse throughout your post. Illegal to tell the public what chemicals are used? Oh my.

I love that your sister Zip lined for her birthday :)

Hi there, I so understand your frustration. Here is Colorado fracking is big business. I am for the US getting oil if we have it, but can't it be attained from areas that aren't inhabited(like parts of Alaska). I am not for companies doing it in residential areas, like here in northern Co.
I do not believe that the chemicals are harmless and we've had incidence of an earthquake occurring from the waste water being pumped in.

The oil companies have way too much money and influence. We have plenty of fracking here in Utah, but at least most of it is out in the desert, away from water sources.

Too depressing. The governor and legislature are bought and paid for by Big Business. As you point out, our rights are being trampled on.

Yay for your sister!

And then there is the coal ash situation, where Duke Energy thought that putting it near water sources was a good idea. And oh yes, this from the NC League of Conservation Voters:
the proposal to slash protections for "isolated" wetlands. In North Carolina, these so-called "isolated" wetlands – ones not directly connected to running surface waters – can be the most important habitats for our increasingly threatened amphibian populations. They're usually small in size, especially in the Piedmont and mountains. Currently, state regulatory review is required for development which would drain or fill more than one-third of an acre of isolated wetland in eastern North Carolina, or more than one-tenth of an acre in the Piedmont or mountains. SB 734, the latest "regulatory reform" bill, would increase that limit to a full acre across the state, guaranteeing that most of these wetlands could be destroyed for development with impunity.

You'd think we lived in a wasteland, for all the protection the Legislature wants to give our beautiful state!

Thanks for your comments, everyone. Another big concern is that our governor is dedicated to exploring the possibility of off-shore drilling off our hurricane-prone coast.

Sadly, we in Penna. have the same debate over fracking. Our current governor is opening up state lands for fracking and thereby destroying whatever heritage those who come after us may have. Of course. the governor dresses it up as good for business.
We humans will be the death of ourselves.