His name is almost like a history.  Obviously the American/Canadian Champion prefix is because of his championship awards in the US and Canada.  The Dichi is because he was bred at Dichi Golden Acres.  And I have no idea why he became "one final chance." 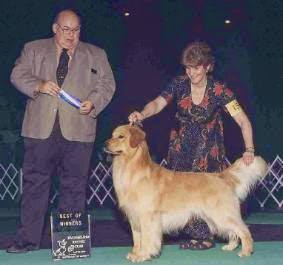 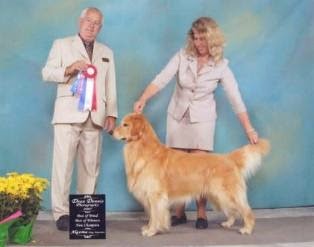 Lucy's father is described on the Dichi Website (here) as a very happy dog who loves to be with people.  He can always make you smile and has a fun-loving personality.  Our Lucy definitely inherited his personality.  She loves people and she loves fun.

When we went to select our puppy, Lucy immediately ran to my husband and started chewing on his shoe laces.  Then she ran over to greet me.  The other female went to a corner of the room.  So we chose Lucy.  After we chose her, the breeder brought out another almost identical female with a little collar on her.  He was keeping one of the females for show and breeding.  The puppy and Lucy were difficult to tell apart and the breeder said he had a hard time deciding between the two.  He had made his decision only an hour before we arrived.

Here is Lucy, already happy on her first day with us. 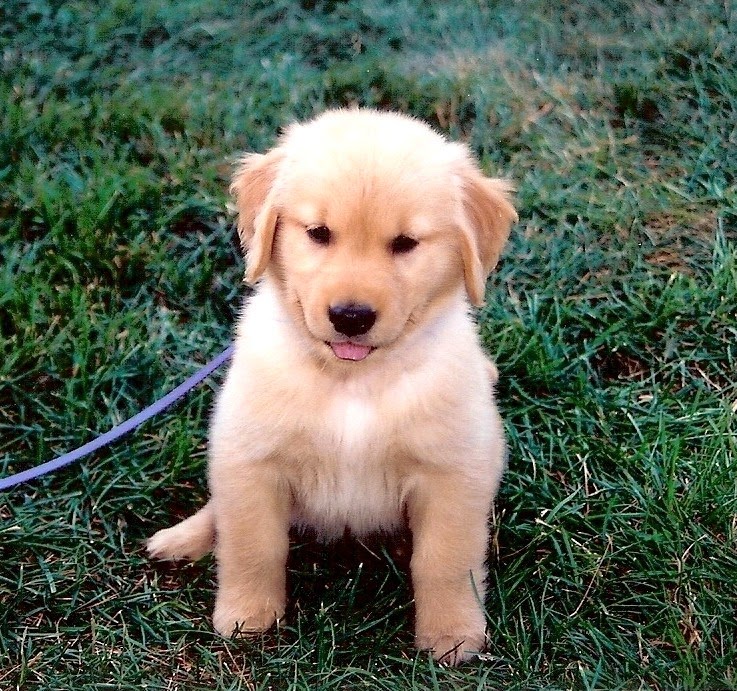 She was such a tiny little thing, especially compared to our Ellie.
(You may want to click and enlarge to appreciate the difference) 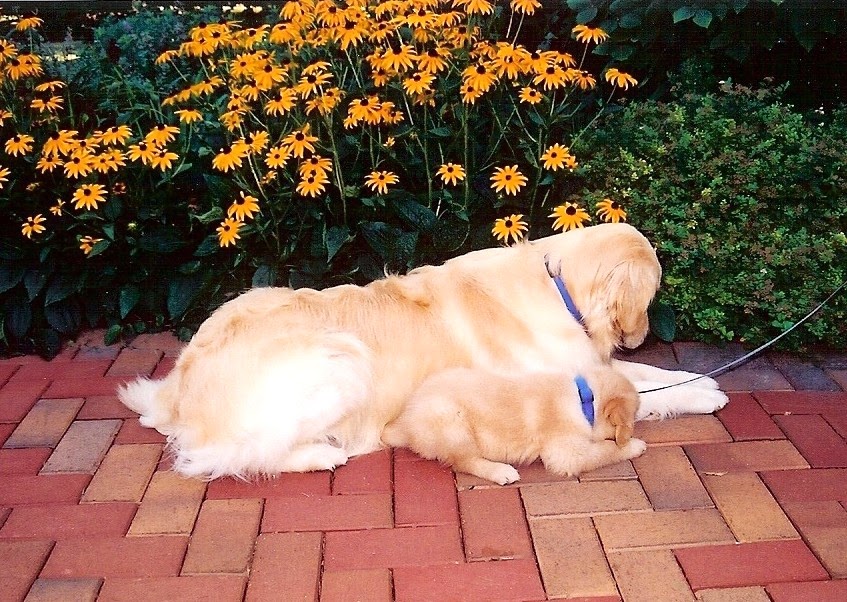 There are those who criticize people for buying from breeders when there are so many dogs available for adoption.  I pay them no mind.  These dogs were to be our "retirement" companions and we while there are no guarantees, we wanted dogs with long family histories of good health.  We wanted a pet, another dog to join our home with Ellie, another Dichi Golden.  We did not care to show or breed but we wanted dogs from the healthiest stock we could find.  We did a lot of research and bought from the best breeder in Wisconsin.  And we have never regretted it for a moment.

The quote for today is appropriate for our Lucy.  French author Gustave Flaubert said,

"Exuberance is better than taste."

And our Lucy is definitely exuberant.

HAPPY FATHER'S DAY TO ALL YOU FATHERS

AND HAVE A GREAT WEEKEND, EVERYONE!

Posted by NCmountainwoman at 11:36 AM

What a wonderful pedigree....and what a handsome chap !
Lucy was such a cute pup, adorable.

I have owned pedigree and rescue dogs. When choosing a pedigree dog, like you, I found the best breeder. As you know nella is rescue :)
Love them all each and every one of them ..........

I think of my father every day, I miss him very much.
For all those who still have a Dad give him the biggest hug on Fathers Day :)

A fine choice indeed. I've always though the best choices were personality and health. She fits that the bill for sure...:)

Always love seeing pics of Lucy as a pup. Such a little cutie pie!

What a beauty he is!

Indeed, Lucy's father is magnificent! Thank you for sharing your Goldens with us. I have never regretted for one moment coming to your blog. My love to Lucy, and thank you for being able to share that lovely picture of Ellie with little Lucy. My friend who owns a Scottie had a similar experience. Andrew chose her. More than a dozen years on, she has no regrets. I love the idea of adopting at risk dogs, yes, but I also love those who respect the breed and work so hard to maintain its integrity and health. I understand your wants and needs for retirement, and that you may well be looking for another puppy, too. You deserve that comfort and companionship, dear buddy.

What a wonderful story... I love the photo of tiny Lucy with Big Ellie. That's so precious. I also love the quote - I think it would suit my dogs too!

They are all gorgeous! I hope your husband had a nice father's day!

The picture of the two of them side by side--in matching collars, no less--certainly tugs on the old heartstrings. What beauties, both of them!

The picture of the two of them side by side--in matching collars, no less--certainly tugs on the old heartstrings. What beauties, both of them!

Very sweet post and Lucy's father was indeed a handsome champion. And, it was interesting to read how you decided to purchase a pedigree puppy for which you need not justify to anyone as they have obviously brought you great happiness and also joy which is the best dividend.