Our dogs do not growl nor fight with each other over treats or toys.  Lucy is such a little brat that many people think she rules the kingdom.  But the truth is, Ellie is the Alpha dog; the one who takes the lead in new situations.

They never fight, but they have some really great wrestling matches.  These are not done to establish superiority and there is no winner or loser.  It just happens.  One dog will look at the other and on some unseen cue they go at it.  There is no predicting when it will begin or why.  And it ends just as abruptly as it began.  No one ever gets injured.


They crash together to begin. 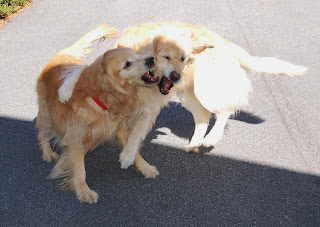 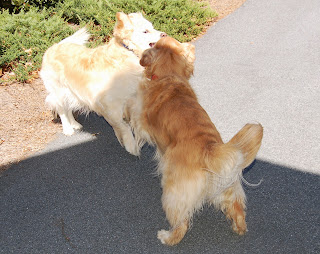 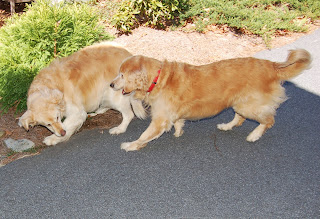 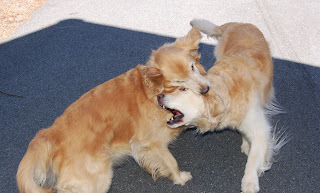 They suddenly stop and walk away from one another, each of them happy. 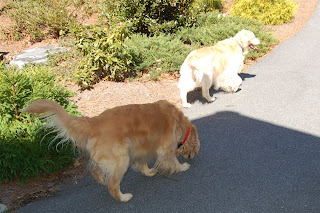 I think a good tussle (mental rather than physical)  is important in human relationships as well.  It helps to clear the air and give each person a sense of independence.

As you know, the leaders of our government are in a mental wrestling match over the budget deadlines.  Unlike Ellie's and Lucy's little matches, these are not friendly engagements.  They resemble a playground fight with angry little children pointing fingers at each other over who's to blame rather than getting something accomplished.  Little children who have not yet learned the concepts of reason and necessity of compromise.  Their most commonly used phrases are likely "he/she started it" and "that's not fair."  The perceptions of both are formulated in their little heads not often in reality.

Little children often "take sides" and support an issue without having all the facts.  They blindly follow the rhetoric and become convinced they are always right.  This is normal for children and hopefully they will learn to investigate more thoroughly before drawing conclusions.  In children we call this lack of maturity.  In adults I call it ignorance.

I can assure you with confidence that this individual has no clue about the ramifications of shutting down our Government. 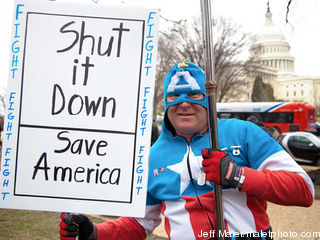 I leave you with a couple of quotes without my comment:

"I do not believe in the collective wisdom of individual ignorance."
Thomas Carlyle

"There is nothing more frightening than ignorance in action."
Johann Wolfgang von Goethe


HAVE A MOST WONDERFUL WEEKEND, EVERYONE﻿
Posted by NCmountainwoman at 11:45 AM

We are quickly descending into the dark pit of total ignorance as a nation, and you can toss in a goodly measure of arrogance as well. IMHO it's time to start sharpening the guillotine...

You speak the truth, Mountain Woman.

This political tug of war is disgusting to watch and not hardly as cute as watching your dogs tussle. I've never seen a collection of so many hard heads in once place as we apparently have in congress right now.

I agree whole-heartedly! Last night on the news they were saying that if there is a shut down, the military will not get paid. However, the congressmen will still be paid because they are "essential". Something is very wrong with this picture. We have men and women risking their lives to protect freedom and now they not only have to worry about staying alive, but they have to worry about how their spouses and children are going to afford groceries! Meanwhile you have these wealthy politicians making sure they get their check no matter what. We need some SERIOUS reform in our laws. I'm tired of the politicians giving themselves raises, while they freeze or cut the pay of everyone else. It makes me furious just thinking about it!

It is scary and sickening to think how little thought or research the shouters have given as to the effects all of this game of chicken may have.

The Planned Parenthood thing... since Federal law already says that Federal funds can't be used for abortions, what the heck is THAT hoopla all about?

I really can't even form a coherent thought about how crazy this is. But at least your dogs make me smile :)

@Elora: as a professional historian, I love a good French Revolution reference :-) You are quite correct, except that first you sharpen the filleting knives, like the fishwives and market women of Paris did before they marched on Versailles.

Dear NCMW, I made my choice in recent elections in hopes of seeing change I could believe in. I stand by my choice, but I am very disappointed at how corporatist most of our elected officials are, regardless of party affiliation, and how they bicker incessantly over pet, often petty, issues while real people are hurting, struggling, and deeply frustrated. It is as if they WANT a popular uprising!

I guess Elle and Lucy are just showing that girls will be girls! I'm glad they begin and end these tussles on good terms with each other.

A picture is worth a thousand words comes to mind with that last photo.

People should take clues from their animals.

Hi there, Such a timely post-so true! I also loved seeing the beautiful birds at your feeders.
Have a wonderful weekend dear one.
Noreen

I guess we will find out when we swing past the BRP entrance (since we never actually turn on the TV).

Appaling is what I call it.

Mom is happy it didn't shutdown this morning - her job was on the line. She agrees with you!

Always enjoy to read about your sweet furry children!!

I tried not to watch or listen to what was being said about the shutdown....I wasn't trying to stick my head in the sand, but simply ignoring the whole thing!!

Amen. The downside of democracy ...

Love your views.......they are always so topical.

You are always so timely with your posts!
Our dogs play/wrestle the same way...it is all in fun and it's great exercise for them!