Ellie loved her soft stuffed toys.  She played and played with them.  Her favorite by far was a little yellow duck which she carried around wherever she went.  She would keep it next to her and took it from room to room.  The following photograph is the last one of Ellie and her beloved little duck.  That Christmas she discovered that soft toys always have a weak spot.  She quickly destroyed the soft toys she got for Christmas that year.  Then she systematically destroyed every single soft toy she had.  It was probably her best Christmas ever and she was so proud of herself.  Other than the occasional gift from friends, no stuffed toys have been around since then.
Ellie and the little yellow duck. 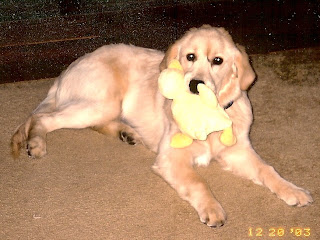 Fast forward to 2010.  We have a variety of little stuffed toys that were often left in stockings.  They aren't good enough for real decorations, so we put them in and on an antique chair we have.  They are there not so much for display, but because we'd prefer not to have anyone sit in the chair.

A Lucy van Pelt doll had been sitting on the top of the chair.  The other day I noticed she had fallen off and told myself that I needed to pick her up when I came back into the room.  That was the last I thought of Lucy.

Lucy had been sitting on top next to the reindeer. 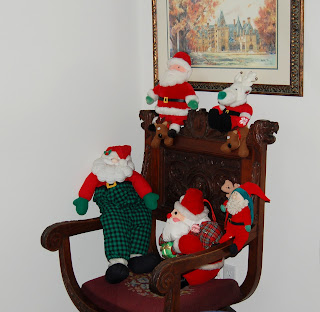 Shortly thereafter, my husband went to his study.  There sat Ellie, happily chewing the muff off the Christmas Lucy!  She must have picked her up and couldn't believe her good fortune.  Someone had left her a soft toy at last!  I do so wish we had a picture of Ellie enjoying her unexpected treat.  My husband said she did not look at all guilty, so she apparently had no idea the toy in the floor wasn't meant for her.  He took the toy away and put it up.


Here's what poor Lucy looked like.  Ellie had just begun.  She had pulled off the muff and was working on the stuffing.  In hindsight, we probably should have let her enjoy herself and destroy the whole thing. 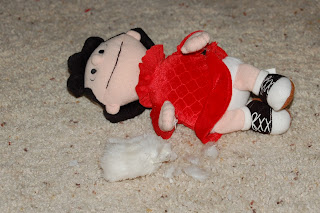 But she seems happy enough with the blue tug. 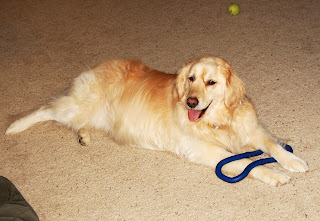 For those of you who celebrate Christmas this will be an exciting week.  In reading various blogs this month I am struck with the fact that some people are excited silly about decorating and celebrating.  Others, many of whom have suffered losses this year, feel almost guilty because they haven't caught the "Christmas Spirit."  They haven't done much decorating and feel bad that they haven't.  To these blogger buddies, I say, "THAT'S FINE!  You don't have to decorate.  Christmas isn't about decorations."  Someone once said "It is Christmas in the heart that puts Christmas in the air."  And I believe that is true.  Sometime during the season, you will indeed feel Christmas in your heart...and that's what it's all about.


HAVE A WONDERFUL WEEKEND, EVERYONE!﻿
Posted by NCmountainwoman at 1:26 PM

Hi Carolyn, Too Bad about your Lucy doll---but Ellie just thought she had been given an early Christmas present....

Christmas is alot of things to alot of people. I truly grieve for those who have lost or are losing loved ones now. I have two blog friends whose husbands have cancer and are very ill. One family had their Christmas already --since they aren't sure how long Daddy will last. It hurts me so much...

And it makes me feel a little guilty since right now, my life is SUPER --and I always go hog-wild with the decorating. Just love it --but mean no disrespect for those who can't or don't decorate.

We don't do gifts much (our choice) --so we do enjoy our decorations and our music. That makes Christmas special to us...

Happy Friday to you, My old dog, that we lost last Christmas night, loved to chew on stuffed animals. Her passion was to get the squeeker out and then pull all the stuffing out. I think it was her hunting genes. Our dear old Reggie has never ever played with any type of toy, except when we had Sadie-he'd always play with her.
Have a delightful weekend my friend!
Hugs, Noreen

Mingus loved his stuffies too until he found their weak spot. Even disemboweled he'd still carry them proudly around for days. Then I began chastising him for disembowelment so his left stuffy ($.25 garage sale item) is still intact after months! SO, for Christmas he gets a brand new stuffed bear in his stocking! We'll see how he does.

Lucy doll is really quite cute so I can see why you picked her up.

Oh, I am so glad to hear someone else's dog destroys toys. We get stuffless toys for Ziva--who goes for the vulnerable spot on any toy she has. She gnaws until she gets the eyes off of almost any toy.
Have a merry Christmas.

I love your girls - hard to be mad at a face like that! Scout has really been loving her soft toys too - she wrecked a santa tug doll I got her - it is now missing a nose and an eye. :-)

That's what I hear from most friends who have pets - they are always into mischief! LOL Good to have patience and enjoy them anyhow!

My niece wrote her facebook status - a quote from her daughter - Anna's thought for the day: "if we took Jesus out of Christmas it wouldn't be Christmas... it might smell like Christmas but it wouldn't be the same." And that from a young girl. I think that is all that's needed! None of the outer trappings are really needed to celebrate!

My Breezy always killed stuffed toys in record time - she was gentle in every other way. She also loved to "steal" toys from our good friend's driveway. They planted toys just to make her happy. Enjoy the season, Caroline! I bet there will be something under the tree for Ellie and Lucy.

Don't worry, Ellie, we all have our addictions.

Who can blame her for her mistake? Soft toys disappear here, too. All the toys I buy for Leo are made by Kong.

got my butt in gear today! (none too soon, since three grandsons and their parents come tomorrow!)

Merry Christmas Carolyn,
I hope you have a good one this year.
My birthday is next Wednesday.
I am going to post about my age.
Try to catch that one please.
Bambi use to love her stuff toys too. Now that she is 13 plus she doesn't seem to be interested. She sure sleeps a lot more then she use to.
We haven't had an inside Christmas tree in years. We do put up lights on our living room mirror and red bows so the inside looks the part.
Thanks for your visit.
XX, Fern

Lucy van Pelt never saw it coming. :)
Merry Christmas to you and yours!!

Lucy is probably wondering where in the world is Charlie Brown when I need help....

Ellie is a beauty....
Hugs Madi and Mom

I know several people experiencing a bittersweet Christmas this year. I do think all of us will at sometime or another.

We once had a mastiff whose greatest delight was to take boots from the front porch and very carefully remove the shoelaces. We would find them - undamaged - in the front yard.

Oh my! I had to laugh at the thought of Ellie finding that Lucy and feeling so lucky she once again had a soft toy to destroy!

No Christmas shopping here at all. Our family simply decided not to do gifts any longer and it makes the season so much less stressful and special. We give the boys (our nephews) money to go towards getting what they want. Simple. Instead, we gather to be together and I can focus on what the season means. Merry Christmas to you and yours Carolyn.