As the title suggest, this is a Monday morning mixture of totally unrelated topics. The weekend was something of a bummer. Promised sunshine did not appear. It rained on Saturday's Halloweenfest, our biggest downtown festival of the year. The dogs did not understand why dinnertime came on Sunday with no dinner. Both of them frequently nudged my husband's arm as if to remind him of dinner.

When our neighbor's grandsons came over for trick-or-treat, I totally forgot to get a photograph. They are usually the only trick-or-treaters we have and I always purchase three large bags of candy and dump an entire bag into each boy's pumpkin. According to their mother, the boys had become heroes of their schools when they told their friends about the "candy lady" who gives each a whole bag of candy.

There were a few bright spots in the weekend. My daughter caught her life-time biggest salmon, a Chinook, she thinks. She caught it fishing from the shore of Lake Michigan. She sent a photograph from her cell phone. This is her fish, being held with some difficulty by her fishing buddy. Yes, my nature-loving bird-watching daughter is also quite an angler. 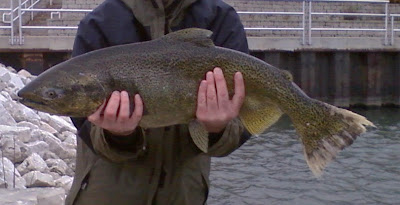 A couple of weeks ago we drove to our favorite cemetery. On the way we noticed some interesting art work on the roadside. Initially I thought it was an old truck that had run off the road. Closer inspection revealed that it was not abandoned at all. 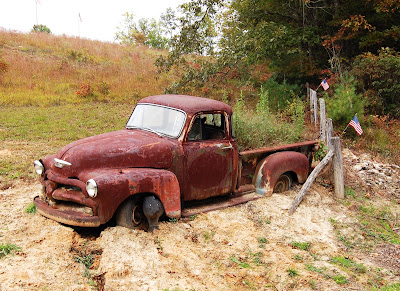 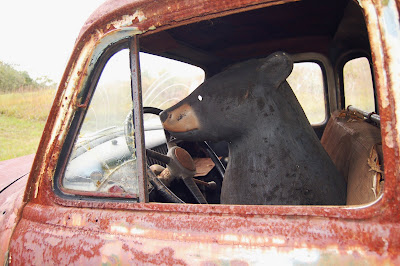 A boar peeks from behind the front wheel. 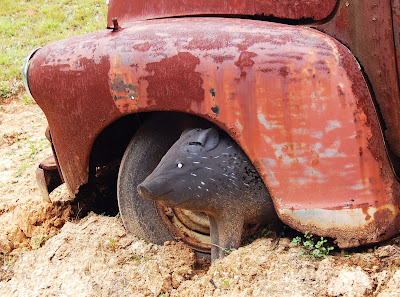 Just a bit further and we found the ultimate flower child car. This one was also driven by a bear. 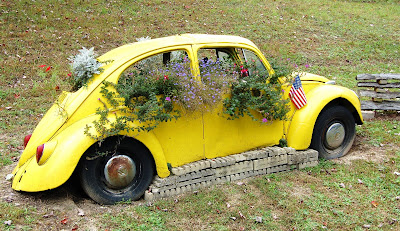 I suppose I am obliged to talk about THE GAME, painful as it may be. Brett Favre brought his Minnesota Vikings onto Lambeau Field to resounding "BOOs" from the fans. He took off his helmet and revealed his grin that says, "Keep it up, folks. It inspires me." The game was pretty pathetic with the Viking offensive line protecting Farve on each play and a receiver named Rice who caught anything within arm's reach. Meanwhile the Green Bay Packers still could not protect quarterback Rodgers, and committed far too many penalties. It was a sad day. The defensive coordinator apparently knew nothing about the blitz until someone told him late in the game. Penalties made some great plays returned. In short, if you can't protect your own quarterback and you can't get to the opposing quarterback and you add stupid penalty after stupid penalty you don't have much chance of winning.

This photograph shows the mixed feelings among the crowd. Some felt betrayed and others wore their Packer green #4 jerseys. 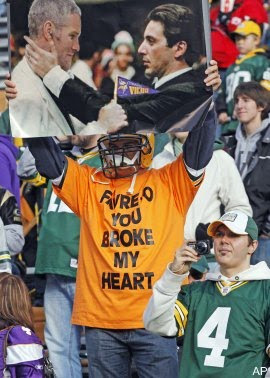 (Photo from The Milwaukee Journal/Sentinel)
A small plane circled the field with a trailing banner that said, "Retire 4 Ever."
This morning the sun came up as usual. And I'm looking forward to a much better week. I hope the same for all of you.
Posted by NCmountainwoman at 8:05 AM

I feel your pain about the Packers. It was a heartbreaking loss, but at least the torture of the face-off at Lambeau is over. Hopefully it never occurs again. Now if I can only get my miserable Bears to beat the Vikings it might improve my outlook on the central division. I know - it's gonna take a lot of luck.

Argh! I was so over Brett Farve several retirements ago! And I'm not even a Packers or Vikings fan!

It looks like a beautiful sunny day here - I can only hope to get home in enough time to catch some reamining daylight - stupid time change!

The good news is that we have bright sunshine here in Tennessee, so good weather is on the way. If your neighbor's children keep talking about the 'candy lady', you might get more trick-or-treaters next year!

That is one sweet old truck. What a beauty! Love the fish photo too -- your daughter must be very psyched.

Ah. Well. Err. Um. Yes... I thought this trade would be really bad. And mercenary type people really turn me off. Now, I hate to admit this but I was TOTALLY wrong about Brett. He is truly a fine fellow and upstanding gentleman, who definitly knows how to bring team spirit, hard work, and TRUE American values to a team. My condolences to the poor Packer, Bear and Detroit fans. After we win the Super Bowl, I hope when Brett finally does retire, in tend years or so, he will consider running for governor of Minnesota. :)

You are the candy lady... I'm surprised that the word hasn't gotten around that that you don't have TONS of visitors... ha

We kept looking for the missing sun yesterday, too. Had hope several times during the day, but it appeared only so briefly.

So funny about you being the notorious 'candy lady'
That is one large fish...so glad she got the picture to prove the tale!!

I love the car/truck art!!!

I shall have to send my grandchildren to knock at your door on Halloween night. A whole bag of sweets!!!

Your daughter certainly had a good catch. Does she throw them back?
We have a lot of fishing lakes in this area....it is a very popular sport. I visisited Lake Michegan a few years ago.......

That mobile art is so funny! What's going on with that? WOW - your daughter will have lots of salmon in her freezer! Hope your weather and week improve.

Salmon: king of fish, and it tastes so much better when you worked to catch it.

Courtney at SL's No Ennui said...

I imagine that is quite a tale for them to tell at school! I am going to pass that story on to my grandmother. She makes ghost apples every year (pictured on my post today). The last two years she has made her usual number-- around 30. And she's only gotten 3 tick-or-treaters! I will give her your idea.Of course, that might mean SHE will dump 10 ghost apples into each child's bucket! Maybe I won't tell her after all...

I love the car and truck art! With Black Bears driving. Ha!

You didn't tell us why the girls didn't get dinner on Sunday night. I'm feeling a little worried... :) Do they need a care package?

I'm a die-hard Viking fan and I wasn't too thrilled to see Brett come to Minnesota either. He waffled too long and couldn't commit. BUT-- he's been playing his heart out and has won over the Vikings players and fans. I thoroughly enjoyed the game. I think he just plays to play and plays to win.

What interesting "art" there! Love the flower car. :c)

Wow, what a fish! I love fishing too but don't do it quite as much.
Those roadside arts are very cute!
Hope your week gets better.

Courtney at SL's No Ennui said...

I can back to see if you've posted again, and the truck photos just made me laugh all over again!

I love the truck and volkswagen bug photos. I do feel for the Packers fans like you. Most of my friends are Redskins fans and I feel sorry for them too.

Thanks for commenting, everyone.

Lynne & Troutbirder - I agree that Brett is the perfect addition to the Vikings. With the best running back in the nation, a defense that can stop the other team, and Brett's throwing arm, the Vikings have a great shot at the Superbowl this year.

George - The boys are so excited when I get the bags of candy.

Erica - I'm sure that old truck did a tremendous amount of work in its lifetime.

Cheryl - My daughter is a "catch and release" fisherman. And a fish that size from Lake Michigan is likely carrying too many toxins to warrant eating it.

KB - The girls did get dinner. But it seemed an hour later because of the change to standard time.

Wow I would have loved to have come to your house for Halloween..when I was little!! I can see why you have that great name .."the candy lady"
Love all your little art pixs..esp the pickup truck with the bear and pig..so funny.